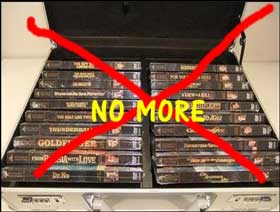 Everyday, many Filipinos arrive in Manila, bringing back with them books as well as  DVDs and CDs of music and movies they bought in other countries for their personal use.

They can do this without fear of being questioned because it’s a right specifically granted “to persons or families arriving from foreign countries” under Section 190 of the Intellectual Property Code of the Philippines or Republic Act 8293.

What these Filipinos probably do not know is Congress has just passed a law erasing this right.  The law — a consolidated measure amending RA 8293, was sent to Malacañang Palace on January 29,  2013 and  just needs the signature of President Benigno Aquino III to become effective.

Under this new law, once you modify a device (for instance  “jailbreaking” an Apple product such as an iPhone or iPad) in order to remove restrictions on what and how apps and content can be stored and used — you can be held criminally liable for  ”copyright infringement.” The amended version introduces for the first time in our criminal law the concept of “digital rights management” (DRM) – which also covers how we use digital devices on the Internet and which behaviors are considered criminal.

Penalties for “jailbreaking” and other forms of copyright infringement range from three years in jail and at least P150,000 for the first offense, and up to nine years in jail and P1.5 million pesos for the third and subsequent offenses.

If you happen to be leasing out space — for instance, if you’re a mall or building owner  — to someone who infringes copyright, you could be held liable.

And that’s not all.

If someone else had downloaded music from the Internet and shared the file with you, and you then uploaded it onto your technological device and listened to it, you could also be held liable if the download site was one that the US recording and movie companies  have been trying to shut down.

Downloading music was the sixth most popular reason for surfing cited by 683 Internet users ages 10 to 17 in a 2009 study conducted by the Asian Institute of Journalism and Communications for UNICEF.

Authorities say that downloading music was made illegal as far back as the year 2000, when then President Joseph Estrada signed the E-Commerce Act into law. They point to Section 33 of the E-Commerce Act which punishes with fines and jail “piracy or the unauthorized…downloading” of, among others, “copyrighted works including legally protected sound recordings or phonograms…through the use of telecommunication networks…in a manner that infringes intellectual property rights.”

They neglect to point out, though, that the last part in Section 33 contains a qualifying clause which states that downloading becomes illegal only when done “in a manner that infringes intellectual property rights.”

Intellectual property rights are spelled out in RA 8293 – the Intellectual Property Code.

Section 212. Limitations on Rights. – Sections 203, 208 and 209 shall not apply where the acts referred to in those Sections are related to:

212.1. The use by a natural person exclusively for his own personal purposes;

212.3. Use solely for the purpose of teaching or for scientific research; and

I will repeat – Section 212.1 states that the economic rights of performers and sound recording producers have to give way when the copyright material is for “the use by a natural person exclusively for his own personal purposes.”

What can be clearer than that? A natural person means you and me. Not a corporation.

Our lawmakers erased the entire Section 212 and replaced it with something else that no longer contains this particular exception – “the use by a natural person exclusively for his own personal purposes.”

That exception is NOW GONE from the just-approved congressional measure amending RA 8293.

Later in another post, I will show you how they did it in such a totally confusing way that it would make you quite dizzy to understand it. It took me a long while to understand it. And at the end, I thought – Wow!

I will also try to answer the question posed to me by my hubby Alan:  What do ordinary Filipinos get out of the amended RA 8293?

Just out of curiosity, I did a word search of the phrase “personal purpose” in RA 8293, our present Intellectual Property Code. The phrase was repeated THREE TIMES.

I then inserted all the approved congressional amendments to RA 8293 and did the same word search for the phrase “personal purpose”. It’s now ALL GONE.

Because our lawmakers not only excised Section 212, which I just mentioned. They also erased the following:

190.1. Notwithstanding the provision of Subsection 177.6, but subject to the limitation under the Subsection 185.2, the importation of a copy of a work by an individual for his personal purposes shall be permitted without the authorization of the author of, or other owner of copyright in, the work under the following circumstances:

(a) When copies of the work are not available in the Philippines and:

(i) Not more than one (1) copy at one time is imported for strictly individual use only; or

(ii) The importation is by authority of and for the use of the  Philippine Government; or

(iii) The importation, consisting of not more than three (3) such copies or likenesses in any one invoice, is not for sale but for the use only of any religious, charitable, or educational society or institution duly incorporated or registered, or is for the encouragement of the fine arts, or for any state school, college, university, or free public library in the Philippines.

(b) When such copies form parts of libraries and personal baggage belonging to persons or families arriving from foreign countries and are not intended for sale: Provided, That such copies do not exceed three (3).

I was greatly disturbed by that, especially after I learned that no organization of overseas workers was invited to attend the lone public hearing that Senator Manuel Villar, the measure’s main sponsor, called on March 9, 2011. My Senate sources told me only representatives from the following were invited to that public hearing:

In this case, it was the Intellectual Property Office (IPO) under the Department of Trade and Industry which had played an active role in drafting the amendments to RA 8293. And so I asked Ricardo Blancaflor, the IPO Director General,  why they felt the need to erase Section 190.1 – which specifically guaranteed the rights of ordinary Filipinos flying home from overseas to bring home copyright materials such as DVD movies, music CDs and books.

And does this mean that Filipinos could now be open to extortion at the airport and harbors when they bring in such copyright materials?

Blancaflor’s initial reply to me was the following:

“The greater good has to be served. This law is for everybody.

I think instead of people criticizing it, I think people should recognize it’s a long awaited legislation. It was done within the bounds of the law.

The good side of the law should also be highlighted. Hindi negative that some interest groups are pushing.

We should be congratulated for the great work we are doing.”

These are only some of the amendments to RA 8293.

In the next article,  I will discuss at length what Blancaflor told me and what University College of Law Professor JJ Disini also told me about the amendments’ vast implications on the listening and viewing habits of ordinary Filipinos.

And especially on their Internet behavior and the way they transfer music from the PC, to an MP3, to an Android Phone and a Pad.

The amendments to RA 8293 could make them liable and open to extortion.

I have to hand it to Blancaflor. He gave me a very lengthy interview past office hours last Friday and although tired, he was very patient in explaining the law to me. He explained how provisions – which I thought favored foreign movie, recording and software companies – were in fact “pro-Filipino.”

My thanks, too, to Prof. Disini who answered my questions for many hours. I think we were both bleary-eyed when we ended our discussion past midnight.

Both of them talked passionately about a topic that would put most people to sleep.

After realizing the amendments’ implications, however, you just might end up doing this –