Billy Esposo went home from the hospital to die, his sister Carol had earlier told me.

I could not write it because Billy might read it and lose his hope for living. I prayed that by some miracle he would again pull through.

Even Billy knew his time was running out.

It was a life well spent.

Billy was the Marketing Man who used his talents and skill to help change the Philippine political landscape twice. 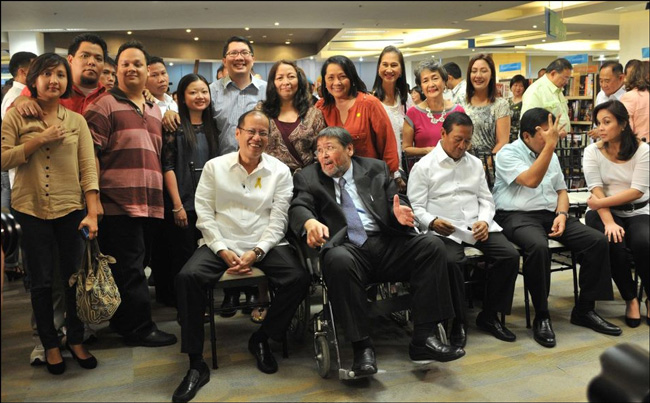 The first time was when he helped package a housewife and widow into a presidential candidate to challenge the dictator Ferdinand Marcos mano-a-mano.

It was for this reason that another woman who wanted to become President had asked Billy to repackage her. Here is an excerpt from a piece that I wrote earlier describing that incident:

Marketing man, William “Billy” Esposo, recalled how he helped position the brand “Cory” as the exact opposite of Marcos. He turned her being a housewife with no government experience into a distinct advantage – she had no experience in stealing.

In the case of Mrs. Arroyo, she topped the senatorial race in 1995 by selling herself to voters as the look-alike of rags-to-fame actress Nora Aunor. Her resounding victory convinced her husband and mother, former First Lady Evangelina Macapagal, that she was presidential material.

The family turned to Mr. Esposo for help. He agreed, declined to be paid and told Mrs. Arroyo, “I believe you have the best chance of derailing” the actor Estrada.

His intuitive assessment then was: “She can appeal to the same crowd that goes for showbiz types because of the la Aunor thing that made her number one. Compared to Estrada, Gloria had credentials, had better qualifications, and being a woman provided a contrast that could somehow be beneficial.”

But his efforts and image building of her ran aground early on. The three heroes of people power declined to back her. Outgoing president Ramos preferred to endorse his province mate, House Speaker Jose de Venecia.

Catholic Archbishop of Manila Cardinal Jaime Sin made sexist remarks. “What would you do when there is a coup d’etat? Cry? I am not against women but with the problems of the country, like criminality, I think we should give the leadership to a man.”

The most revealing reaction, though, came from another woman – Mrs. Aquino. She declined to back Mrs. Arroyo despite the personal prodding of her brother Congressman Jose “Peping” Cojuangco, Philippine Star columnist Teodoro Benigno and Pastor “Boy” Saycon.

I asked three separate sources why. One quoted Mrs. Aquino as telling the three – “I find her too pragmatic. She will do anything to gain the presidency.”
Another quoted her as saying she’s “too pragmatic for her own good.”

A third, Mr. Esposo, confirmed hearing that was what transpired in the meeting. He also revealed that right before the three met with Mrs. Aquino, he had a private chat with the former president about the political situation, whether an Estrada victory meant a Marcos restoration, and “to feel out what she feels about Gloria.”

Mrs. Aquino’s only comment on the presidential hopeful was – “don’t you find her too pragmatic?”

It was this very trait that caused Esposo to quit the Arroyo campaign. His disillusionment started when Senator Arroyo paid a post-midnight visit to a jailed congressman who was on trial for raping an 11-year-old.

“We were shocked when she paid a visit to Romy Jalosjos. One of your (political) strengths is that you are a woman, Teddy (Benigno) and I were telling her. You are supposed to be very sensitive to women issues.”

One of Mrs. Arroyo’s justifications then was that the lawmaker was not yet convicted. When she became Vice-President and head of the Department of Social Welfare, however, Mrs. Arroyo suddenly became a champion of sexually abused children. She even joined a street protest to pressure Supreme Court to lift a six-month stay of execution on convicted child rapist Leo Echegaray. He was later put to death by lethal injection.

After Mrs. Arroyo won last year’s presidential race, her justice secretary hinted she would grant Jalosjos – who was serving two life terms – a presidential pardon. I can only surmise why Mrs. Arroyo treated both men differently. Was it because Echegaray was dirt poor, while Jalosjos has money and political clout? His clan had carried Mrs. Arroyo to victory in his bailiwick last year.

Her Jalosjos visit, Mr. Esposo claimed, showed that “she seems to have very loose moorings. To her, everything is expedient. That bothered me. These were insights of a character that given pressure and a bigger theater is going to be more pronounced.” The flaw was not gender-based, he added.

I have felt the same misgivings. Before becoming president, she had blamed the old “politics of personality and patronage…(as) a structural part of the problem of poverty” and championed “new politics”.

I thought new politics meant not fielding for office one’s own son, entrenched warlords or a newsreader whose main qualification was popularity. I was wrong.

She has of course her own set of admirers. Cabinet officials swear by her work ethic and her deep concern for the nation’s welfare.

“Margaret Thatcher was for a lot long time very unpopular when she was going through all these programs but ultimately ended up being very popular,” he told me. “By the time she came to the end of her reign, the good things had come through which initially were painful and had aroused deep hostility.”

The second highly successful repackaging that Billy Esposo did had to do with Luis “Chavit” Singson, Billy disclosed to me in one of my lengthy interviews with him. For instance, Billy told the highly controversial governor to always wear white in public as he accused  then Philippine President Joseph Estrada of the most heinous crime, even if Singson himself was a willing participant to the same crime.

I grieve for Billy’s passing but at the same time take comfort in the way he lived – maximally and with an eye to the welfare of his country. I will miss exchanging political gossip and ideas with him.

Before Billy died, Rosalie Mendoza, wife of one of my former Business Day newspaper colleagues died of cancer. I never met her but her husband, University of the Philippines political science professor Amado “Bong” Mendoza, told me about her. 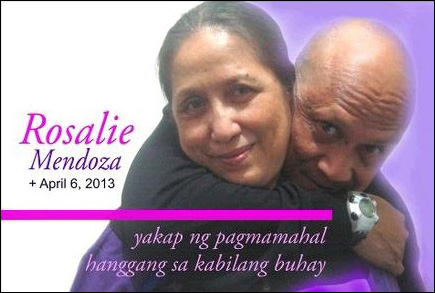 As the months wore on, I tracked her illness through Bong’s postings on Facebook. Bong is one of the survivors of Marcos’ torture cells. Rosalie suffered through his incarceration.

Her body now lies in state at St. Peter’s Memorial Chapels, Quezon Ave. corner Sct. Chuatuco (entrance to Roxas District). But visits will start at 11 am tomorrow April 8, 2013 because Bong wants to be with her alone tonight.

I would also like to condole with the family of the late human rights lawyer Procopio Beltran who was with the Free Legal Assistance Group (FLAG) and Task Force Detainees of the Philippines. 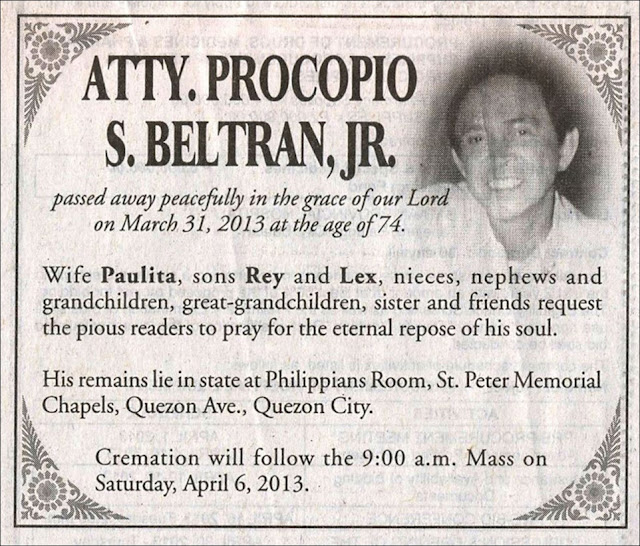 I guess I have a special sympathy for lawyers who devote their time, effort and money helping others whom they know cannot ever repay them with a lot of money.

They’ve left us to carry on.