Because as far as I know, from personal experience, priests are barred from making house calls. 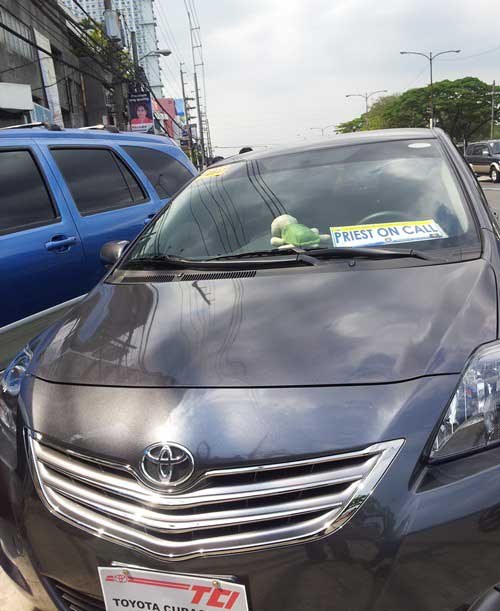 A vehicle claiming to have a priest on call” is double-parked illegally on the street along Katipunan Avenue on Arpil 14, 2013 – PHOTO BY Raissa Robles

Also, they don’t get the same privilege that doctors have, sources from the Metro Manila Development Authority (MMDA) told me today.

Last Sunday, while walking along Katipunan Avenue (the other side of Ateneo de Manila University), I chanced upon this nice, black VIOS 1.3 G car – apparently newly-bought since it had no license plates. It was illegally parked on the street.

It was parked so close to another car (the blue one in the photo) that pedestrians, including me, had no recourse but to walk out on the street and watch out in order not to get run down by passing cars.

What caught my attention was this huge sign on the dashboard. It said: “Priest on call”. The sign had the name and photo of Reverend Father Jose Eliseo Buenviaje. And the sign heavily hinted that whatever courtesy that could be extended to Fr Buenviaje – whose name aptly means “good voyage” – would be appreciated.

To verify if the government had extended special privileges to members of the cloth, I phoned MMDA’s Traffic Discipline Office and Jose Cruz, a traffic officer told me:

I asked him if priests “on call” were allowed to park illegally. Cruz replied: 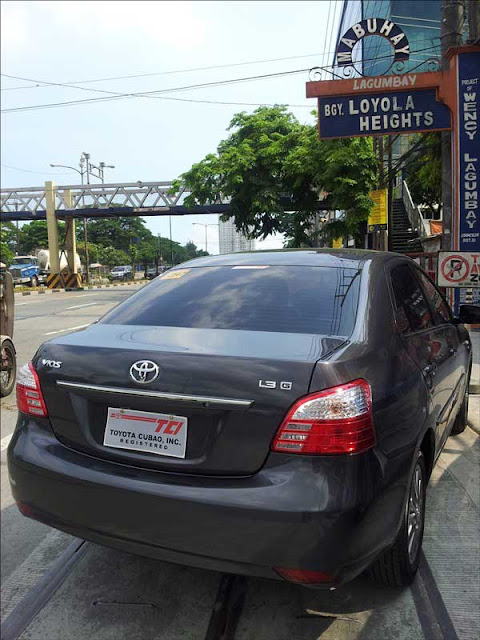 Is that a “no parking” sign just in front of the priest’s car? – PHOTO BY Raissa Robles

I was curious whether MMDA traffic enforcers had ever caught any priest violating traffic laws. Officer Cruz said:

Just an aside, Officer Cruz also told me something interesting about “doctors on call.” He said the MMDA had issued a new ruling on doctors, “kasi ine-exploit ng doctors.”

Vicente Felizardo, who also works under MMDA’s traffic czar, Atty. Yves Gonzalez, also told me that under a new circular, doctors have to get a document from the Philippine Medical Association saying they are “on call” to visit certain patients during a certain period of the day. They are therefore exempt from following the “number coding” for vehicles during that period. But they have to observe traffic laws on any speed limit and parking.

As for the media, their cars are exempt from number coding provided it has the official logo of the media outfit painted on the vehicle. A cardboard sign on the dashboard saying “press” won’t do, Felizardo said.

He also stressed that all “media” vehicles have to observe traffic laws.

And how about “priests on call?” I asked.

And illegal parking, I asked.

He said that the MMDA traffic enforcers have actually caught some nuns violating traffic rules. “But it’s not indicated on the ticket that they are nuns,” he said.

Aside from doctors and the media, those exempted from number coding but not from following other traffic laws are fire trucks, police cars, military vehicles, ambulances and those with government plates, including the presidential car. Hearses are exempt from number coding during a funeral procession.

The only time a private vehicle can violate traffic rules and number coding is when it’s carrying a sick or pregnant patient about to give birth. In this case, Felizardo said, the driver should have his headlights, blinker and signal lights on in broad daylight to indicate the emergency.

Now let’s get back to the “priest on call”.

I phoned the numbers that Father Buenviaje had provided on his “priest on call” sign today. The numbers just kept ringing. So I don’t know what he was doing on a Sunday afternoon in a commercial area outside his vicariate or area of responsibility.

Was he taking tea in one of those popular cafes? Or was he giving extreme unction to someone dying, perhaps?

Then that would be against the official policy of the Catholic Bishops Conference of the Philippines (CBCP).

When my mother was dying and needed extreme unction, I could not get a priest to bless her and give her the last rites. I was told that priests are barred from making house calls. This was meant to give fair and equal treatment to the rich and poor alike, I was told.

At least, that is what one senior bishop also confirmed to me.

But again, such rules are made to be broken. When Bienvenido Tantoco recently turned 92, not one, not two, not three, but FOUR PRIESTS went to his residence to concelebrate a mass for him. Wow. And he wasn’t even dying.

Here’s a portion of the Philippine Daily Inquirer article that talked about it:

Fr. Caluag did say that before he makes travel plans, he takes into account the date and country venue of Ambassador Tantoco’s birthday, for it is the one day in the year that he wouldn’t want to miss.

Perhaps they would explain their presence this way – that Tantoco used to be the ambassador to the Holy See during the Marcos dictatorship.

What has been lost in the Filipino collective memory, including those of the younger priests, is the role the Tantoco family played during and after the Marcos dictatorship.

Bienvenido Tantoco was arrested by authorities in Italy and sentenced to three years in jail for secreting an arms cache in his Roman villa. Italian newspapers claimed it was intended to help unseat President Corazon Aquino. But the elder Tantoco never served his sentence, thanks to the intervention of friends. Reports also claimed he was SICKLY.

Few now remember that the Marcoses stayed in exile in No. 2338 Makiki Heights Drive in Honolulu. The mansion was bought by the Tantocos for US$717,000 in 1977, according to the first Presidential Commission on Good Government chair Jovito Salonga.

Life during the dictatorship was good for the Tantocos. The Tantoco family got hold of the lucrative duty free shop, thanks to a Marcos presidential decree. Rustan’s flower shop regularly supplied Malacañang Palace with the most expensive blooms. Rustan’s supermarket supplied steak to the presidential table.

Gliceria Tantoco was the bluest of the Blue Lady of then First Lady Imelda Marcos. It was she who helped Imelda Marcos secretly buy buildings in Manhattan.

See the New York Times article on the transaction:

AFTER more than three years of turmoil, the real estate empire of Ferdinand Marcos, the ousted Philippine President, and his wife, Imelda, appears to be emerging from a web of international intrigue and competing claims by Federal prosecutors, a foreign government, local developers and an international arms dealer.

The Marcos holdings in Manhattan comprise four buildings, all in need of polishing to correct the neglect that has resulted from their entanglement in a series of
court disputes.

The buildings are well located and, despite the relatively soft office market in New York, could bring a total of $400 million in separate, court-ordered foreclosure sales.

On Aug. 11, Joseph and Ralph Bernstein, the developers who secretly purchased and managed several skyscrapers for the Marcoses in the early 80’s, bought their leasehold on the 70-story office building at 40 Wall Street for $108.6 million at an auction in Federal District Court in Manhattan. The brothers outbid Jack Resnick & Sons, the Mendik Realty Group and an investment team headed by Morris Bailey, setting a record price for a property bought at a foreclosure sale.

To read the rest, please click on this link –

It was for this reason that Pres. Cory Aquino called for, among others, a boycott of Rustan’s to demonstrate public condemnation of the cheating in the 1986 presidential elections. That was the easy part of the boycott. The part where Cory Aquino had men groaning was the boycott on San Miguel beer, controlled by Eduardo Cojuangco.

But let’s go back to discussing priests. During the dictatorship the clergy was an active part of the dissent. Priests and nuns were one with the people. Nowadays, it’s difficult to tell which side they are on in certain issues. And some priests seem to prefer catering to the needs of the rich and the powerful more than to the poor and the middle class.

I’m not generalizing about priests. There are a lot of good and holy ones – those who take their vow of poverty and of service seriously.

Now let me tell you how I was able to find a priest to bless my dying mother.

My sister, who is living in Canada, told me she has a friend who later entered priesthood. She told me she could phone the priest who was then based in California.

And so she arranged it.

What I did was, I contacted the priest through Skype and I placed the laptop beside my mother’s face and he gave her extreme unction via Skype.

It was only later that I learned that the priest was a very busy man. [UPDATE: The priest has asked that his name be removed since he wishes to remain anonymous. I have acceded to his request.]

He was really and truly a “priest on call”.