Understanding the Elections – Part I:

People have asked me to tell them who I’m voting for senator this May. Rather than give you a list, I will explain how I choose the senators I’ll vote for.

I’m sure many of you will be surprised that you yourselves probably go through a similar process except you do it intuitively.

The three questions I’m asking myself are the following. Each question affects the other two questions. I will explain later why:

QUESTION THREE: Who are my personal choices for senator?

I will tackle Question ONE and Question TWO first and later do a separate piece on Question THREE.

This is a most unusual mid-term poll we’re having. Traditionally, the election is a test of the incumbent president’s popularity and mandate with the people.

This time, it is definitely a dry run for Binay’s 2016 presidential bid.

Only Binay has categorically stated that he is running for president in 2016. He has no choice, I guess.

In 2011, Binay made known his desire to become president in 2016. This means, he has had two years to prepare for the 2013 polls. The election this May is but a preparation for the 2016 polls.

Veteran politician and Senate President Juan Ponce Enrile made the same observation. Enrile, Binay’s party mate, said: “2013 is a testing ground on whom the people will support. This is what you call a curtain raiser” for 2016.

Notice that Binay put up a new coalition for the May 2013 elections – UNA – or United Nationalist Alliance. UNA is no longer the political vehicle of Joseph Estrada when he ran for president in May 2010. It is Binay’s vehicle for 2016.

Binay has fielded his daughter Nancy for senator. She not only has NO political experience. She also has NO political presence anywhere in the country. We can therefore presume that she is placing in the magic 12 due to the sheer pull of VP Binay’s name, plus something else. That something else could be the promises that Binay is making to local political candidates who are willing to carry Nancy Binay’s name on their sample ballots.

There is also the fact that Nancy Binay’s surname begins with the letter “B”. Here’s a trick I learned from a veteran political operator, who told me how they are able to subtly influence the results of a political survey. Part of the art is in deciding how to present to survey respondents the “universe” or list of names to choose from – in this case, alphabetically.

Alphabetically, Nancy Binay’s name is number five in the Comelec official list. And the surname Binay is a familiar and popular name.

Normally, a vice-president can pretty much sit out an election of senators and local officials. But this time, VP Binay is busy campaigning like a candidate. He is so busy that he even skipped Estrada’s recent birthday party-turned-political campaign rally. Normally, you don’t do that to your most important political ally.

But Binay felt he needed to be way over in La Union, the northern tip of Luzon, campaigning. He even told a press conference there:

“I didn’t know how to apologize to him (Erap). I just told him Sir, please understand. We have to work.”

You can read about it more here.

The alliance between Estrada and Binay is an opportunistic one. Binay all but stabbed Estrada in the back during the 2010 elections with the “NoyBi” campaign. Still Estrada agreed to Binay’s UNA, where Estrada now seems to be content to play number two. Or it could be just practical, amoral politics at work. No friends, no enemies, no principles: just pure political calculation.

Estrada is fighting for his political legacy. He wants to erase his conviction for plunder by capping his life with a victory – first as president. And when that did not pan out, then as mayor of the nation’s capital. He needs all the help he can get fighting Manila Mayor Alfredo Lim. Especially Binay’s help.

So, just to recap, here are the votes that the four politicians got in Manila:

Still, between the two geriatrics fighting over a decaying city like Manila, it is difficult to tell who will win city hall – Dirty Harry or the Guy convicted of Dirty Money.

I was told by a voter in Cubao, Quezon City that UNA is aggressively campaigning there for people to vote “straight UNA” this May.

Of these nine candidates, only TWO are very likely to make it, as of the latest SWS survey:

FOUR OTHERS are fighting tooth and nail to make it, based on the same SWS late April survey:

It is for this reason that JV Ejercito said early this month that six UNA candidates will win. Because only six are within fighting distance. And of the six, only two are sure to make it. If you want to read the story quoting Ejercito, click on this link.

At the moment, members of the UNA coalition led by Juan Ponce Enrile, Jinggoy Estrada, and Vicente Sotto control the Senate leadership .

Come July 1, the same THREE UNA members will be left at the Senate as holdovers. Let’s call them the Enrile-Binay bloc: 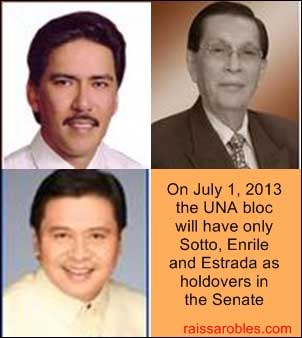 TWO other senators will likely ally with the Enrile-Binay bloc:

Incidentally, the Lakas Kampi Party of detained former President Gloria Macapagal-Arroyo has announced it would back several UNA candidates. 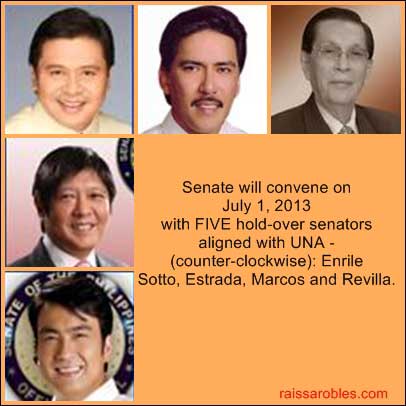 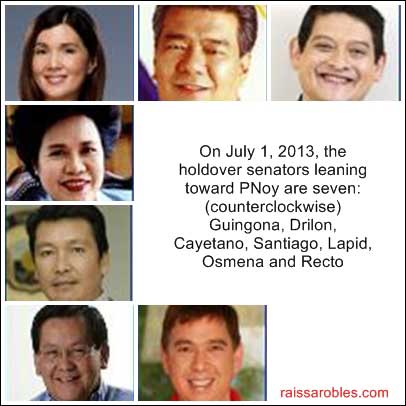 This means, that in order to keep the Senate leadership in the UNA bloc (and this would require 13 votes), UNA has to win at least EIGHT SENATE SEATS this May. At this time, this seems impossible since UNA can win only SIX SEATS at most although it fielded NINE candidates.

If UNA wins six seats, it will occupy ELEVEN SEATS in the Senate.

That’s still a lot. But can that realistically happen?

Because from the PNoy bloc, NINE of TWELVE senatorial candidates are likely to win this May, the latest April SWS survey indicates: 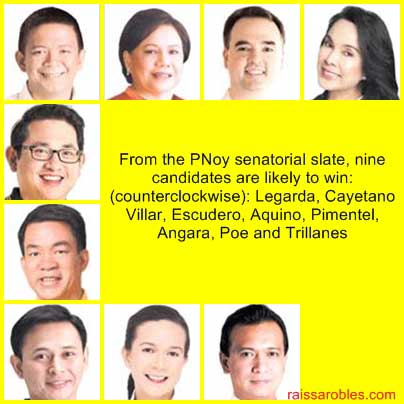 This means, the PNoy bloc will control at least 16 seats in the Senate (if you add the SEVEN holdovers).

They will be fighting over the last THREE SLOTS in the Magic 12 against THREE UNA senatorial candidates:

And so, to conclude –

Those who want Binay to be President in 2016 should vote for Jack Enrile, Gringo Honasan and Migz Zubiri.

Those who don’t want Binay to be President in 2016 should vote for Jun Magsaysay, Jamby Madrigal and Risa Hontiveros. 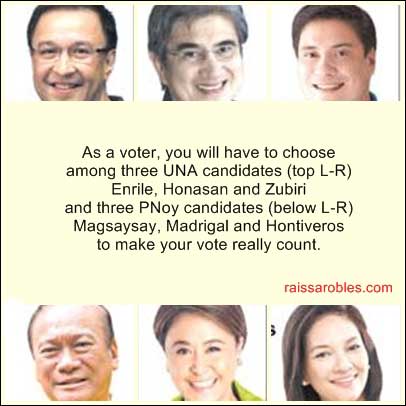 ONE – There are only 26 winning politicians who can rightfully claim to have the backing of a national constituency. These are: the President, the Vice-President and 24 senators.

TWO – The Senate performs a special function in Philippine democracy. It checks the actions of the Chief Executive and the latter’s officials. It can cut the budget of the Executive branch. Each senator has a bigger pork barrel than one congressman. The Senate is also the training ground for future presidents.

THREE – The Senate President chairs the powerful Commission on Appointments which can sit on presidential appointments forever and ever.

Members of the Commission on Appointments, who come from the House and the Senate, can also block presidential appointments indefinitely. A case in point is that of the non-confirmation of Commission on Audit Commissioner Heidi Mendoza.

Mendoza happens to be a witness in the ongoing Sandiganbayan graft case of former Makati Mayor Elenita Binay, the VP’s wife, over a P72 million purchase of Makati city hall.

FOUR – In the hands of a bloc whose policies and ambitions are opposed to the sitting President, the Senate can derail the President’s plans and programs. This is in order to turn the president into a lameduck so that his endorsement in the next presidential election will not mean much.

Can the Senate become a rubber stamp of the President if nearly all come from his bloc?

This is the argument that candidate Honasan is now making in order for the electorate to re-elect him. Honasan recently urged voters to maintain a balance between the number of administration and opposition members in the Senate because he said an imbalance would damage democracy and “an independent Senate will serve public interest best.”

A Senate controlled by the President’s bloc rarely happens.

But there’s nothing to worry about, Honasan. When that happened in 1987 – when only two opposition senatorial candidates (Enrile and Estrada) were elected into office then – the Senate still opposed the President on key issues. For instance, the Senate rejected the extension of the United States bases. It continuously grilled finance officials on how best to reduce the foreign debt and it refused to confirm some of the Chief Executive’s cabinet appointees (e.g. Miriam Santiago, Augusto “Bobbit” Sanchez and Jose Concepcion Jr.).

This is because many senators want to project themselves as “independent” of the Chief Executive. Most of them are keenly aware they are presidential material. Most of them are intensely and continuously jockeying to run for VP or the presidency. Which is perhaps why you have a section in the Constitution that allows sitting senators to run for President or VP without losing their Senate seats if they don’t win.

With 24 egos altogether in one hall, the rivalry inside the Senate is often near boiling point.

Will a Senate controlled by the PNoy bloc or the Binay bloc come up with good laws?

Not all the time. Remember that the Anti-Cybercrime Law and the amendments to the Intellectual Property Code were approved by both PNoy’s party mates and Binay’s party allies.

But you can be sure that if the Binay bloc obtains control of the Senate, they will move to repeal the Reproductive Health Law and to amend the 1987 Constitution.

Either way, ordinary citizens will still have to guard both the House and the Senate closely in the passage of laws.

What if you find some candidates in the magic 12 just too “kadiri” for words?

That is where your personal choices comes in.

I think political dynasties are what keep us poor as a nation and a people. But more on that later.

In addition, I am leery of candidates who do not file their Statements of Assets, Liabilities and Net Worth (SALNs) according to the Constitution and the law.

But as I said, my personal choices (QUESTION THREE) will be affected by the first two questions –

And so, on the eve of elections I will review my final choices based on the three questions.

NOTE: I will soon be posting a piece on QUESTION THREE, which will contain my assessment of candidates who might make it to the Magic 12.