Some commenters have asked me why I’m posting only now an article on Senator Loren Legarda’s two SALNs. It’s because my blog is not my main work. South China Morning Post is my main work.

This article, published yesterday on Sunday Morning Post magazine,  sheds light on how the dictator Ferdinand Marcos actually signed two secret orders on the eve of Martial Law; and how the Presidential Commission on Good Government stumbled on another secret Marcos account long after the dictator’s death.

I’d like to thank Eldes Tran, Online news producer @SCMP_News for posting the link to my article online on Twitter:

Chance finds have shed light on the vast fortunes stashed away by the Marcos regime. But with members of the former first family of the Philippines in positions of power, returning the wealth to the people remains a challenge, writes Raissa Robles 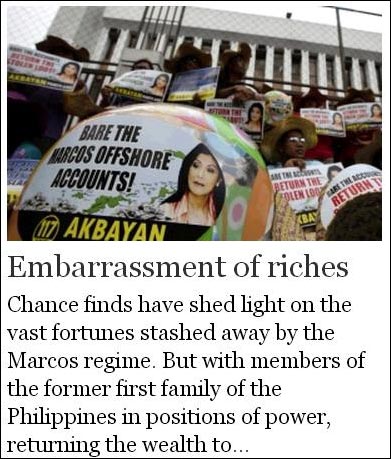 In a nondescript building along Manila’s traffic-choked Edsa (Epifanio de los Santos Avenue) highway, the hunt continues for a toppled dictator’s ill-gotten wealth. In this edifice – now occupied by the Presidential Commission on Good Government (PCGG) – Maria Imelda, or Imee, the eldest daughter of Imelda and Ferdinand Marcos, once had an office. Inadvertently, she left behind a very interesting notebook.

The book contained lists of vast secret holdings belonging to Imee’s father and held by dummy nominees in various corporations. Other incriminating documents were left behind in Malacanang Palace when Ferdinand Marcos was driven out of the country in 1986 by a peaceful “people power” uprising, staged along the same highway.

Those documents led investigators to, among other discoveries, secret Swiss bank deposits totalling US$356 million and four buildings in Manhattan, New York.