Three weeks ago, Senator Loren Legarda quietly rented out her New York condo, turning her into a landlady on posh Park Avenue, according to the New York real estate website Blocksy.com.

The monthly earning from the rental lease is much more than the monthly basic pay of a Philippine senator.

There is nothing wrong with investing in real estate abroad.

However, it appears to be a contradiction in the case of Senator Loren Legarda. When she chaired the Senate Economic Affairs Committee she called on foreigners to invest long term in the Philippines while secretly, she had opted to invest a big chunk of her personal assets abroad.

“We need foreign investor who would stick with us through thick and thin, and who will not leave in huff at the slightest sign of trouble,” said Legarda, chair of the Senate Economic Affair Committee.

Legarda said that the country has abundant skilled workers to entice foreign companies to set up their industrial or business operations here.

Legarda issued the statement in reaction to reports that so-called hot money are flowing back to the local stock market as a result of the plummeting prices of oil in the world market.

The latest Bangko Sentral report showed that the country drew $187.5 million in net foreign investments in August, compared to the $20.2 million investment inflow in July.

“The problem with hot money is that it comes in today and is gone tomorrow,” she said, citing as example the large investment outflow last March triggered by inflation.

Legarda said that any investment coming into the country is good, but that what the country needs are long-term investments, as exemplified by business processing firms, and technology-based companies.

What Legarda forgot to say, perhaps, is that top dollar individuals like her can help the country grow and become less poor by investing their money in the Philippines.

Legarda’s original press release can be found on the Senate website by clicking here.

Legarda is a front-runner in the current senatorial race. Sources told me that she had earlier instructed her staff to make her Number One. Being Number One opens up a world of possibilities for the broadcaster-turned-senator. Which is why it is very important for the public to scrutinize her actions from now until the 2016 race for the presidency and vice-presidency.

Two commenters – one from San Francisco and the other from Canada – tipped me off about this new development involving Legarda’s piece of Manhattan.

Senator Legarda listed her 725-square foot condo unit as for rent (it was listed on “Blocksy” by real estate agent Prudential Douglas Elliman)  on December 1, 2012. She finally got a renter on April 23, 2013 after dropping the monthly payment from US$ 3,100 to US$ 3,095. So it’s no longer available on the market in case you want to rent it out yourself. 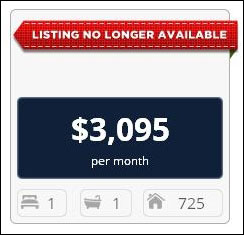 However, thanks to the listing on Blocksy, we can now get a glimpse of Senator Legarda’s elegant apartment.

Pre-War Park Ave 1 bedroom for Rent Furnished or Unfurnished in a Full Service Luxury Condo. Large and Sunny, West facing 1 bedroom with views of Park Avenue and the Empire State Building from every room. Pre-war charm such as Wood-Burning Fireplace, original Hardwood Oak floors and Lofty 9 Beamed Ceilings add to this apartments appeal. Modern Open Kitchen with slate breakfast bar and tons of counter space are sure to delight. Note: A New dishwasher will be installed prior to move in. The Bathroom was just Renovated and features an Oversized Window with Park Ave views and crisp white Subway tiles. The Massive Bedroom is an amazing 20×13 with 3 large closets, additional shelving, 2 large windows and enough room for a home office. Rent, $3,095 Unfurnished or now only $3,300 Furnished*. Owner prefers NO smokers, and NO pets. 77 Park (The Griffon) offers proximity to Grand Central Station, Bryant Park, The Morgan Library, the Theatre District, as well as to the burgeoning restaurant scene of nearby Park Avenue South.. This landmark building is a former hotel with elegant sitting area on both sides of the concierge. Building has a 24 HR Concierge/Doorman, Central Laundy, a Roofdeck, Live in Super and Parking is across the street. Apartment Features : Skyline Full, West, Wood Burning, Prewar Detail, Beamed Ceiling, Hardwood Floors, Excellent Light, Oversized Windows, Modern Kitchen, Renovated Bathroom, Great Closet Space, Dishwasher

Below are more details on Senator Loren Legarda’s rental apartment in The Griffon building, found in Blocksy: 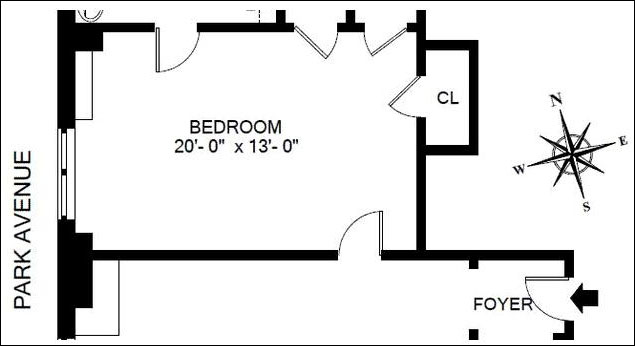 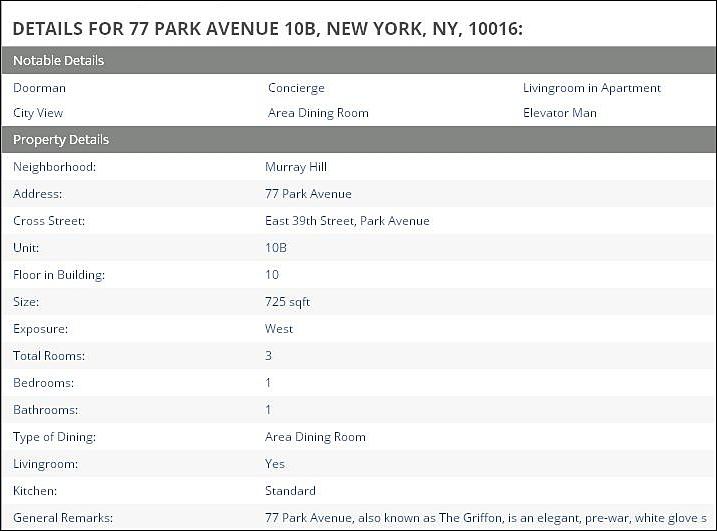 The SALA-DINING ROOM with FIREPLACE:

View from the SALA-DINING ROOM with a FIREPLACE:

The FOYER outside her apartment:

A Panoramic view of The Griffon (2nd building from the right) and Park Avenue: 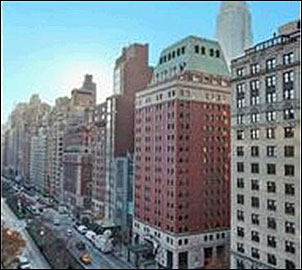 The view from outside The Griffon: 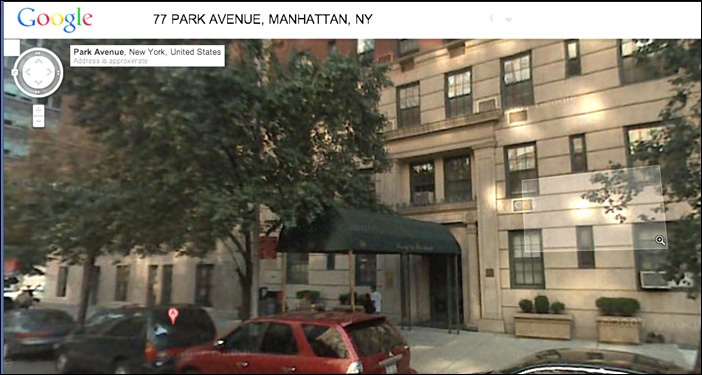 The original rental ad for Senator Loren Legarda’s property can still be found here in Blocksy.

I asked an official at the International Tax Affairs Division of the Bureau of Internal Revenue whether the senator would have to pay Philippine taxes on her Park Avenue rental income.

This is what the official, who spoke not for attribution, told me:

“With the exception of overseas Filipino workers, as a general rule a citizen of the Philippines is taxed for income within and without the Philippines.”

“For the rent she’s earning (from her New York property), she (Legarda) has to pay the corresponding income taxes using our table (of tax due).”

The official explained that Legarda would become a “mixed income earner” and would need to consolidate all earnings received for the year.

However, “we have a tax treaty with the US. The taxpayer can opt to have the taxes paid in the US (for the rental income) creditd as income tax received and deducted from the total income tax due,” the official explained.

When I explained that Senator Legarda was merely claiming one-fourth ownership of the rental property, the official said the senator would then be entitled to deduct from her Philippine income tax only 25% of the taxes actually paid in New York as a result of the rental income.

No reply from Legarda’s staff

I phoned staffmembers of Senator Legarda to verify the rental of her NY condo and to ask again for a copy of her 2011 SALN.  One of them said she did not know anything about the rental but would get back to me about it and my SALN request.  I’m still waiting for her reply.

Then I received this noon the following press release from Senator Legarda’s office. Could this be the reply I was waiting for?

Reelectionist Senator Loren Legarda remained on top of the people’s choice for senator in the 2013 elections as revealed in the SWS’ final pre-election survey conducted on May 2-3, 2013 with 2,400 respondents.

Legarda said she is ever grateful that despite the black propaganda hurled against her, she remains number one in surveys and in the hearts of the people.

“Salamat sa Diyos at salamat sa lahat ng tao na patuloy ang tiwala at suporta sa akin. The result of this latest survey gives me renewed strength and inspiration. This goes to show that Filipinos will not be swayed by the dirty tactics deployed by some to tarnish the good name and track record I have worked hard on,” she stressed.

“I hope that on Election Day the Filipino electorate will look into our track record, what we have done and what we plan to do,” she added.

Among Legarda’s priorities in her next term in the Senate is the Universal Healthcare Coverage Act, which will ensure free healthcare services for the twenty-five million Filipinos through Philhealth.

She will also expand college scholarship through the Pantawid Tuition Program, which seeks to fund one college scholar for every poor family, particularly those belonging to the 3.8 million poorest households.

Legarda continues to work with different sectors in solving key issues such as poverty, malnutrition and unemployment, through L.O.R.E.N. sa Bawat Barangay, which is short for Livelihood Opportunities to Raise Employment Nationwide.

The program aims to inform citizens about livelihood and employment opportunities available to them and to involve various sectors and local government agencies in the creation of jobs and businesses.***

You know, I’m still curious to know why she felt the need to hide the fact that she “co-owned” a New York pad in her Statement of Assets, Liabilities and Net Worth. Anyone reading her SALNs from 2007 to 2011 (at least her original SALN for 2011) would never know that the property she allegedly “co-owns” is in New York.

However, Putin dropped a section that would have banned as well ownership of real properties abroad. And because of that, both Houses of the Russian Parliament enacted the measure.

Would the new Congress – to be elected this Monday – be bolder than Putin and the Russian Parliament?

Would Senator Loren Legarda and other senators who own properties abroad give theirs up, in the same way that President Benigno Aquino gave up his beloved Porsche?