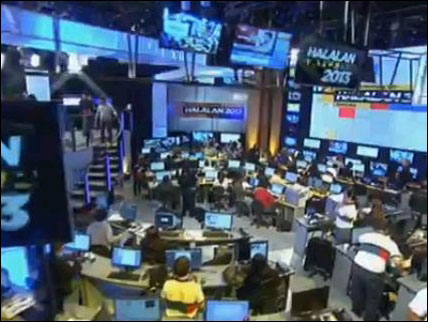 That’s how my 15 minutes as an election analyst started.

After thousands of hours conducting interviews in all sorts of places – including the garage of one politician who didn’t want me stepping inside his house – it was my turn to be interviewed. In a cavernous television studio. On live cam. In Tagalog.

I’m used to conducting interviews at my own pace.

So when someone in ABS-CBN Channel 2 phoned and asked me if I could be interviewed on election night for their Halalan live coverage, I took some time to say yes. First of all, it was going to be in Tagalog: not that I don’t know my own language. but I’ve found out that when I absorb information in English, it seems to stay in that speech in my brain. Extracting it and converting it to Tagalog requires digging a new neural pathway.

Second, I didn’t know what questions would be asked. Which I suppose is karma. Those I interview never know what I intend to ask them. :)

Anyway late on election night I was inside one of ABS-CBN’s make-up rooms — a very informal place with lots of pictures of celebrities taped along the wall. The make-up artist took one look at my hair and said I dried it wrongly. I suggested that perhaps she could wet it again and start over.

Ces Drilon popped in. She did her own make-up. We chatted a while. It was my first time to see her outside a coverage. Then who would walk in but the new Philippine National Police Director-General Alan Purisima. Ces introduced me to him. If he had not been in uniform I would not have figured him to be the police chief because he had a very cheerful smile.

I’m sorry, but the reporter’s instinct in me made me follow where he was going – to a separate dressing room. I asked him about the police standoff around Senator Bong Revilla’s house while a makeup artist applied a bit of powder on his face and he waited for his turn on camera. He said the armed men were not regular NBI men but confidential agents who had no authority to carry firearms during the elections.

While I was talking with the national police chief, I recalled how my male colleagues in the foreign press would brag about following their sources to the men’s room. I always thought that an unfair advantage over female reporters. Now I’d like my male colleagues to top this.

I was given my own dressing room to wait for my turn on cam. But there was no monitor I could watch to follow the news, and I felt ironically isolated, cut off from developments in a room within one of the country’s largest information companies — this while the rest of the country was glued to TV screens waiting for election results.

So I went out and looked for a TV set. It turned out that the only one in that area following Channel 2 was in the makeup room.

I’m glad I went back to the makeup room because I finally met Ana Maria Tabunda of Pulse Asia there. If I had known she is a doctor and a former dean of statistics at the University of the Philippines I would have been less informal with her. Happily, I didn’t know. And so we spent the time chatting about elections.

I am in awe of statisticians. They see stories in numbers that I don’t see. They have figures crammed in their brains that they can correlate.

She also showed me the latest Pulse Asia survey done almost on the eve of the senatorial candidates and explained to me how to interpret it. For instance, she said, based on this survey, the highest that frontrunner Grace Poe could go was number 2 and the lowest she could drop was number 7. 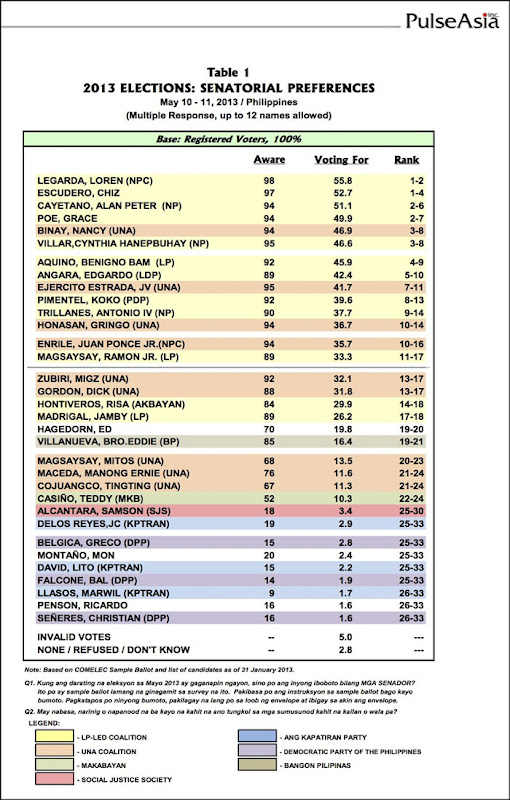 Both Pulse Asia and Social Weather Stations clearly did not anticipate Poe’s meteoric rise to the number one position. Respondents in the last SWS survey conducted May 2 & 3 had placed Poe at number five.

No matter how I pressed her, Dr Tabunda declined to talk about any of Pulse Asia’s clients. Because I kidded her that there was something they kept from the public – and that is, the geographical areas where the various senatorial candidates were weak or strong. She told me that information was for their paying subscribers. That was the bread and butter of their company.

Dr Tabunda was called to do her interview with the news team. After about 15 minutes, close to midnight, it was my turn. The studio set was HUGE, and struck me as looking like a control center for a moon launch. People watching the show on TV would get the impression the studio was quite empty. In reality, there were a lot of production people.

One wall had a huge screen where the feeds from various field reporters were flashed. If you happened to see me in my segment craning my neck, it was because I was straining to read the election results on the giant display.

I noticed that the TV anchors worked well smoothly and together. The pace was fast.

Also, I finally got to feel what it’s like to be on the receiving end of a series of questions. Thankfully I didn’t stammer, though my mouth suddenly became so dry, I had to actually will myself to form the words to speak.

Karen Davila, whom I met for the first time ever, did most of the grilling. [Some time during the evening, I also met Julius Babao. He is much thinner and tall in person. I also ran into Tony Velasquez who I had seen several times in Malacañang Palace where he used to cover.]

My hubby Alan told me later that Karen introduced me by calling me “matapang”. I never noticed that because I was trying to balance on my precarious stool.

You can find the complete interview — my 15 minutes as an election analyst — here:

Pls. click on this link here and then look for segment 7 (or the seventh video on the list below the screen entitled “tonight’s newscast”).  I’m wearing a beige jacket. My turn starts at seven minutes, four seconds.