The Commission on Elections has just proclaimed the 12 winning senators in a most unusual way – without ranking them and without giving the number of votes each won.

It’s a first in Senate electoral history. And one intended, it seems, to stop the cheating.

Panganiban, in his opinion column Saturday at the Philippine Daily Inquirer said:

“No one was chasing the Comelec, why the indecent haste? Why rush to proclaim without legal or factual basis? Why not wait for two days, just two days, and then proclaim all 12 legally and unquestionably?”

My guess – based on my experience covering nine national and local elections starting 1986 – is that the Comelec was trying to head off cheating that would materially affect results of the 2013 senatorial elections. Especially the rankings and the winners for the 10th, 11th and 12th slots.

Politicians have told me often enough that it’s very difficult to cheat in the local elections because the guarding of votes there is mano-a-mano:Watchers of rival camps are present in all the precincts watching every move the Comelec personnel and the rival camp make.

The problem has always been guarding the integrity of the results for national positions:

And ironically enough, the partylist race because the votes here are cast nationwide.

Namfrel (The National Movement for Free Elections) came out with a very good diagram of the process and I am reposting it below.

Altogether, Comelec scattered throughout the country 78,166 PCOS machines. Each schoolroom with a PCOS machine is what Comelec calls a “Clustered Precinct”.

All in all, there were:

1,640 cities and towns mostly located in

80 provinces (because some cities like those comprising Metro Manila) are not part of any province.

After the voting was over on May 13, 2013, each of the 78,166 Clustered Precincts printed an Election Return (ER). The ER totaled the votes for each of the candidates.

A Citizens Arm (in this case the PPCRV)

And the UNA Headquarters

All these fast transmissions, however, are not the “official results”.

Our Election Code only recognizes as “official results” those results that undergo the following four-step process:

First, the PCOS machine has to produce an ER.

Second, the ER has to pass through and be approved by the city or municipal board of canvass.

Third, the city or municipal board of canvass then verifies and adds up the total number of votes. The board then produces a “Certificate of Canvass”

Fourth, this “Certificate of Canvass” is then transmitted electronically to the Provincial Board of Canvassers.

There are 80 Provincial Board of Canvassers in all. Each one in turn prepares a Certificate of Canvass.

In addition, 26 Chartered and Highly Urbanized Cities also prepare their own Certificates of Canvass

In addition, ONE Certificate of Canvass is prepared to summarize the local absentee votes for senatorial and party list elections

In addition, 197 separate CoCs are prepared to summarize the Overseas Absentee Votes from 197 separate countries.

For senators to be proclaimed winners, the National Board of Canvassers located in Comelec’s main Manila office has to receive the 304 CoCs – from the provinces, from highly urbanized cities and from absentee voting locally and overseas.

In elections where votes are gathered nationwide, this is the rule that has always been followed: ALL election returns from a particular town or city in a province have to be all accounted for – 100% – before a Certificate of Canvass from that province can be produced and then sent on to the national board of canvassers in Manila.

Here is Namfrel’s illustration of the poll automation process: 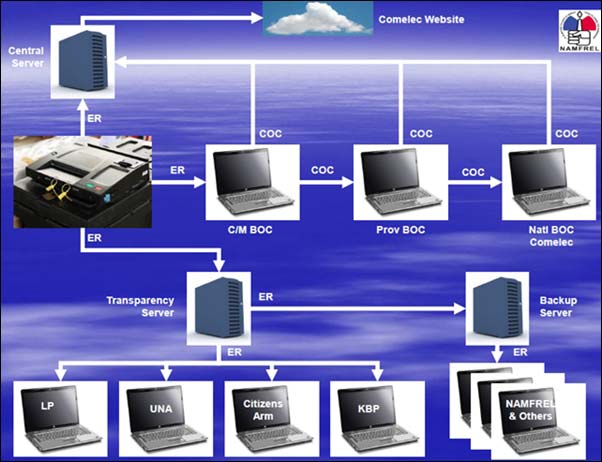 This is not what happened in the May 2013 elections. Comelec did not wait for the national board of canvassers to complete most of its job. Instead, the Comelec commissioners relied on what they called “group canvass reports” which is nowhere to be found in our Poll Automation Law.

However, here is the interesting thing about Republic Act 9369 or the Poll Automation Law.

It does not require Comelec to give the proclaimed senators any ranking or to disclose the number of votes each one got.

Why did Comelec proclaim senators piecemeal?

Because, as we all saw, there were security breaches in the poll automation process.

As Namfrel noted: Within 48 hours the the process had slowed down, with 23,039 ERs still waiting to be transmitted. That translated to 29.47% of ALL ERs not transmitted.

What had happened to these ERs?

Namfrel listed the major breaches in the poll automation process: 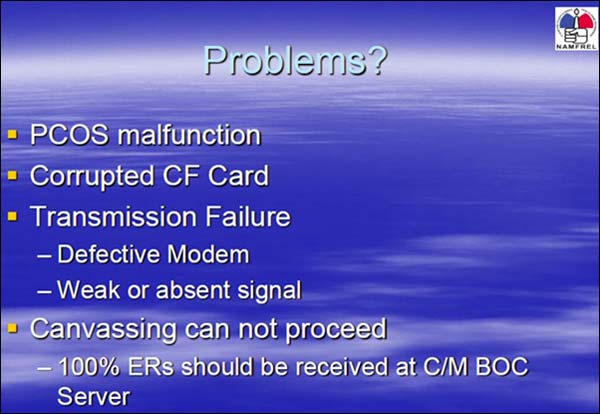 A highly reliable source, quite familiar with the election process, told me that one way of cheating in an automation process seems to be to corrupt the CF Card so that a fresh CF Card would have to be placed. “Theoretically, with a new CF card, you could feed new ballots into the PCOS,” the source said.

Another way is to infiltrate the process – for instance, in the delivery of the ballots or by planting technical personnel.

Still another is to delay the process – “no one transmits” the ERs – as what happened in certain places, my source pointed out.

Poll automation has opened up new and old ways of cheating, especially for national positions.

As my hubby Alan pointed out, Filipinos are very good in finding holes in secure systems.

Can Comelec commissioners be punished for what they did?

Sure they can, but only through impeachment.

Would Congress – especially the 12 newly-proclaimed senators – take part in such an impeachment? By doing so, they would call their very election into question.

What needs to be done is to follow the random manual audit closely and to amend the poll automation law in order to speed up and secure the process further.

I also believe it is high time we develop our own poll automation system down to the source code. We can test it in the coming barangay elections. I don’t see why we can’t do it in time for 2016.  Smartmatic is just too problematic.