Even before the Taiwan government had received the official letter containing the Philippine apology for the death of the Taiwanese fisherman, Taipei already knew its contents, highly knowledgeable sources said.

In fact, the Taiwan government already knew the contents of three previous drafts of the letter.

This was because top officials of the Manila Economic and Cultural Office (MECO) — our “ambassadors” to Taiwan (we’re not allowed to have embassies and ambassadors because of our One China Policy) — were handing to the Taiwan foreign ministry all four drafts of what the official letter was to contain.

On top of that, Manila’s quasi-envoys to Taiwan – MECO chairman and CEO Amadeo Perez Junior and MECO Taiwan managing director and resident representative Antonio Basilio – were taking Taiwan’s side and trying to convince the Philippine government to support Taiwan’s four demands following the fisherman’s death. These demands were contained in Version 1 of the letter of apology, sources also indicated.

My sources tell me that the MECO officials, who have since been recalled to Manila, are probably going to get fired.

MECO is a plum post. A source connected to a former MECO top official told me that for MECO envoys “there is no accounting of funds”. The officials – who are often not professional diplomats – are only accountable to the Philippine president since MECO is not under the Department of Foreign Affairs. (The current MECO officials are under the Office of the Executive Secretary.) At present, “It is a political reward. It pays very well, if you’re talking of a salary, a car and driver, and a house in a really nice exclusive place in Taipei,” my source said.

The source also said MECO generates revenues in the form of visa fees and it is completely discretionary on the part of the MECO heads to decide how much of these visa fees to turn over to the Philippine government.

Being the head of MECO, “you can do a lot of favors for people, especially those who want to make business back and forth,” the source added.

I stumbled on this latest twist in the Taiwan dispute after @Martial Bonifacio, a commenter on Cyber Plaza Miranda – the growing number of cyber-citizens who congregate on my site – placed a link in one of his comments.

The link led to a downloadable PDF. It contained the four versions of the Philippine apology, all dated May 14, all on MECO letterhead. Three of them were signed by MECO Taipei resident representative Antonio Basilio and printed with the MECO letterhead.

Knowing what was in all four versions gave Taiwan a huge diplomatic and negotiating edge. Also, apparently, it contributed to the Taipei government’s fury. It thought it was going to receive the servile and docile draft no. 3, and instead got draft no. 4 — the version which Manila (not our ambassadors) wrote. The fourth letter version deviated markedly from Taiwan’s initial four demands, which were reflected in Version 1 which was unsigned and was not on MECO letterhead.

It led to Taipei branding the Philippine government “dishonest” and “capricious” and imposing eight sanctions against Manila.

I tried phoning Mr. Basilio yesterday for the South China Morning Post story I was working on. He was in the MECO office in Makati but I was told he was “tied up on the phone” or was “busy.” So I left the following questions for him to answer:

1. There were four different versions of the letter which reached MOFA (Taiwan’s Ministry of Foreign Affairs) on the same day. Which version was cleared by Malacañang?

2. Why were there four versions?

3. Were the other versions only drafts?

Later in the day (May 21) someone in the MECO office e-mailed me Mr Basilio’s replies.

“Releasing these earlier versions is a breach of protocol and courtesy.”

He apparently meant the Taipei foreign ministry should not have made all the drafts public. 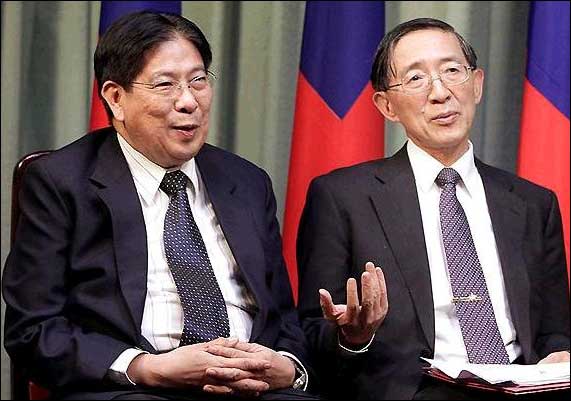 He confirmed that the four versions were really drafts. Here’s his explanation why the Taiwan foreign ministry under David Lin had all four versions:

“It does not matter how many versions came out of the meeting on May 14. They are drafts that reflect a sincere effort by me and the Foreign Minister to reach agreement under severe time constraints and the need to secure clearance from our superiors. What matters is the final version that was accepted. That final version responds to the Taiwanese demand for : 1) President’s apology to the family and the people of Taiwan for the loss of life; 2) start of the investigation (which is about to be completed); 3) convening of relevant agencies in the Philippines to consider ways to prevent similar incidents from occurring in the future. Financial assistance was also offered to the family of Mr. Hong. These actions were conveyed to the Taiwanese public via a press conference that followed.”

Mr. Basilio mentioned a meeting that took place on May 14 which resulted in the drafts. He justified the drafts as reflecting  “a sincere effort by me and the Foreign Minister to reach agreement under severe time constraints and the need to secure clearance from our superiors.”

I was stunned. For whom was Mr. Basilio negotiating, I wondered.

The  political affairs officer of the Taiwan Economic and Cultural Office (TECO) shed more light on what had happened during the May 14 meeting. David Chien of TECO held a briefing for Manila reporters last Monday. According to the Philippine Daily Inquirer report of the briefing:

He (Chien) said that on May 14, MECO and TECO reached an agreement on measures to take to avoid an escalation of tensions.

“The agreement included a formal letter expressing the Philippines’ response to the Taiwan government’s requests, to be delivered by Basilio to the Ministry of Foreign Affairs (Mofa),” Chien said.

“However, when Mr. Basilio arrived in Taiwan on the evening of May 14, he presented a letter to Mofa that was completely different from the one initially agreed upon by MECO and TECO,” he said.

“The Philippines’ Department of Foreign Affairs and other government agencies apparently have insisted on certain wordings for the letter,” he said.

“The final version of the letter was still very different from the first letter agreed upon in the afternoon of May 14,” he said.

“Taiwan felt that this inconsistency shows the insincerity of the Philippine government in meeting the Taiwan government’s demands,” he added.

The Manila Times had a very interesting take on the same briefing in the story entitled “PH official bungles talks with Taiwan”.

The story quotes David Chien as saying that a “secret phone call” from an unnamed Philippine government official “blew up everything” that had already been agreed upon between MECO and TECO officials.

Chien told reporters that the first and third versions of the letter of apology were acceptable to Taiwan. But the fourth version was “unacceptable and beyond imagination”.

I have not been able to find out the identity of this government official whose phone call resulted in scuttling everything. The Manila Times head for the story blames this official for bungling talks with Taiwan.

But did he, really?

Were the talks between MECO officials and the Taiwanese foreign ministry approved in the first place? Or did MECO officials go out on a limb; ascertained the demands of Taiwan; and then pressed the Philippine government to accede to them?

I obtained the answers from putting together the following pieces of information.

Deputy presidential spokesperson Abigail Valte held a press conference on the same day that Chien of TECO did. Valte told reporters it was only the fourth letter that the Philippine government had authorized. Valte said:

“The last letter that was transmitted to them was authorized by the President and I understand the contents of the letter were very precise and that it was emphasized there, it was made very clear that the President had already tasked the National Bureau of Investigation, which, in our view, has already proven their impartiality and their objectivity in investigations that they have been tasked by the President to undertake.”

In other words, it was the fourth letter that reflected the Philippine position. The rest did not.

Who then authorized MECO officials to write the first version of the apology letter which closely reflected Taiwan’s demands? (I am posting at the bottom the four versions of the letter and the Taiwan foreign ministry’s comparison of the four letters. You can download these from MOFA’s website.

And so I asked various government sources around.

A senior diplomat who agreed to talk provided he was not named told me that negotiations can and do take place informally before such letters are sent. However, the drafts are never released, never signed and never printed on official stationery.

One of the sources told me that Version 1 of the letter “was not the agreed response.”

Because of this, the two MECO officials are going to lose their jobs, although “they may not know it yet,” source added.

I wanted to know exactly why Mr Perez and Mr Basilio would lose their posts. This is the answer I got:

“The first rule of proper relations is that officials can be relied on to uphold their principals’ position and not (by) going rogue.”

While I was gathering data for my piece on Taiwan yesterday, I chanced upon an interview of Mr. Perez over radio station DZMM. He was asked whether the shooting incident had happened in Philippine territorial waters – as what Malacanang Palace and the Philippine Coast Guard have repeatedly said.

Mr Perez’ reply on radio did not follow the official line. All he said was: “Let’s wait for the investigation.”

Below are the four versions of the letter and the Taiwan foreign ministry’s comparison of them: 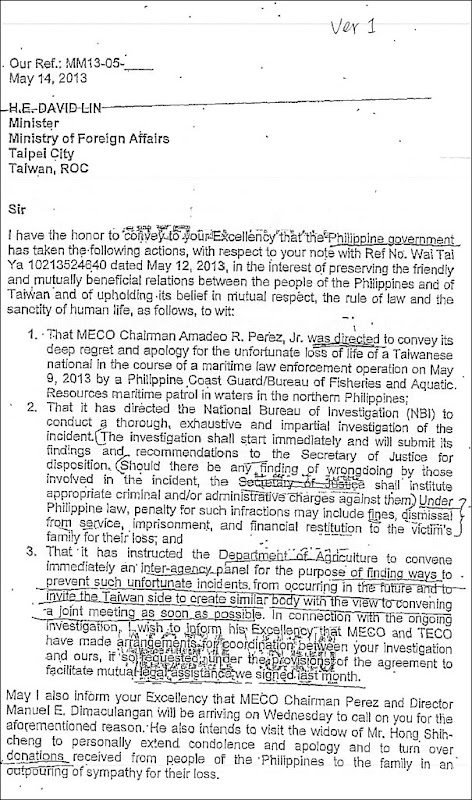 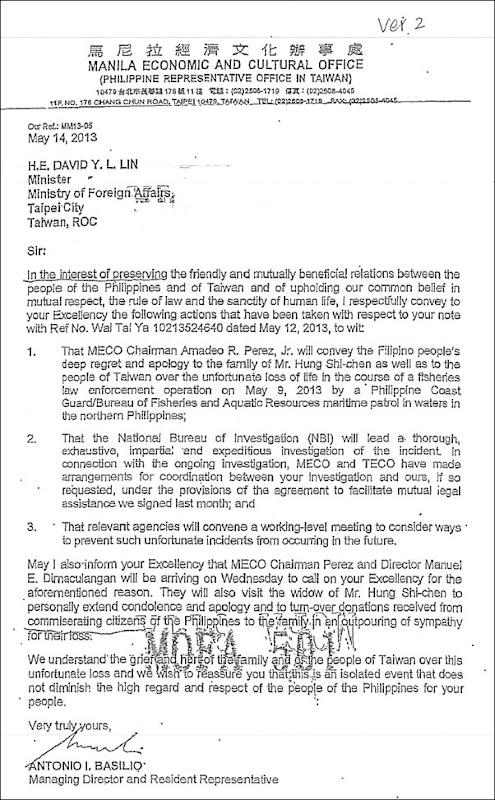 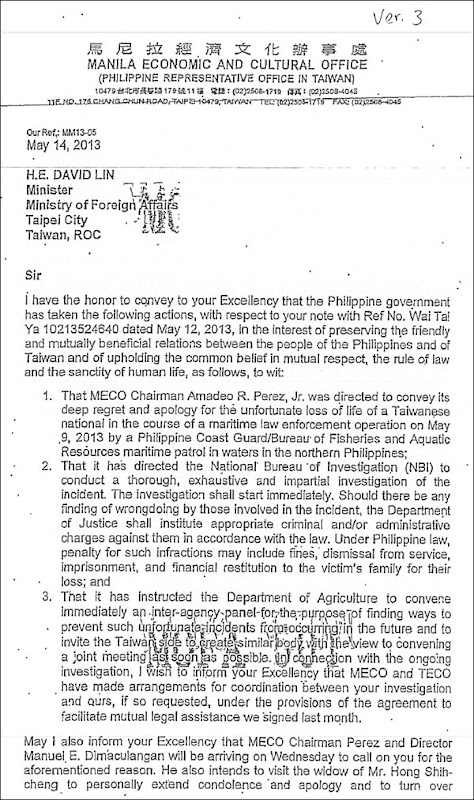 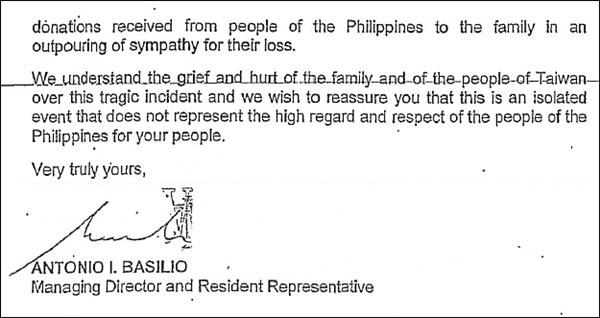 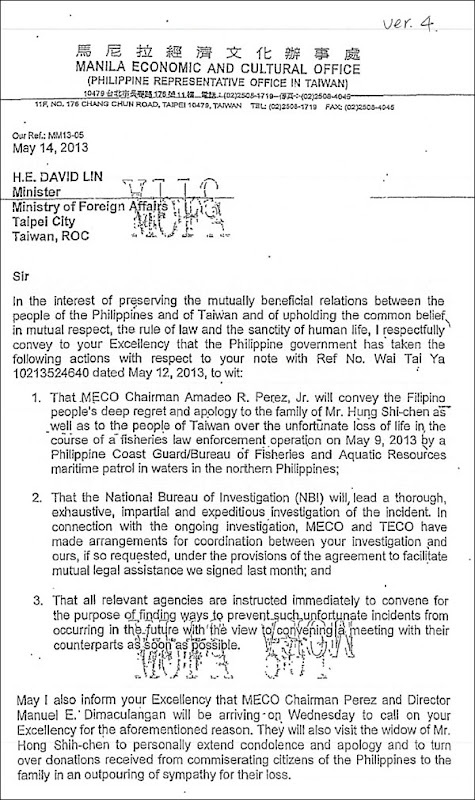 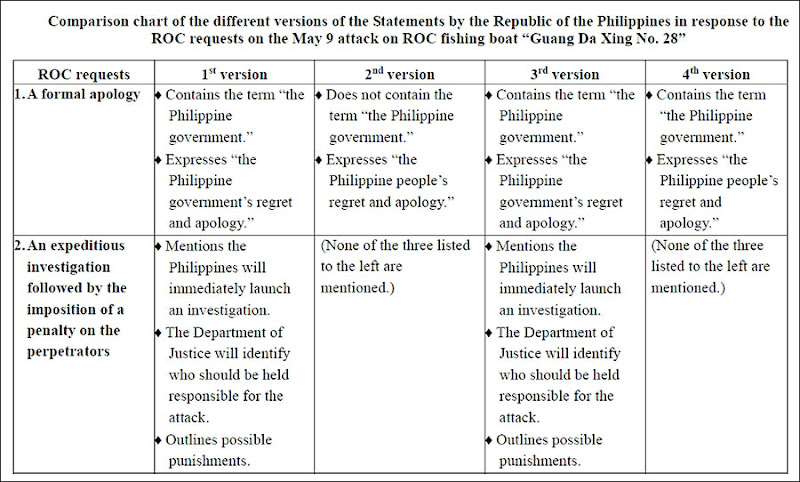 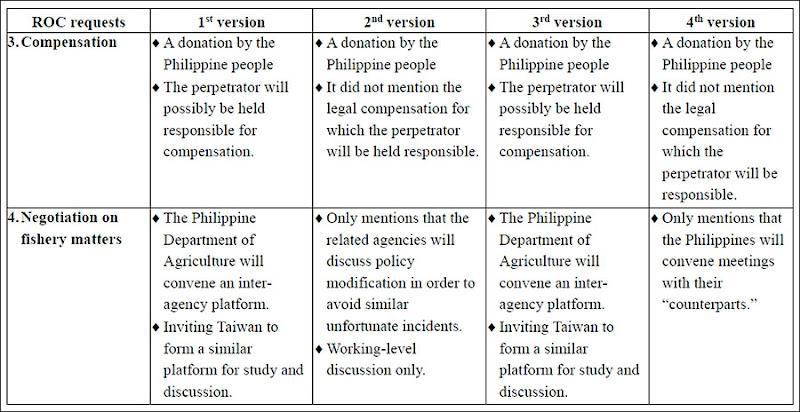