In 1991, the Philippine government established two sea lanes intended only as a shortcut for Taiwanese fishermen to take to the Pacific Ocean fishing grounds.

The reason, according to Rex Robles, a retired Navy Commodore, was that the Taiwanese fishermen used the pass-through-only sea lanes “to poach at will.”

“Taiwan’s fishing fleet has a reputation as voracious, and in this incident the Philippines said its coastguard was acting against illegal fishing; it opened fire to disable the engine of a Taiwanese vessel after it tried to ram a Philippine cutter. Taiwanese officials said the dead man was unarmed, and his boat was riddled with bullet holes. The public, whipped up by a tub-thumping press, was outraged.”

One of the fallouts of this fatal shooting of a Taiwanese fisherman in the same area where the sea lanes used to be is the demand by the Taiwanese government for the Philippine government to negotiate a fisheries agreement. 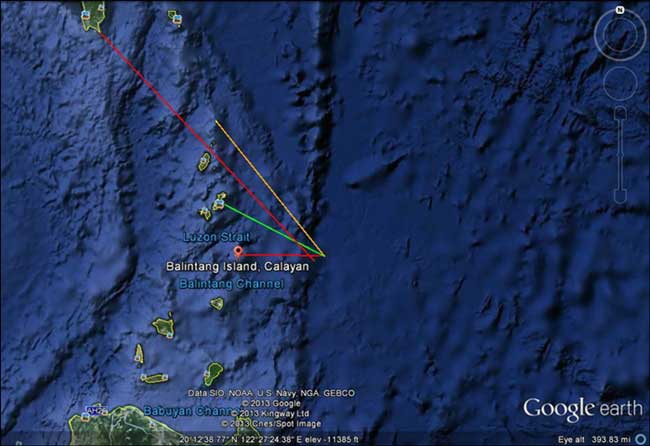 Taiwanese University Professor Chen Hurng-yu wrote in a piece for taipetimes.com that Taipei and Manila used to have some sort of “fishery cooperation”:

“In 1991, Taiwan signed a memorandum of understanding (MOU) with the Philippines on agriculture and fishery cooperation and on maritime navigation routes. As part of this memorandum, Manila specified two navigation routes along which Taiwanese fishing boats were allowed passage. It also paved the way for fishery cooperation between the two nations. However, the Philippine government unilaterally abolished this agreement in 1998, as it contravened sections of the Fisheries Code.”

My thanks to commenter @Martial bonifacio for providing the link to Prof. Chen’s piece.

I have not found the MOU to show the terms of that fishery cooperation.

However, another commenter on my site, who goes by the handle @Observer, sent me the following note:

“For information, there was a MOU between Taiwan and the Philippines for fishing activities signed August 1991. From this MOU the Aquino administration (Cory) (issued) the Executive Order 473 with the title: “Establishment of Sea Lanes for the use of fishing areas in the South Pacific Ocean subject to certain conditions”.

@Observer gave a link to an international site. And the EO was there. You can view it at the end of this piece. It is entitled: Establishment of sea lanes for the use of fishing vessels in proceeding to and from their fishing areas in the South Pacific Ocean, subject to certain conditions.

The EO was indeed a fishing cooperation agreement but only to give fishing vessels sea lanes “to and from their fishing areas in the South Pacific Ocean”. NOT to fish in those sea lanes and surrounding areas.

Retired Navy commodore Robles stated as much. The safety corridors were only for passing through, he said. Not for fishing. He also emphasized to me that the safety corridor provided by the Philippine government is proof that Taiwan recognizes Philippine sovereignty over that area.

“I think everyone has forgotten about the safety corridor which Cory Aquino signed during her term. It allowed Taiwanese fishermen to pass through Philippine waters on their way to the Pacific Ocean,” Robles who is now a security consultant said. [Note: We are not related.]

Lauro Baja, who used to be the Philippine envoy to the United Nations, also recalled the MOU being signed some time in 1991. He also stressed that the MOU only provided Taiwanese fishermen a “safety corridor” but no right to fish in that corridor.

EO 473, which arose from that MOU, was issued by President Benigno Aquino’s late president-mother Corazon Aquino on August 5, 1991. It established two sea lanes for foreign fishing vessels, including those from Taiwan.

EO 473 was signed on behalf of Mrs Aquino by her Executive Secretary, Franklin Drilon – now a senior Philippine senator and touted to be the next Senate President.

According to the EO, it was issued in order to address the growing number of disputes arising from the presence of fishing boats. Interestingly, the area stated in the EO appears to be in the same waters where a Taiwanese fishermen was recently shot dead by the Philippine Coast Guard.

This growing concern for rising disputes was stated in the following clause of the EO:

“WHEREAS, international disputes have frequently arisen involving foreign fishing vessels and their crews found inside the maritime jurisdiction of the Philippines, particularly those occurring in waters between the Bashi and Balintang channels and of the Batanes Islands in the China Sea;”

Section 2 also made it clear that whoever used the sea lanes recognized the waters as part of Philippine territory, subject to Philippine Coast Guard control:

Sec. 2. Requirements for the use of Sea Lanes. — All fishing vessels, using the aforesaid sea lanes, shall be subject to Philippine maritime, immigration and customs laws and regulations and to monitoring and inspection by the Philippine Navy and/or Coast Guard vessels…

In fact the vessels had to give prior notice:

The fishing vessels allowed to pass through were barred from fishing in the area. The fishermen on board had to:

The fishing vessels could not also use force or violence:

One government source told me the same thing that Rex Robles said: More often than not, the Taiwanese fishing vessels used the sea lanes to fish inside Philippine waters.

And now, the Taiwan government is using the death of a Taiwanese fisherman to force the Philippines to negotiate a fisheries agreement to enable Taiwanese fishing vessels to fish inside those waters.

Marine resources are part of the nation’s wealth. The Fisheries Code was enacted by Congress in 1998 to protect those resources. A source at the Bureau of Fish and Aquatic Resources pointed out to me that Section 87 of the Fisheries Code expressly forbids foreign vessels from fishing in Philippine waters. This is the section of the law that the Philippine Coast Guard was trying to implement at the time of the tragic shooting incident. Under this law, mere presence of a foreign fishing vessel is “prima facie evidence that the vessel is engaged in fishing in Philippine waters”:

Sec. 87. Poaching in Philippine Waters. – It shall be unlawful for any foreign person, corporation or entity to fish or operate any fishing vessel in Philippine waters. 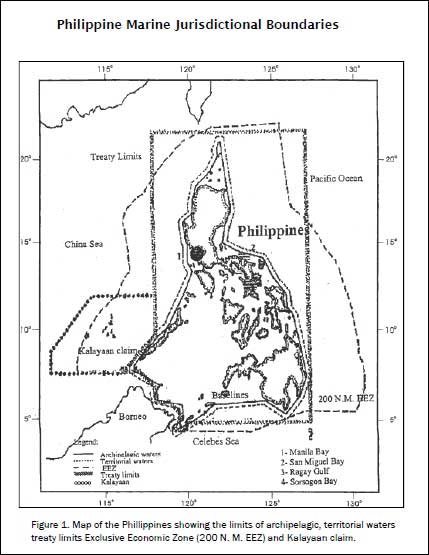 By 2010 – or over a decade after the approval of the Fisheries Code – the Philippines ranked No. 5 among the world’s top fish producing countries.

Now Taiwan wants part of the marine wealth that the Philippines has always considered hers.

Taiwanese leaders demand that the death of a Taiwanese fisherman in those waters should be compensated with a fisheries agreement.

I wonder if the Taiwanese fishing vessel was within those coordinates given as the sea lanes. Because even if EO 473 has been repealed, it already establishes the fact that Taiwan did recognize these areas as within Philippine territory.

EXECUTIVE ORDER NO. 473 – ESTABLISHMENT OF SEA LANES FOR THE USE OF FISHING VESSELS IN PROCEEDING TO AND FROM THEIR FISHING AREAS IN THE SOUTH PACIFIC OCEAN, SUBJECT TO CERTAIN CONDITIONS

WHEREAS, international disputes have frequently arisen involving foreign fishing vessels and their crews found inside the maritime jurisdiction of the Philippines, particularly those occurring in waters between the Bashi and Balintang channels and of the Batanes Islands in the China Sea;

WHEREAS, it is desirable that such disputes be avoided in the interest of the international relations of the Philippines;

NOW, THEREFORE, I, CORAZON C. AQUINO, President of the Philippines, do hereby order.

Section 1. Establishing of Sea Lanes. — There are hereby established two (2) sea lanes to be used by foreign fishing vessels in proceeding to their fishing areas in the South Pacific Ocean (outbound) and in returning to their home ports (inbound) which are described as follows:

Sec. 2. Requirements for the use of Sea Lanes. — All fishing vessels, using the aforesaid sea lanes, shall be subject to Philippine maritime, immigration and customs laws and regulations and to monitoring and inspection by the Philippine Navy and/or Coast Guard vessels and, moreover, shall:

b. Proceed without delay;

e. Refrain from any activities other than those incident to their normal modes of continuous and expeditious transit unless rendered necessary by force majeure or by distress;

g. Not pollute the sea lanes; and

h. Not carry out research or survey activities without the prior authorization of the Philippine Government.

Sec. 3. Guidelines for fishing vessels to enter designated Ports. — Such fishing vessels may be authorized to enter designated ports of the Philippines for the purpose of obtaining supplies and services; repairing of vessels; and unloading, shipping and trans-shipping of catches, provided that there are established in such ports certain infrastructures which will develop the aforesaid ports into a fishing base port, including improvements of harbor and mooring facilities; construction of ice-making, cold storage plants and relevant services, all investments in said infrastructure to be made consistent with Philippine investments laws and regulations.

Sec. 4. Implementing Agency. — The Department of National Defense shall implement the provisions of this Executive Order and monitor compliance with relevant Philippine laws and regulations.

DONE in the City of Manila, this 5th day of August, in the year of Our Lord, nineteen hundred and ninety-one.