I’ve just heard from GMA News reporter Maki Pulido that one of the good guys in the military is gone.

She said Brigadier General Dan Lucero had t died after experiencing dizziness after scuba diving this afternoon at 1:55 PM.

To find out more about the circumstance of his death, please click on this link.

Lucero died just a little over a month after being appointed 1st Infantry “Tabak” Division Commander covering 116 towns and seven cities in Western Mindanao – including Basilan. He is also concurrently the commander of the Army’s 103rd Infantry Brigade.

I met him while his military career was in the freezer because of his involvement in coup attempts against the late President Corazon Aquino. Interestingly, it was Mrs Aquino’s son who finally promoted him from colonel to general last year and to a senior post this April.

It was Lucero who patiently explained to me what soldiers were fighting for. And he also showed to me how soldiers could be honorable.

I only knew him on a professional basis – as a valued source who gave me many deep backgrounds on rapidly unfolding political events that embroiled the military. And who patiently explained to me the soldier’s viewpoint on politics, the communist insurgency and the Muslim rebel conflict.

He was also very humble. I didn’t know he was quite bemedalled.

He was a soldier to the end.

But really, Sir, in all those conversations we had, I never expected I would be writing an obit about you.

Melo Acuña, my colleague in Focap (Foreign Correspondents Association of the Philippines) posted the following tribute-song with this message:

This goes to a close friend, BGen. Dan Lucero (PMA ’83), 1st (Tabak) Division Commander who passed away in a scuba-diving accident somewhere in Basilan this afternoon. He was an efficient AFP spokesman and a dear friend. Godspeed. You’ve accomplished your mission. It’s time to rest.

happy trip sir!!! you were always busy fixing things, visiting troops, reviewing all the ISOs. He converted his troops from combat warrior to anti loggers and miners in Lanao. He installed cctvs in all the clustered precincts in Lanao to ensure “walang harassment sa voters.” Such a loss. 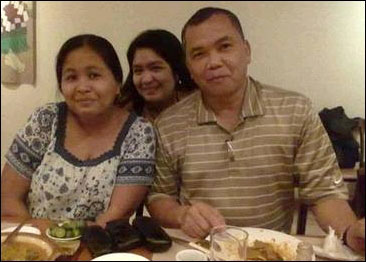 THE GENERAL WHO “WALKED” WITH THE PEOPLE

Marawi – The general named every one in the crowd one by one by their name showing how he had endeared himself to many of the Meranaos who have had a traumatic view of the army in the past. An MILF ceasefire leader, a priest, civil society, mayors, governors can only come together in Marawi City and Lanao because of one person who bridged when many local leaders could not. Brig. Gen. Daniel Lucero (PMA Class ’83), commander of the 103rd Brigade, of Campo Ranaw now renamed Campo Mamarinta Lao, has been promoted to Major General of the 1st Infantry Division to be based in Pagadian City.

“I rise everday to this view above the Lake in Lanao.. and walking with the people. ” Lucero said seeing the lovely view from above a mountain in the camp. H’s speech cited sharing power with the people, and that the Meranaos can rise above their challenges.

His decorated achievement report cited the fight against illegal logging (turning the confiscated wood to 600 chairs), warning multiple registrants during the reregistration period, , upholding the peace process with no encounters recorded in two years, preventing criminality amidst the Koko investment unrest and peace covenants,. Lucero with the MILF also publicly reconciled ancient vendettas in a first of its kind effort that brought a sentimental thrust to an unusual relationship found in a Moro people and a military command. He also cited the sacrifice of the exemplary work with some three soldiers being killed along the way, during an ambush at the Mindanao State University and another in a detachment protecting the Koko Razuman residence.

His recent Mindanao Bridging fellowship in the Asian Institute of Management (AIM) centered on electoral reform in Lanao and Marawi which saw the largest decrease of multiple registrants.

Lucero endorsed the locally-formed Multi-Sectoral Advisory Board pursuant to the Army Transformation Roadmap’s thrust to have a collaborative effort with the community.

Lucero served as AFP spokesman during the time of AFP chief Gen. Narciso Abaya from April 2003 to October 2004. He is among awardees of the Ten Outstanding Philippine Soldiers (TOPS) in 2011.

TOPS is an annual search led by the Metro Bank Foundation and the Rotary Club of Makati Metro, in partnership with the AFP, to honor achievements of military personnel. TOPS had this to say about Lucero: “A military man has long been seen as stoic and content to let his actions speak for him, but what differentiates a man who has been appointed to speak for his peers? This was a challenge faced by (then) Col. Daniel A. Lucero, who was appointed as spokesperson of Southern Command in Zamboanga City in 2002, and as Chief of the Public Information Office of the AFP and concurrent Spokesperson in 2003.”

“His 24/7 availability to the media, along with his skilful handling, allowed him to effectively respond to the negative feedback thrown against the AFP during his assignment as Spokesperson. As Commander of the 18th Infantry Battalion stationed in Basilan, his group received the Commanding General-Philippine Army Streamer Award for 2001. The success of the Balikatan Exercises became a model for the Americans who fought in Afghanistan and Iraq, and resulted in relative peace in Basilan from 2001 to 2006.”

Lucero graduated from the Philippine Military Academy in 1983 and holds Masters Degrees from the University of the Philippines, and obtained a degree in International Relations from the Australian National University. (Reference: mindanaexaminer.com)