And here’s why we should nag mayors about flooding

There are HUGE pipes that run under España Street. The pipes are big enough for people to walk through, standing upright. They were installed in the 1970s and are meant to drain off rainwater from the streets above .

Yet everytime it rains heavily and water cascades downhill from Quezon City, España immediately floods and the dark, filthy water ends up inside the huge compound of the University of Santo Tomas, turning its campus into a waist-deep lagoon. 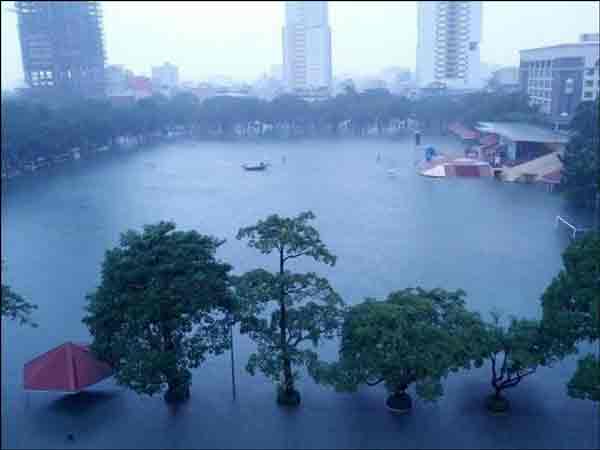 This photo of the University of Santo Tomas compound was shared on Facebook by Kat de Castro.

The pipes are now 70% crammed with filth, Public Work Secretary Rogelio Singson confirmed to me during one news forum at the Philippine Information Agency (PIA). He said:

May mga drainage (pipes) na malalaki (sa ilalim ng Espana) ang size 2.5 meters by 3 meters. Hindi naman siguro (cars can go through) but people can walk underneath there. But when we started checking, marami dito ang carrying capacity had been reduced to 30% because of the heavy siltation. (At) hindi na kaya linisin ng ordinary equipment diyan. We have to bring in specialty equipment.

Recently, Singson suggested the construction of a “water catchment basin” to ease floods in UST.

The news stories did not mention what Singson confirmed to me about those huge pipes running beneath España, that are now almost totally wasted.

I asked Nathaniel von Einsiedel to tell me more about  España’s drainage system.  Einsiedel was once the planning chief of the Metro Manila Commission (MMC), the all-powerful super body headed by then First Lady Imelda Marcos during her husband’s dictatorship. [Talk was rife then that Ferdinand Marcos gave his wife MMC and the Ministry of Human Settlements as part of his “I’m sorry” for having a scandalous affair with “B” movie actress Dovie Beams.]

After the Marcoses fled, MMC morphed into the now-castrated Metro Manila Development Authority (MMDA). Imelda basked in the glory of being Metro Manila’s super czar, while people like Einsiedel did the grunge work.

Einsiedel, an urban planner and an architect, started speaking out about Metro Manila’s floods last year. I was able to track him down and have the following conversation with him:

ME: Pubic Works Secretary Rogelio Singson said the rain drainage pipes beneath Espana Street near UST are 70% silted over and that special equipment is needed to remove the silt. Why is this?

EINSIEDEL: When the removal of silt is not done on a regular basis, it accumulates and hardens. It will require special equipment. It’s not any different from the clogging of inlets of street drainage. When dust and soil get washed into the inlets drainage and these are not regularly removed, they harden. You can’t just remove it manually. You need a high pressure water jet to break down that silt.

I can imagine in a large drainage canal underground, if the silt and dust are not removed regularly, you will probably need a bulldozer to do it. But I don’t know how they will do that underground.

ME: Where does all that dust come from?

EINSIEDEL: It comes from construction. Pag nakasama ang plastic bags, which makes it worse – when plastic milk mixes with alikabok (dust). It makes it even doubly hard. It hastens the clogging.

ME: How about candy wrappers? Do candy and chewing gum wrappers thrown by commuters and pedestrians on the streets contribute to clogging of drainage?

EINSIEDEL: It also has to do with the volume. There are supposed to be street sweepers. They are supposed to be sweeping all the dust, soil and cigarette butts thrown into sidewalks into the streets. They sweep it, put it in little piles. Sometimes it’s not collected. When rains come they are washed into the inlets of the drainage.

Pag may sumama na construction debris like broken pieces of road islands and planting boxes, this little rubble of stones also get into the drainage. They lessen the capacity of the drainage system to carry the floodwaters.

ME: Who has responsibility for regularly maintaining the drainage system?

EINSIEDEL: If I’m not mistaken, it’s a shared responsibility. Flood control in general is the responsibility of the MMDA (Metro Manila Development Authority) and the DPWH. But maintenance such as keeping the streets clean and collecting garbage is that of LGUs (local government units).

When you talk of the flooding problem, there are many players involved. Orchestration is a major challenge. They are at different levels. Where does the buck stop? It’s a major management issue. When you say flood control and drainage as a major function, it’s not enough to generalize. Exactly what is the DPWH and MMDA supposed to do?

In the construction (of flood control projects) they define this, when for instance a major pipe is being built, this is the responsibility of the DPWH.

But as to who is responsible for the maintenance of these pipes, that is not well-defined. There’s a lot of finger-pointing.

Compared to waste management, flood management has more components. How do you assign these different components to which government unit? Insofar as flood control is concerned, responsibilities need to be spelled out clearly. This is what I keep harping on – flooding is a management issue.

I asked Einsiedel about other aspects of Metro Manila’s yearly flooding, which is getting worse.

ME: Tell me about the Manggahan Floodway and how it’s supposed to ease floods.

EINSIEDEL: Only one-third (of Manggahan Floodway) is used for floodwaters. Two-thirds are occupied by informal settlers. This is a floodway. Why have people been allowed to build onto it? Here is a classic case of an expensive infrastructure that was put up and it’s not serving 100% of what it’s designed for.

If it was designed according to proper estimation of the volume of flooding, it should have worked: minimized the extent of flooding in Marikina valley. If you take a look at the map, it’s supposed to divert floodwaters from Marikina River to Laguna Lake during high tide of Manila Bay.

It’s specially supposed to mitigate or reduce the flooding along Pasig River and its tributaries.

What has happened? Since Typhoon Ondoy in 2009, the width of the floodway has been reduced by about a third. On both sides, you find structures and houses. So all these structures and houses were all flooded during Ondoy and they’re back there now. According to some people who lived in the vicinity, they just went up the embankment. They just temporarily lived on the embankment, waiting for floodwaters to recede. Then they went back again.

The construction of infrastructure is very, very expensive. But it’s not just a matter of building it. It was designed for a purpose . Yet people are allowed to live inside the Manggahan Floodway.

ME: The Manggahan Floodway crosses which cities and towns?

I know part of it is Pasig, part is Cainta. I’m not sure whether it crosses Taytay (Rizal).

ME: So there are informal settlers inside Manggahan Floodway.

EINSIEDEL: I was told there are even government buildings and offices inside the Manggahan Floodway. One time I talked to the mayor of Cainta (about the informal settlers inside the floodway.) He gave me a feeble answer – minana na lang daw niya problemang yon [He said he merely inherited the problem]. In other words he was not doing anything.

ME: What about the flooding of Provident Village in Marikina? Could that have been mitigated?

EINSIEDEL: Provident should not have been developed in the first place. This is one of the examples of what happens, when actions are not synchronized and coordinated.

When the DENR (Department of Environment and Natural Resources) declares an area to be alienable and disposable, then it becomes privately owned. Land that can be owned by private people and it can become titled. People feel they have the right to develop it. I think what happened in the case of Provident is that it was declared disposable;e and alienable together with parts of the Marikina River basin.

ME: Congress has been trying to pass a Land Use Law for decades. How important is a National Land Use law in reducing flood disasters?

A National Land Use Act can declare no-build zones and therefore should not be declared alienable and disposable and should not be titled. And people who will allow that to happen should be criminally charged.

ME: Why has Congress failed to pass a Land Use Law to this day?

EINSIEDEL: From what I understand, there are some vested interests being threatened. There are still a lot of Filipinos who believe if you have title to piece of land you can do whatever you want to do with it. The concept of stewardship is lost to these guys.