It was the chance of a lifetime: An ambush interview of world-famous pianist Cecile Licad.

It came about unexpectedly. I rarely get to watch at the Cultural Center of the Philippines and so when my friend, writer Gemma Corotan-Kolb, phoned out of the blue saying she had an extra ticket for a Cecile Licad concert and would I like to watch. I said yes.

It was a rare treat that included being with a gaggle of girls, one of whom recalled that when she was a little girl she joined a piano competition. The winner was Cecile Licad playing “Peter and the Wolf.” 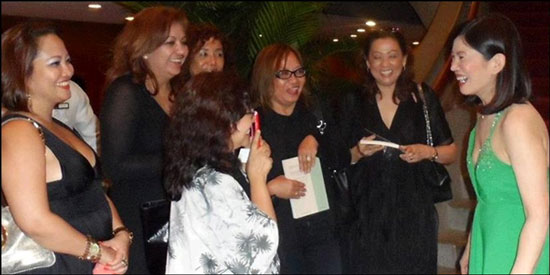 FANS ALL – (L to R) Back – Sheila Bazar, Marithel Luna, Elizabeth Silva, Gemma Corotan-Kolb, Rose Recto. (Foreground) – Me trying to video Cecil Licad and the latter obliging. PHOTO courtesy of Marithel Luna. Marithel has fond memories of being in the same contest which the young Cecile Licad won.

After the concert, I learned the US-based concert artist was signing autographs. I wanted to hear her speak. She wasn’t giving any interviews. So my only chance was while asking for an autograph.

I decided to video it. But I have to apologize. I was standing so near her that I could not get all of her face all the time. Plus I’m a full-time beginner when it comes to videos.

Still I’m glad I got her on video. She is quite animated when she speaks and has a pleasant husky voice.