It takes a Pope to deliver the message to our Catholic bishops to live more simply.

This time, Pope Francis zeroed in on the trappings of influence and power that some of our bishops are fond of.

“It hurts me when I see a priest or a nun with the latest model car, you can’t do this.”

“A car is necessary to do a lot of work, but please, choose a more humble one. If you like the fancy one, just think about how many children are dying of hunger in the world.”

The Catholic Bishops Conference of the Philippines has just announced that Archbishop Socrates Villegas is the new CBCP President.

Monsignor Villagas is the prelate who stated during the heated debates against the Reproductive Health bill that “contraception is corruption”.

See my story by clicking on this link.

I expect him to be very eloquent on the issue as the Church and its supporters try to stop the RH Law from taking effect.

It was a very oblique way of telling priests the world over, including our very own bishops, to be true to their calling and live simple lives. ANSA news agency said the Pope himself was driven around in a Ford Compact car – which is half the price of the Mitsubishi Montero that one Philippine bishop asked of the former Philippine president to give him for his birthday three years ago.

“I hope you will never fail to give a brand new car which would serve as your birthday gift to me.”

“For your information, I have with me a seven-year-old car which is not anymore in good running condition. Therefore, this needs to be replaced very soon.”

His choice of car was a Mitsubishi Montero worth P1.7 million. 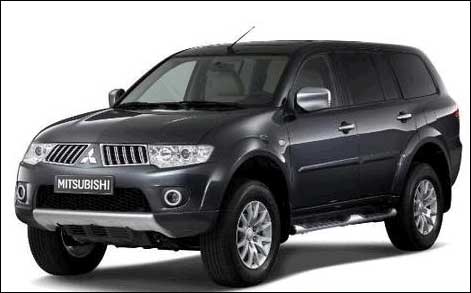 Six other bishops were given cash with which to buy new cars.

Bishop Pueblos found nothing wrong about asking a head of state for a brand new car and choosing a luxury car that’s a gas guzzler. 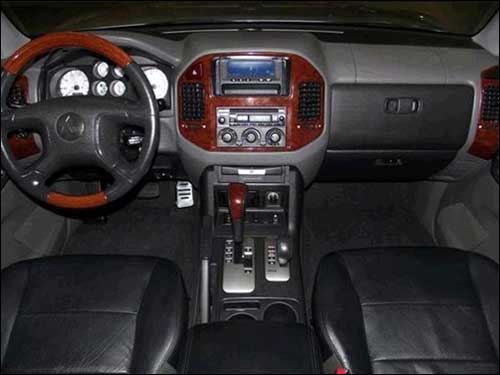 It is actions like these that make Catholics frown on their faith.

A restaurant that serves the favorite fatty foods of prelates? How humble is that.

I wonder how Pope Francis would react to the restaurant that the Catholic Bishops Conference of the Philippines allowed to be put up in its own building in Intramuros, Manila. While tourists and food lovers would probably find it quaint to see the various dishes in the menu tagged as the favorite of this or that Cardinal or Bishop, I found it slightly revolting.

Perhaps because we were taught early on in the Catholic school that I attended in my formative years that sacrifice was the heart of my religion. We were made to read the lives of various saints who even secretly wore hair shirts, deprived themselves of luxuries and fasted and prayed as often as they could.

But the menu of Ristorante delle Mitre – photos of which you can view below – appear to show that the leaders of the Philippine Catholic Church indulge in good food – food that the poor majority whom they were bound to serve by their priestly vows coud least afford. The resto apparently has the blessings of the Catholic Church hierarchy here.

I really think the menu below gives the wrong impression of the Church of the poor. All the photos were taken by my hubby Alan when he happened to go to Intramuros to tour some foreign friends: 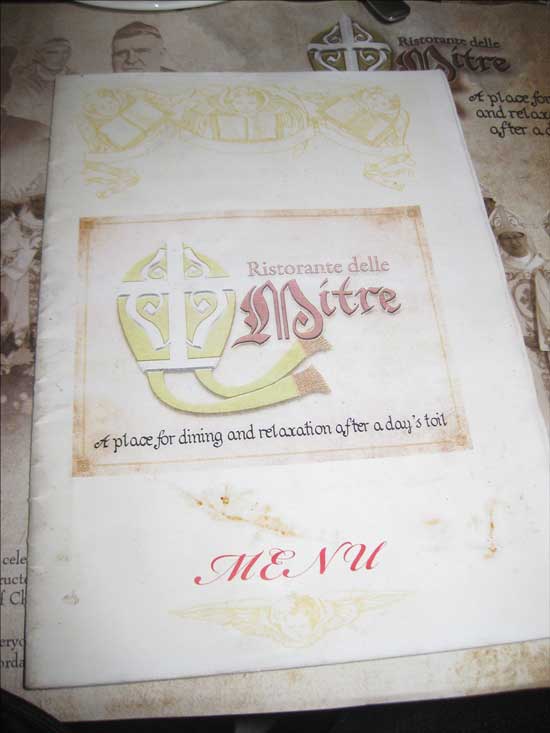 Menu of Ristorante delle Mitre at the Catholic Bishops Conference of the Philippines building in Intramuros, Manila – PHOTOS by Alan Robles 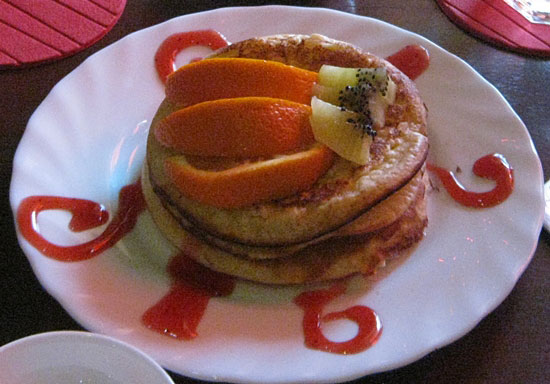 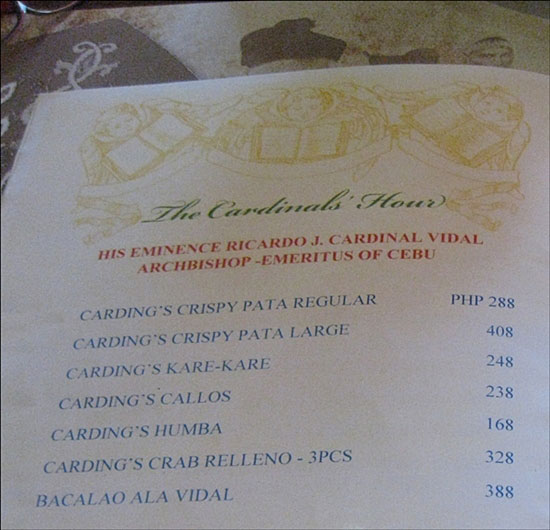 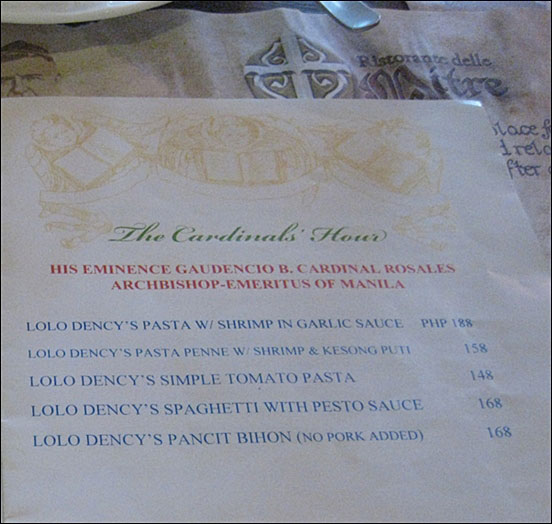 Even Cardinal Rosales’ favorite dishes, though more modestly priced, are still not affordable to the poor – PHOTO BY Alan Robles 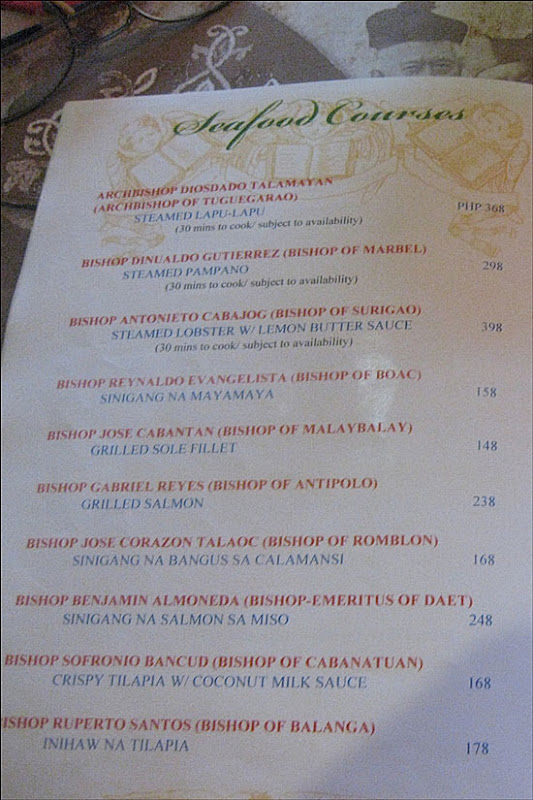 The seafood selection at the restaurant inside the CBCP are a food lover’s delight but out of reach of the poor, maybe, except for those who are fishermen – PHOTO by Alan Robles 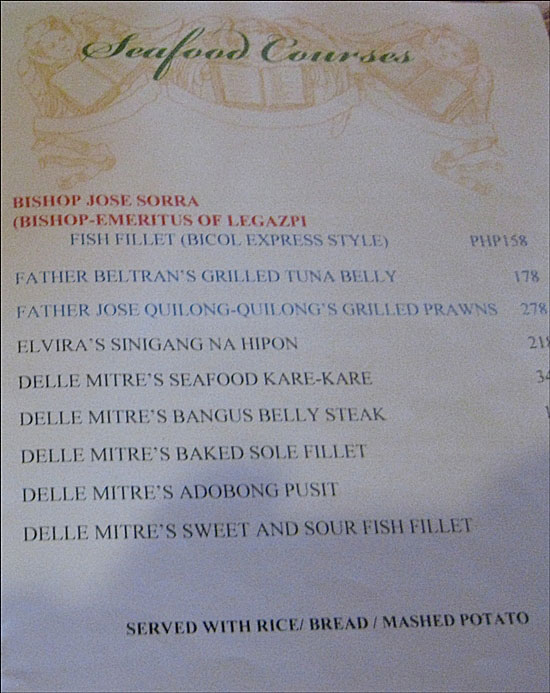 I don’t know why, but the menu selections really remind me of Padre Damaso in Jose Rizal’s scathing satirical novel, Noli me Tangere – PHOTO BY Alan Robles