With the continuous incursions of Chinese ships into Philippine waters, a friend recently told me she is seriously thinking of migrating to another country. 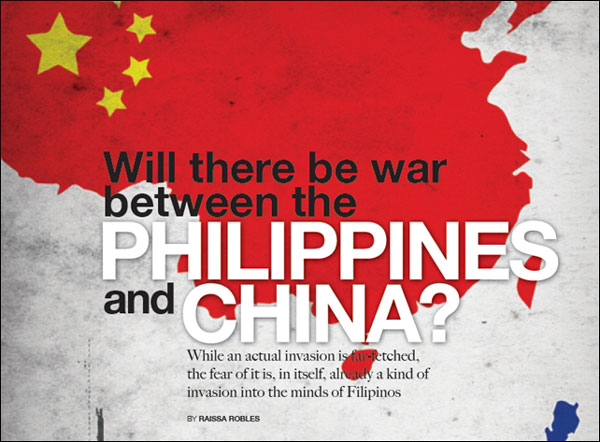 China might invade the Philippines, she said. When, she doesn’t know, but she said she’d rather go while still young and able to.

While I see an actual invasion as far-fetched (attacking and occupying Manila would be strategically and politically useless to China), the fear of it is in itself already a kind of invasion into the minds of Filipinos. It’s a fear that has been stoked by the continuous threatening presence of missile-armed Chinese vessels in Philippine waters.

It hasn’t helped that one senior Chinese officer, Major General Zhang Zhaozhong, openly bragged this May that the People’s Liberation Army Navy (PLAN) has all but wrapped Panatag or Scarborough Shoal (which China calls Huangyan Island) with a multi-layered strategic “cabbage.” I will explain this in detail later.

I asked experts for a threat assessment. Two of them dismissed the near probability of a Chinese invasion or an attack on Manila. But they both said China is probably waiting for any Philippine action in the South China Sea that it could brand a “provocation”, to justify a counterstrike.

The counterstrike could be in the form of another Chinese military takeover or occupation of a Philippine islet, shoal or reef. This would likely be brief and bloodless, Dr. Jay Batongbacal told Asian Dragon.

“They could do this without firing a shot,” said Batongbacal, a University of the Philippines law professor and a specialist on the Law of the Sea and maritime resources and disputes.

“All they need to do is to prevent the resupply of those islands” in the Kalayaan Island Group – which Beijing insists is part of their Nansha Islands. 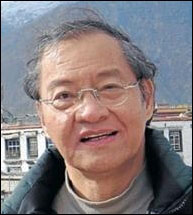 He explained to Asian Dragon why PLAN named their strategy after a vegetable. It’s a blockade to “squeeze out” the Philippines from the area. And like a cabbage, the blockade consists of several layers.

Santa Romana said the inner layer or circle consists of Chinese fishermen. The layer above that are the CMS (China Marine Surveillance), a paramilitary maritime unit), and FLEC (Fisheries Law Enforcement Command), a unit to protect Chinese fishermen. Though heavily armed, both the CMS and FLEC are still considered civilian units. But in the outermost ring are the warships of the navy. They hover protectively over all the other layers.

“It’s a bit of a trap. They’re waiting for us to make a mistake which they would label a provocation, then they would respond with superior force to try to effectively occupy our territory,” Santa Romana said.

China’s occupation of another Philippine islet, shoal or reef could backfire, though, said Vinod Saighal, a retired Indian army major general and security specialist who recently delivered a lecture on “India’s expanding maritime interests in Southeast Asia” at the University of the Philippines Asian Center. 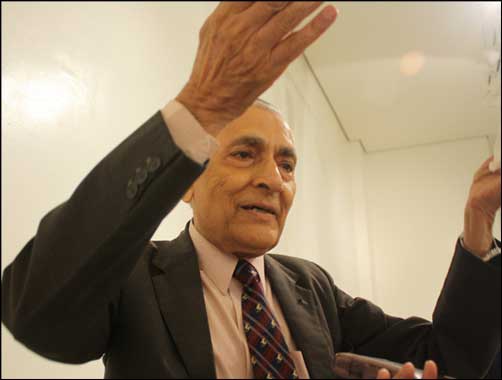 He said this could make China’s neighbors wary of its intentions, wary enough to band together.
In his talk, General Saighal said China intends to dislodge the United States as the leading power in Asia.

And geographically, the Philippines happens to be in the way of that ambition to become a world power, wielding a blue water navy that can project China’s power outside Asia.

Perhaps, this is is partly because the Philippines is an archipelago. It shares no land boundaries with any country. It therefore feels constricted to have an unwanted alien presence so near its shores.

However, as the old saying goes, “geography is destiny.” And it is for this reason that China’s ships continue to hover so aggressively near Philippine shores.

If you look at a map of China – you will see that although it is huge, it is mostly land-locked. No portion facing the sea has any clear passage to the Pacific Ocean. One area faces the South China Sea. But Chinese ships based there would have to pass between Taiwan and the Philippines to reach the Pacific Ocean.

Another area, although facing the ocean, would still have to pass between Taiwan and Japan – both American allies.

In the event of a conflict, even submarines could be easily detected and neutralized.

“Exactly,” Santa Romana agreed. “We are in a strategic area. The Chinese strategists call it ‘the first island chain’ that runs from Japan, Taiwan and the Philippines. What the Chinese strategist would like to achieve is to have the ability to control their near seas – the East China Sea and South China Sea, including the Taiwanese Strait.”

Scarborough Shoal is part of that island chain.

Earlier, I had asked General Saighal whether other countries would mind if China were to start building a military installation on Scarborough Shoal.

He replied: “I think the whole of Asia would be concerned. It’s not mainly a Philippine thing. It’s an attitude (of China) that it’s becoming more and more aggressive.”

It was only while Santa Romana was explaining that I realized another meaning of ‘the first island chain’. It meant these islands formed a chain around China’s neck. These islands were choke points for China’s global ambition.

“They (China) want to break through their first island chain but we are in the way,” Santa Romana said.

“Their immediate goal…is to achieve some control because right now they cannot control their near seas,” he said.

China has long been paranoid about the sea. According to state-owned China Daily in a recent article: “From the Opium War in 1840 to the founding of the People’s Republic of China in 1949, the country has suffered more than 470 offenses and invasions that have come from the sea.”

Former Philippine foreign secretary Domingo Siazon has described the heightened conflict between China and the Philippines as that between “an elephant and an ant.”

What can an ant like the Philippines do? One option seems to be to find a bigger elephant and hop on its back. To this end, the Philippine government has floated a plan to give US troops, ships and planes wider access to its existing ports, airports and military camps.

Immediately after the plan was unveiled, a stinging commentary was published in the People’s Daily of the Communist Party of China. It called the Philippines “a crying child”; accused it of committing “seven sins” in the South China Sea; and warned of a counter-strike” if such provocations continued.

Siazon suggests that instead of relying on just one elephant, the Philippines should gather a herd. He said Manila “must strengthen its defense ties with the USA, Japan, Singapore, Indonesia, Australia, New Zealand, India and Russia.”

General Saighal is in full agreement with this approach. He said that what the Philippines and other countries facing similar territorial conflict with China needs is “a security architecture in the region to restrain China (so) that the costs of aggression would be much too heavy. If you have that architecture in place, China will not attempt anything.”

[This article first appeared in the July 2013 issue of Asian Dragon magazine. My thanks for allowing me to post this on my site.]