It’s hard to believe that nobody blinked when a small non-government organization (NGO) with an initial capital outlay of P1,400 actually submitted routine reports to the Securities and Exchange Commission (SEC) on June 4 and July 26, 2012, saying it got nearly P140 MILLION (the exact figure is P139,549,900) in pork barrel funds from the following senators and congressmen:

At that time the Peoples Organization for Progress and Development (POPDF) Foundation, Inc., did not tell the SEC how it was able to solicit such huge outlays from nine lawmakers.

I can only surmise that the SEC was — and probably still  is —  too swamped with reports to note such huge fund inflows into a small NGO.

At any rate, five months ago, the NGO’s chairman/president, Merlina Suñas, went to the National Bureau of Investigation (NBI) and told a story that wasn’t in the SEC reports.

Suñas revealed her NGO was fake.

It was actually being used to launder pork barrel funds. She claimed the mastermind was none other than her employer at JLN Corporation – Janet Lim Napoles.

According to Suñas, Napoles created NGOs like POPDF to serve as conduits for pork barrel and other government funds.

I will tackle the link between the NGOs and Napoles in another story.

What I’d like to do now is deal with the official submissions of Suñas to the SEC last year – long before the pork barrel scandal stories broke in the media.

Then I will try to explain these submissions in the context of her revelations in the affidavit she submitted to the NBI in April this year.

Her affidavit, oddly, has never been published in mainstream media. I’m posting it at the end of this piece.

First, the significance of  Suñas’ reports to the SEC

Since the pork barrel stories broke over a month ago, no senator admitted to, much less apologized for, giving money to an NGO linked to Napoles.

Instead, we have been given the following statements:

Senator Juan Ponce Enrile: “Alam mo, walang dahi-dahilan, kung may kasalanan kami e di parusahan (You know, there will be no excuses. If we have erred, then punish us….It’s OK. For me, [if] they can investigate it, better.”

Senator Jinggoy Estrada: “It is not up to the senators to determine whether an NGO is bogus or not. Alangan naman na kami pa ang magsasabi na, ‘Uy, bogus ‘yan.’ How will we know?”

Senator Bong Revilla: “Are they destroying my name because there were some who are pushing me in the 2016 [presidential elections]? Nonetheless, I am not surprised with this demolition job against me in the name of politics.”

This is why Suñas submissions to the SEC are significant. They were not submitted as part of an expose or as a complaint — they were routinary reports (sworn statements co-signed by POPDF treasurer Elizabeth Mendejar) submitted to comply with an SEC requirement dated June 22 2006.

That  rule, Memorandum Circular No. 8, required all NGOs to annually disclose their “sources and amount of funds”, “application of funds” and the “accomplished/ongoing projects/programs” using these funds.

POPDF was formed in 2003. From 2006 to 2011, it had NEVER complied with the SEC memo. I can only presume it decided to be more forthcoming with its info when the Aquino administration took office in 2010.

POPDF finally  submitted its required reports in June and July 2012. Despite this, Director Jose P. Aquino of the  SEC Investor Protection and Surveillance Department still issued it a “warning” and slapped a fine of P9,812.50.

“The foundation is hereby advised to take appropriate measures to ensure faithful and timely compliance with the reportorial requirements of the Commission and the laws…[and] too avoid similar incidents with the WARNING that future transgressions will subject the foundation and its officers to more severe penalties and sanctions.”

Instead of telling you what Suñas’ SEC reports contain, I prefer that  you read them and make your own conclusions.

I don’t know how true the contents of the reports are. But I sure would like to hear an explanation from the identified lawmakers.

Just an added bit of explanation, if you see the “USER NAME: roblesgirl2013”, that’s me. I realized only later on that the user name I chose would be printed on the copy as well by the SEC computer system.

The SEC submissions are in the form of sworn statements from Suñas and POPDF treasurer Elizabeth Mendejar covering the years 2006, 2007, 2008, 2010 and 2011. I did not include 2009 because she reported that there was “no transaction” that year.

POPDF did not file any annual reports for any year.

Napoles-linked NGO said in 2006, it got pork barrel from Senators Enrile and Loi Ejercito-Estrada from raissarobles

NAPOLES-linked NGO said in 2011, it got pork barrel from Senator Jinggoy Estrada from raissarobles

The context of the SEC submissions

When Suñas submitted these reports to the SEC, no alarm bells rang. POPDF was merely fined by the SEC for not reporting on time.

You would think the SEC should be one of the first lines of defense in the fight against corruption when it comes to smelling out fishy businesses and organizations. But it’s not.

My point is: Suñas’ SEC submissions actually bolster what she said recently in her affidavit to the NBI, when she turned whistleblower.

It was only when I re-read her affidavit in the light of her SEC submissions that I clearly understood what she meant when she claimed “personal knowledge” of how Napoles’ JLN Corporation implemented government-funded projects. She said “one important aspect” of the scheme was the creation of foundations on orders of Napoles.

She said the foundations accepted the money from lawmakers’ pork barrel and then turned around and gave this to Napoles.

Where is Benhur Luy’s affidavit?

Her affidavit would seem to bolster what whistleblower Benhur Luy said in his own affidavit.

Interestingly, I cannot seem to get my hands on Benhur Luy’s affidavit.  I’ve heard one major daily has a copy because, perhaps, of its close relations with the NBI.

Like Suñas, Benhur Luy was an incorporator and  a member of the board of trustees of POPDF. He said he was illegally detained by his cousin Janet Lim Napoles on December 19, 2012. A judge apparently saw merit in his claim and recently issued warrants of arrest against Janet Lim Napoles and her brother Reynald Lim.

Napoles and her lawyers insist that Benhur Luy was never detained but had simply gone on a “spiritual retreat” lasting over three months of his own volition.

Suñas has a different take on Luy’s disappearance. In her affidavit, she graphically described the day Napoles got mad at Luy. Napoles accused him of pocketing some of the pork barrel funds, Suñas said.

Doesn’t THAT sound so familiar?

Doesn’t it remind you of the break-up between Chavit Singson and Charlie “Atong” Ang over the bingo two ball, which eventually dragged then President Joseph Estrada into the picture?

Napoles claims someone else is the mastermind of the scam. I wonder who she will name.

Meanwhile, here is Suñas’ take on the issue: 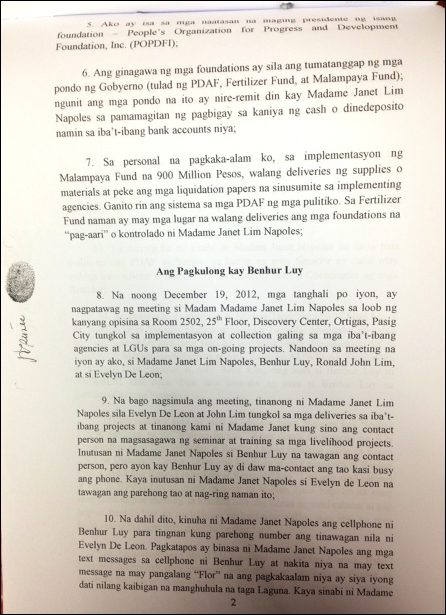 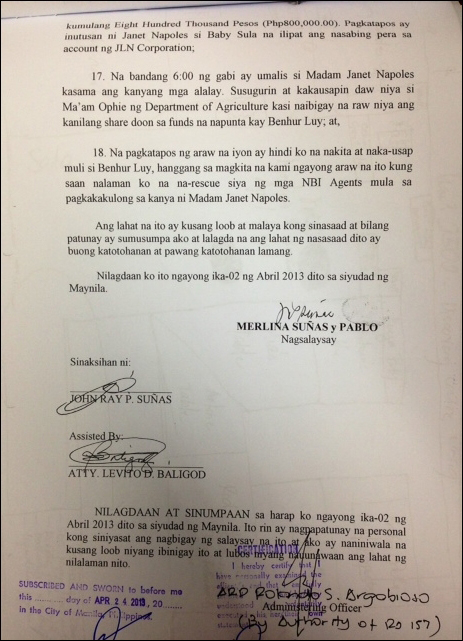