Hi, I will be live-blogging the #MillionPeopleMarch at the Rizal Park in Manila and elsewhere in the world.

You can watch the livestream of the events by clicking on the link below: http://www.abs-cbnnews.com/ancliveevents

The crowd today, even before the rally has really gotten underway, is as massive as the crowd that gathered on June 30, 2010 when   Benigno Aquino III was sworn into the presidency. The size of the crowd has the potential of exceeding the numbers on that fateful day.

The pork barrel scam has finally been picked up by international news media.

CNN did this report on the “Filipino woman on the run” –

And this evening, BBC World Service phoned me to ask me about the protest. I told them to interview my hubby Alan who covered the protest for South China Morning Post (HK). His SCMP piece will come out tomorrow.

BBC is calling him in a few minutes.

How it all started

It began with just this one guy – Ito Rapadas – posting this on Facebook: 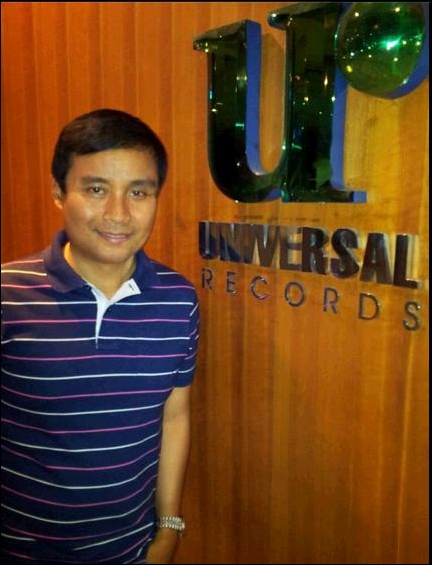 His post was picked up by  Peachy Rallonza-Bretana, who in turn posted this on Facebook. She added a specific date for the protest:

The post of Rapadas and Bretana  –  who are apparently not Facebook friends but friends of friends – led to this crowd today: 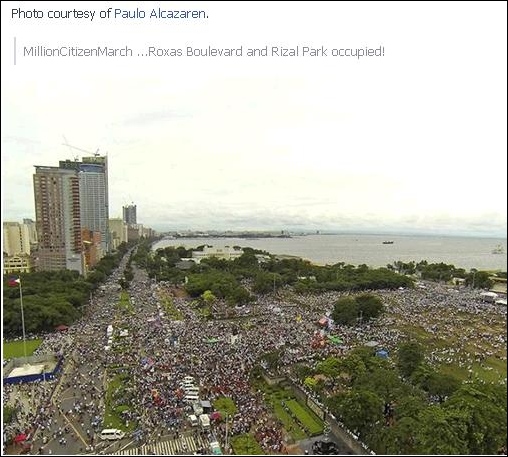 Here is Bretana in the protest site with GMA Network journalist Tina Panganiban-Perez: 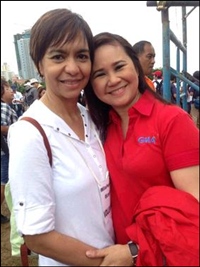 HMMMM. What could be next? 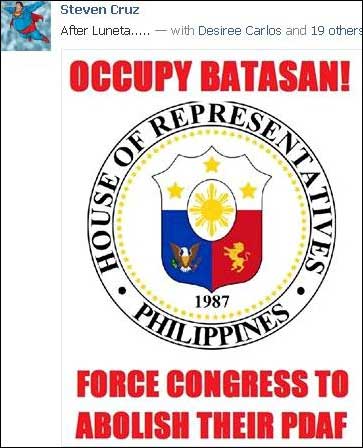 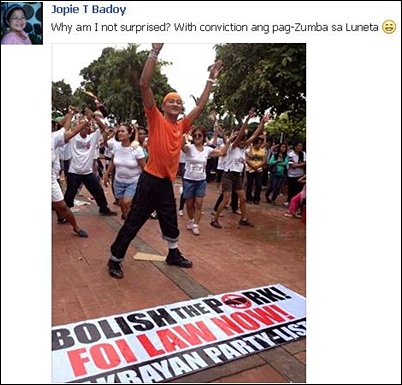 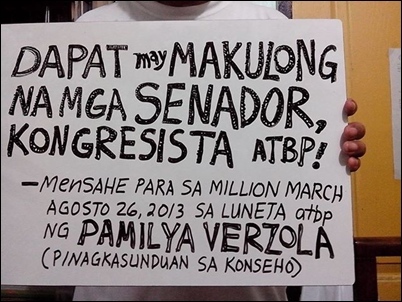 NOT NECESSARILY IN THAT ORDER.

Here is a beautifiul photo from Paolo Alcazaren: 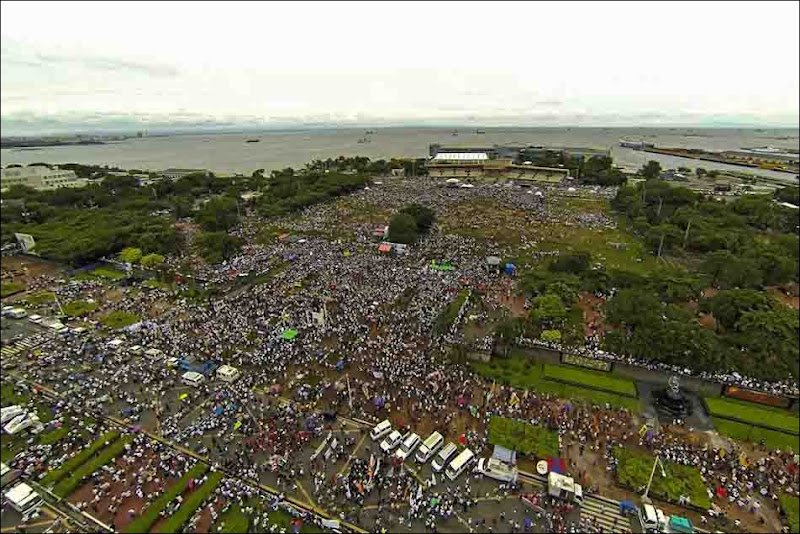 Amazingly, after the rally, the site was CLEAN: 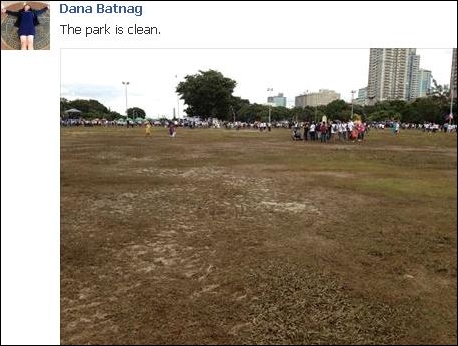 If this mob can hold a huge protest action without littering; God only knows what else it can accomplish. Watch out! #MillionPeopleMarch

UPDATE TWENTY-TWO: When the entire country is hammering on the need for more accountability from politicians, Senator Loren Legarda issues a press release that would discourage ordinary people from criticizing politicians. Isn’t this another form of libel law, only harsher?

Below is her press release –

Senator Loren Legarda has proposed a measure seeking to increase penalties for accusing an innocent person the commission of a crime or intriguing an individual for the purpose of damaging his reputation.

“Our reputation is an aspect of our lives that we continuously seek to protect, as public perception about us undeniably extends to our loved ones, our families. Even with diligent efforts to maintain good standing and display acceptable character in our society, we still might be faced with circumstances that can inevitably place our long-safeguarded reputation to disgrace,” Legarda explained.

“Whether it is the simple deed of spreading intrigues against a person, or the more serious act of implicating someone in a crime that he has not committed, incriminatory machinations blemish an individual’s character and may eventually ruin a person’s life,” she added.

Legarda said that while incriminatory machinations are penalized under Articles 363 (Incriminating innocent person) and 364 (Intriguing against honor) of the Revised Penal Code, penalties fail to sufficiently compensate the resulting damage to victims and thus prevent them from attaining full justice.

In this regard, the Senator filed Senate Bill 336, An Act Amending Articles 363 and 364 of Act No. 3815, Otherwise Known as the Revised Penal Code.

This proposed legislation aims to intensify the punishment for those proven guilty of incriminating innocent persons and intriguing against honor.

“It is my hope that with the positive action of the Senate on this measure, we will be able to ensure a society that fully respects the dignity of its citizens,” Legarda concluded.***

UPDATE TWENTY-ONE: In the Kingdom of Saudi Arabia, Filipino workers hold their own protest: 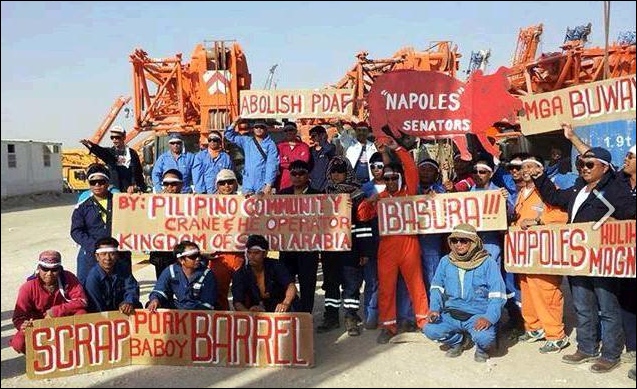 UPDATE TWENTY: Expect politicians to try to curb the power of the Internet with a vengeance. Be vigilant.

He said the government will have a NEW SYSTEM. Specific projects will have to be proposed as “line item budgets” in the national budget.

Lacierda also defends the need for a pork barrel for lawmakers. He said we depend on lawmakers to tell government what to do in their districts.

My comment: But Sir, it doesn’t work that way. Congressmen keep inserting items in the budget during the bicameral conference committee.

Lacierda details those ITEMS that will be disallowed from pork barrel. He said it will be a “very restricted menu” that will be allowed. No more asphalt overlay, medicine and other “soft projects”.

Lacierda: “Some of them influence the process of selecting suppliers or the NGOs in projects.” He says that would be barred under the new system.

Lacierda: the “new reform measures” will have no name.

He said everything will be bid out.

My comment: The government must disclose who the winning bidders are, the contact person, THE CONTRACT ITSELF, and the contact numbers. So that the contracts can be VERIFIED.

Lacierda: “you wanna make sure your taxpayments are not going to waste, you help us monitor the projects.

My comment: Sir, then help the ordinary Filipino across the country monitor projects. Post EVERYTHING online – especially the name of the contractors, the contract itself, the contact persons, the phone numbers.

UPDATE SEVENTEEN: Is there anything VAGUE about Faye Valencia’s message? 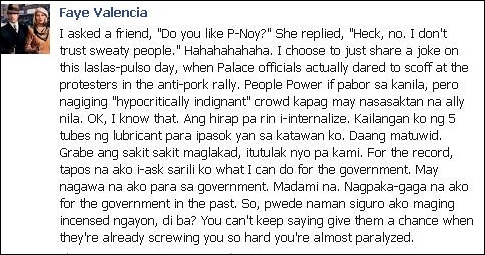 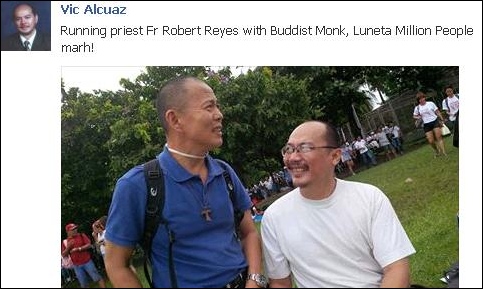 UPDATE FIFTEEN: One of the politicians who fired up the protests with her remark 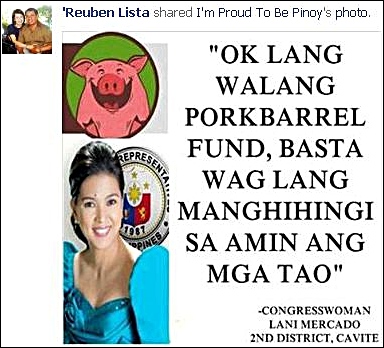 UPDATE FOURTEEN: Hmmm. Is this the next venue for protests?

UPDATE THIRTEEN: Thanks @Cha – video of ousted Supreme Court Chief Justice Renato Corona being booed out of the rally

UPDATE TWELVE: The crowd reminds me of the rallyists after the assassination of Ninoy Aquino. They were playful, festive and varied. But beneath this seeming harmlessness was a growing potential to make change. This potential took three years to build up. It erupted in a “people power” Philippine style in 1987.

So I would advise politicians – don’t underestimate this crowd that looks so harmless right now. 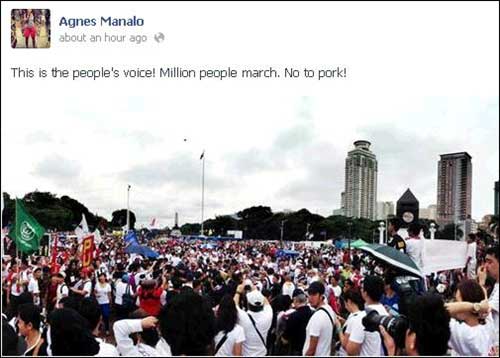 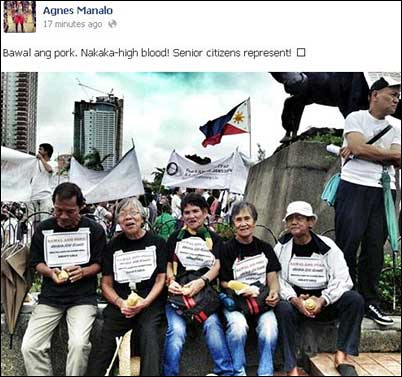 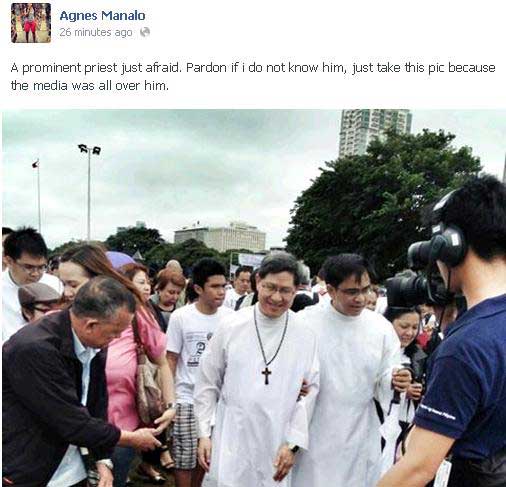 UPDATE TEN: One of my favorite groups of rallyists: 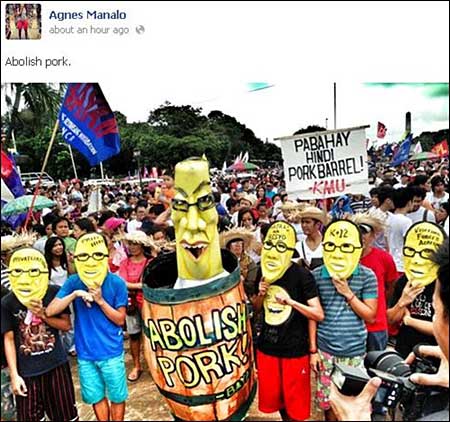 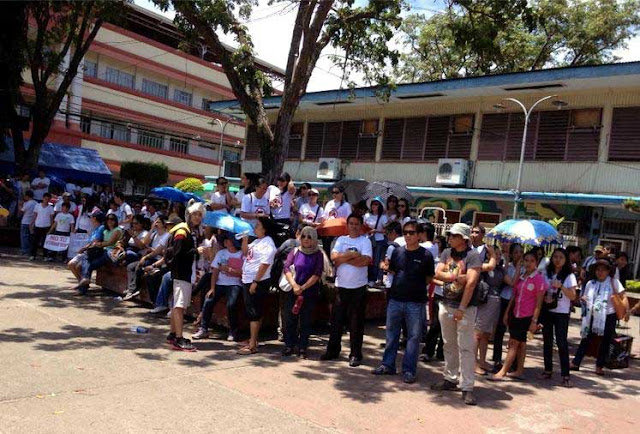 UPDATE SIX: Mikey Bustos @MikeyBustos
From what I understand, Philippines is a rich country with bad people managing a lot of that money. It changes today.

My comment – I hope so. Democracy is a system that you have to work at day by day, everyday, every minute, every hour. Our big mistake as a people has been to leave the workings of democracy to the politicians. 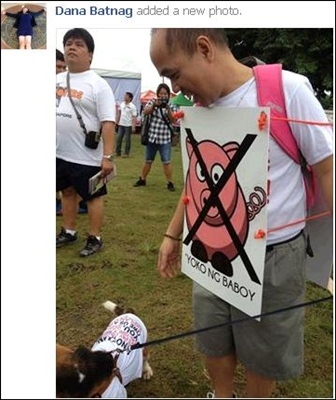 UPDATE FOUR: Cardinal Tagle, the Archbishop of Manila, has arrived in Luneta for the protest rally.

UPDATE THREE: Alan Robles just told me he saw former Senator Francisco Tatad – Corona’s sidekick during his impeachment trial – inside Manila Hotel. Guess Tatad was either less brave or more prudent than Corona. He hasn’t shown his face to the other rallyists.

UPDATE ONE: Renato Corona, who is in the march with his wife, has just been booed in front of an Atenista crowd – saying “magnanakaw”, “epal”