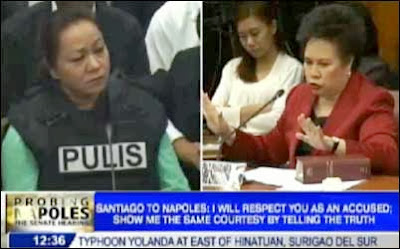 The long awaited session with main pork suspect Janet Lim Napoles before the Senate Blue Ribbon Committee has turned out to be a dud so far.

Sometime into the proceeding Senator Miriam Santiago appeared and managed to hijack the proceedings with a lengthy tirade-cum-lecture. about the fine points of the law on a person invoking the “right to self-incrimination” compared to saying “I don’t know”. She convinced, or browbeat, Napoles into invoking the right against self-incrimination as against just saying “I don’t know”.  There’s a difference between the two responses so it will be interesting to see what the legal fallout from this will be.

As well as the merits of turning state witness – she told Napoles that the latter will be 90 years old when she gets out of jail if she is convicted of plunder.

Santiago sounded like she was equally interested in grinding her own axes and going after her political enemies while clearing up the pork barrel issue.

She also called someone else a “child molester” but I didn’t quite get the reference since my computer suddenly turned itself off.

Senator Santiago inveighed against PRs, calling them “cockroaches” and “assholes.” She clearly had specific personalities and enemies in mind.

She also mentioned three names: Jimmy Policarpio, Brian Yamsuan, and his wife Cathy. Their names are now in the official senate records. [NOTE: Personally, I knew Jimmy Policarpio, a long-time senior aide of Ernesto Maceda while the latter was in the Senate.]

Two of the newbie senators – Sonny Angara and JV Ejercito – tried hard not to laugh at Santiago’s sound bites. 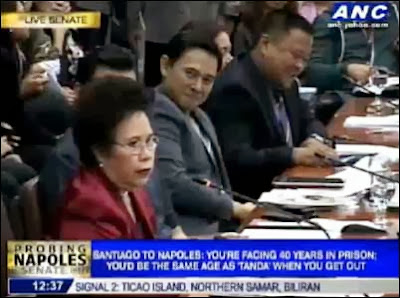 Senator Santiago topped all her controversial statements during an impromptu press conference with reporters when she referred to one colleague in the Senate as the “grandfather” of the pork barrel scam.

When one reporter asked her to clarify whether Santiago was referring to Enrile,

His paternity is unquestioned. His DNA has been confirmed.”

Enrile did not attend today’s public hearing. The Senate is in recess this week.

Here are some more choice news bites from Senator Santiago:

Referring to herself, Santiago noted:

She launched another broadside:

“Ignorance can be treated but stupidity is forever.”

At the start of her questioning, Santiago assured Napoles – much like a cat purring at a mouse caught in its claws:

When Napoles refused to answer  her question saying “I do not know,”  Santiago told her:

“I invoke my right against self incrimination.”

“Tell the truth before the senators affected will have you assassinated.”

Later, Sen. Santiago told a swarm of reporters that Napoles was “not the most guilty…[the] most guilty is a group of public officials, either senators or cabinet members or both.”

When a blogger asked the senator a question, Santiago immediately fired off a rapid set of questions:

Ang blogger ba may hanapbuhay ba o wala? Does anyone pay you people? You have to have advertisers, right?

My take on Sen. Miriam. She might be temperamental, erratic, even hysterical, but being obnoxious is a gift and a powerful weapon that has its uses. The Senate will never be the same without her.