The year 2013 slammed us with storm surges – both meteorological and political.

These storm surges are likely to re-occur this year. The latter with possibly higher intensity given the approaching 2016 presidential polls.

Before I continue, I’d like to apologize to all of you for not updating as often as I did in the past. My job as a foreign correspondent – which helps sustain this blog financially – became more hectic this year as the conflict between China and the Philippines over the South China Sea heated up.

Alan and I would like to greet you all a Happy New Year, since being happy is a state of mind – totally independent of the state of the country we are in.

And I hope at least one of your wishes come true this year.

I think I’m going to be pretty busy this month (more on this below) so I will be posting stories in short segments instead of entire lengthy pieces in one blow.

I am currently working on several issues. One is on Manny Pacquiao (thanks to another tip from Yvonne). Another is on the shockingly high electric rate increase. Still another is what I recently learned from various security experts regarding China and Japan. As well as post-Typhoon Haiyan and my recent trip to Europe.

I actually have plenty of pending stories. Sigh.

I will post them one at a time – as my time permits. Please be patient with me.

It seems I have a rapidly filling plate as far as January’s concerned. I’ve been invited to attend a security conference in Tokyo, as well as to give a talk on blogging as part of this year’s celebration of the 1986 Edsa People Power. And to write a short piece on impunity for the magazine of this year’s FOCAP Prospects Forum which will be held this January 24 under the direction of Focap President Jason Gutierrez of Agence France Presse. And did I mention my deadline for the piece is this Monday? Yikes.

In any case, this year will be a very exciting year for the Philippines and we will all have front seats.

President Benigno Aquino III will be winding up his term while his hopeful successors will be revving up efforts to replace him. And some very important people who are now in detention will be putting their best efforts to back the potential winner.

By the way, while covering a conference on China and its maritime conflicts in the East and South China Seas last month, I finally met someone for the very first time – Supreme Court Associate Justice Antonio Carpio, who I was accused of being in cahoots with during the impeachment trial of Supreme Court Chief Justice Renato Corona.

I prefaced my greeting to him by saying – “Hello, Sir, I have been wanting to meet you. I’m supposed to be your Girl Friday.”

His face instantly crinkled into a grin and his eyes disappeared in slits.

I asked him to pose with me for a souvenir photo: 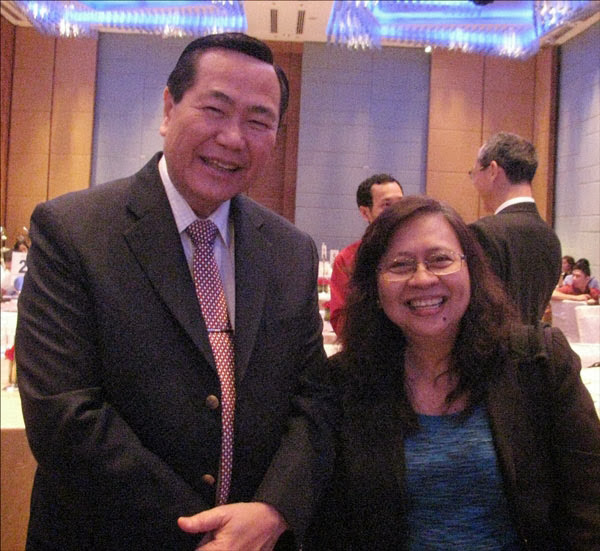 Then I asked Justice Carpio to meet other journalists present so the latter could be my witnesses that this was my first-ever meeting with him. The other journalists were my former Manila Chronicle editor Amando Doronila (whom I had not seen for ages) and Teddyboy Locsin (whom I also met for the first time).

Justice Carpio was present in the conference (held by the Angara Centre of former Senator Edgardo Angara) because he is keenly following developments in the South China Sea conflict. He was the ponente of the Supreme Court decision which declared as constitutional the Philippine archipelagic baseline law, which included the Kalayaan Island group as part of a regime of islands.

The next person I’d love to meet is the legendary “small lady” who has been intentionally identified as me by some people passing themselves off as journalists.

To refresh your memory, please see –

I become part of the Corona story

Ninez seems to know better than me where my body was

By the way, @baycas asked me to post the following links on the official report on the blast at the upscale Serendra apartments “for closure”.

He couldn’t post them himself because I placed a cut-off date for posting on stories so as to prevent spammers from continuously posting links to spam sites on much earlier stories. This caused my website to crash before.

Kroll Advisory Solutions report – you can download them by clicking on the links below:

You can read my original story on the Serendra blast by clicking here. Please post any comments here, not on the original story, because the Comments Section is already closed there.