Millions of Filipinos spent today, January 9, struggling through crushing crowds for a chance to touch, or even just glimpse the Black Nazarene as it was paraded around Manila.

But for detained businesswoman and accused huckster Janet Lim Napoles, getting close to the icon was no problem. It was regularly and personally brought to her mansion by its priest-custodian, Monsignor Josefino Ramirez.

Just think, my hubby Alan told me, of the fondling opportunities Napoles had with the Black Nazarene. She totally had her way with the icon.

And yet, instead of criticizing this gross favoritism extended to the accused con artist, who reportedly helped herself to billions of the people’s money, the Catholic clergy has chosen to stay silent, with some church officials even defending the actions of their fellow prelate, Msgr Ramirez.

A commenter going by the name “Songstress” has written that it was a replica of the Nazarene that was brought to Napoles’ mansion. A replica that Napoles herself commissioned.

I based my article on the affidavit of Napoles’ nephew-aide Benhur Luy that it was the real Nazarene that was trundled to Napoles. I suggest Songstress, assuming she has any evidence at all, get in touch with him.

By the way, no Church official has ever come out saying it was a replica. Plus, when you watch this ABS-CBN interview with Bishop Antonio Tobias, it’s clear that it was the real icon they were talking about. I clipped a portion of Bishop Tobias’ interview. You can watch it yourself below:

As for the commenter named “John S” who insinuates that I am getting money from the Gates Foundation, the World Health Organization and pro-abortion groups to sustain this blog and attack the Church, I am not. Get a life. But before that, get a real name. Don’t hide behind anonymous accounts. Only cowardly trolls with nothing to say do that.

When I first heard this news, I could not believe it. I held off writing about it and tried contacting Msgr Ramirez for weeks last year. Finally, I was able to contact the very place he was staying in. I was told he was not available. I left word that I wanted to speak with him. He never got in touch with me.

Instead, he opted to issue a written statement explaining why Napoles deserved to have the Black Nazarene brought to her personally. He said Napoles’ mother,

“Magdalena Luy Lim has always supported our apostolate for the poor most especially the Pantawid Gutom Feeding for the street people and malnourished children both in Binondo (1992-2004) and Quiapo (2004-2007) Parishes. When I was transferred to Divine Mercy Shrine in Mandaluyong City in 2007 she also helped our program for the elderly and our prison ministry in New Bilibid Prison.”

Apparently, he had a regular stipend from Napoles: 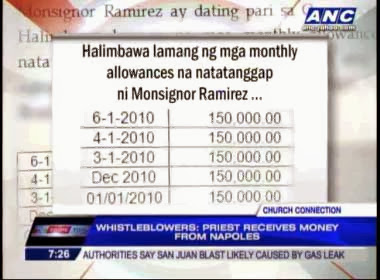 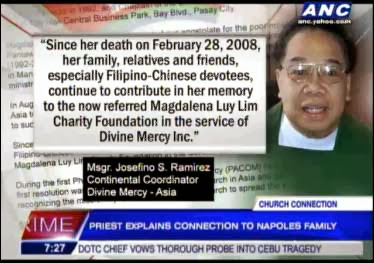 The Monsignor’s statement is very clear –

“Since her death on February 28, 2008, her family, relatives and friends, especially Filipino-Chinese devotees, continue to contribute in her memory to the now referred Magdalena Luy Lim Charity Foundation in the Service of Divine Mercy Inc.”

Sounds quite commendable, right? Napoles and her family ran a charity foundation for the poor, therefore she was entitled to a house call by the Black Nazarene.

Except for one problem: the Monsignor told the Securities and Exchange Commission – the foundation was never operational.

♦The incorporation papers of Magdalena Luy Limchu Charity Foundation in the Service of Divine Mercy, Inc. named Monsignor Ramirez as the “president/chairman” and Janet Lim Napoles as the treasurer.

♦It was registered with the SEC on March 4, 2011 or over two years after the death of Napoles’ mother.The charitable foundation’s primary purpose was to provide scholarships to the poor, particularly those wanted to become priests or nuns; provide medical care and support for retired religious; and provide assistance to poorest of the poor especially the children and elderly.

♦A 2011 financial statement reported that the foundation had assets of P1 million of which P879,305 was in cash.

♦But the following year 2012, Monsignor Josefino Ramirez signed an “affidavit of non-operation” and this was submitted to the SEC. He said under oath that the foundation was never operational since it began on March 4, 2011.

Here’s the first part of his affidavit: 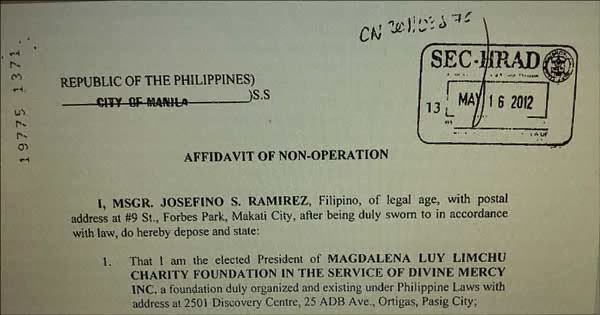 And here’s the second part: 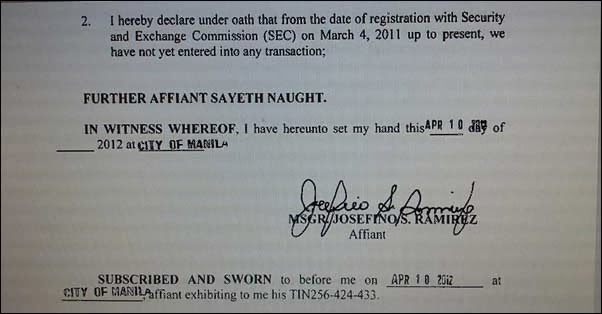 If that is the case, where was all that in-flow of money to the Magdalena Luy Lim Charity Foundation going if the foundation was not operational?

For starters, where did its million pesos in cash go?

Just FYI, Monsignor Ramirez is the same priest who issued a signed affidavit attesting that whistleblower Benhur Luy was never ordered kidnapped and kept against his will in a safehouse full of priests by the Napoles siblings – the same place used to house visiting and retired priests.

Ramirez is the same priest who told the SEC that the charity foundation he chaired and of which Napoles was the treasurer was never operational.

The Nazarene home visits to Napoles underscore the deep need for reform inside the Catholic Church. The Church has drummed into every Catholic that everyone is equal in the eyes of the Lord. Except that some might be more equal than others.

Prayers in the Storm