Privatize the power industry and electricity rates will go down. This was the promise made in 2001 by then President Gloria Macapagal  and Congress when they lobbied for the passing of the Electric Power Industry Reform Act (EPIRA).

The act was passed and today, 13 years later, that promise remains unfulfilled. In fact, the exact opposite has happened. Far from decreasing, rates have increased. Customers of the biggest retail provider, Meralco, are staggering under the highest electric rates ever in the country’s history.

This is something for us to keep in mind today as petitioners against the power rate increase face the Manila Electric Co. in a preliminary conference ordered by the Supreme Court, a week before the oral arguments there.

I clipped it because two things caught my eye about this ad:

First, it promised that if the law is passed, electric rates would go down.

You can read for yourself this full page ad. I had to take a photo of it in sections: 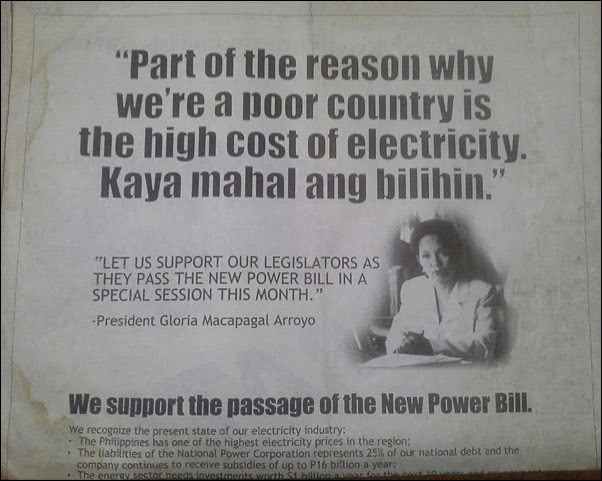 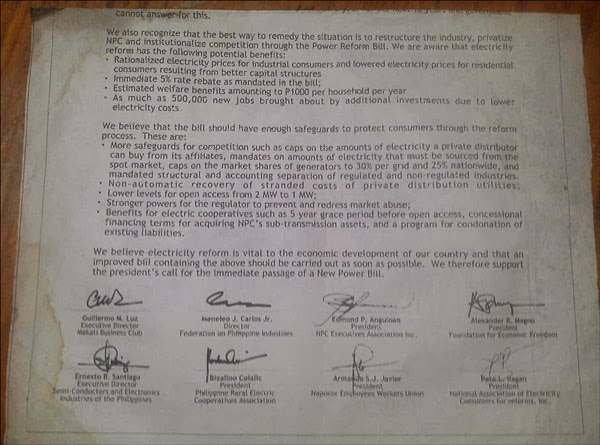 And here’s a closer look of the promises made in exchange for the EPIRA law:

Mrs Arroyo and House Speaker Feliciano Belmonte cannot escape the responsibility of making EPIRA right and fulfilling its broken promises. Belmonte was also  Speaker of the House when the EPIRA law was passed. And Arroyo is now in Congress.

I wonder if, like millions of “ordinary” Filipinos, Arroyo and Belmonte regularly worry about how to pay THEIR monthly electricity bills. What do you think?

At any rate, the least they can collectively do is drastically amend the EPIRA law ASAP, so it benefits customers and not just the power industry players.

Interestingly, among those who petitioned the Supreme Court to freeze Meralco’s recent power rate hike is Pete Ilgan, president of The National Association of Electricity Consumers for Reforms (NASECORE).

Pete Ilagan fully endorsed the passage of the EPIRA Law in 2001 and allowed his name and signature to appear in the same ad. He owes the public an explanation and he has to help make EPIRA right.

Besides Pete Ilagan, the following also have to help make things right: