PICK OF THE DAY –  How did celebrated Hollywood actor Robert de Niro slip past the airport reporters in Manila?

I’ve uploaded a video I took at the press launch, of Robert de Niro answering a question. It’s at the bottom of this piece. 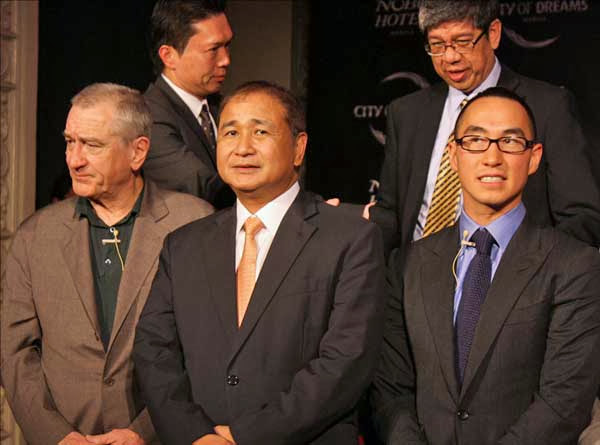 Or the celebrity watchers?

It was all I could do not to gush when I saw one of my favorite actors in the flesh.

He looked and acted just like in his movies. He could say something without even saying anything.

He had a face that apparently had not been touched by botox or by surgery because all the wrinkles and lines were there.

He popped in Manila to help in the launch of the Nobu Hotel which he co-owns, along with Japanese chef Nobu Matsuhisa.

A Nobu resto inside a Nobu hotel will be opening sometime in the third quarter in Manila – at the height of the typhoon season.

Does this mean we are REALLY becoming progressive? We are being noticed in the world?

I just hope all these developments benefit the poverty-stricken majority.

Sorry, I’m rambling. Got a deadline about this.

I just wanted to share with you guys my photo.

Now, I hope next time the Robert de Niro will bring along Keanu Reeves.

That will really make my day.

Ooops. My mistake. It was Al Pacino, not Robert de Niro, who appeared in Devil’s Advocate. He did appear in the Godfather as the young Corleone.

One of his scary villain roles is Cape Fear.

But I still want Keanu Reeves to come over :)