Janet Lim Napoles is indeed a very powerful and well-connected woman. So powerful, she was able to stop the Senate Blue Ribbon Committee from investigating her not just once but twice.

The first time was in 2006 and is well documented by various media outlets.

The Napoles pork scandal may have lifted the veil on why in a sea of poverty, a few Filipinos are super-wealthy.

If true, today’s testimony of Ruby Tuason is a shocking tale of greed.  It calls to mind what Mario Puzo in The Godfather wrote paraphrasing Honoré de Balzac  – that “behind every great fortune there is a crime.”

The pork suspect-turned-whistleblower narrated today under oath how Napoles tried to persuade her to use her connections to stop Gordon’s 2008-2009 investigation:

“I was in the States at that time. She (Janet Lim Napoles) kept on bugging me to come back to help her. I said I can’t.”

But apparently, Napoles found a way without Tuason’s help. It turned out, she no longer needed Tuason.

And Napoles continued to corner  senators’ pork in bigger and bigger amounts, until she made the mistake of quarreling with her assistant Benhur Luy and forcing him to go on a “spiritual retreat” – which Luy claimed was another word for kidnapping.

Just to put my narration in context, let me go back to 2006 when the Senate Committee on Agriculture and the Senate Blue Ribbon Committee conducted a joint investigation of the fertilizer fund scam of Agriculture Undersecretary Jocelyn “Joc-Joc” Bolante.

According to Senate Agriculture Committee chair Ramon “Jun” Magsaysay, Janet Lim Napoles was about to testify on her part in the scam when her appearance was overtaken by then President Gloria Macapagal-Arroyo’s order barring all government officials under the executive department from attending congressional probes without Arroyo’s consent. Magsaysay was quoted by radio station DZMM as saying that

“She (Janet Lim Napoles) was not summoned to the first five hearings but on the 6th one, which was supposed to be on February 25, (2006), na kasama siya, walang dumating because of Executive Order 464 from Malacañang.”

It would take another two years before the Senate would investigate the fertilizer scam once more. Shortly before Christmas of 2008, Senator Richard Gordon gave Janet Lim Napoles a nasty Christmas gift. Gordon issued the following press release saying he had issued a subpoena against Janet Lim Napoles, the government’s second largest supplier of fertilizer on record. 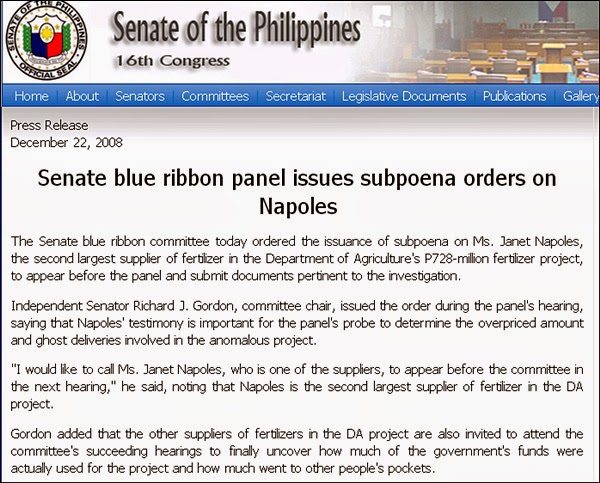 In January, Senator Gordon who is a brilliant legislator and outstanding manager, issued another press release saying, “foundations were used to launder money” in the fertilizer fund scam. Gordon was right on the money. 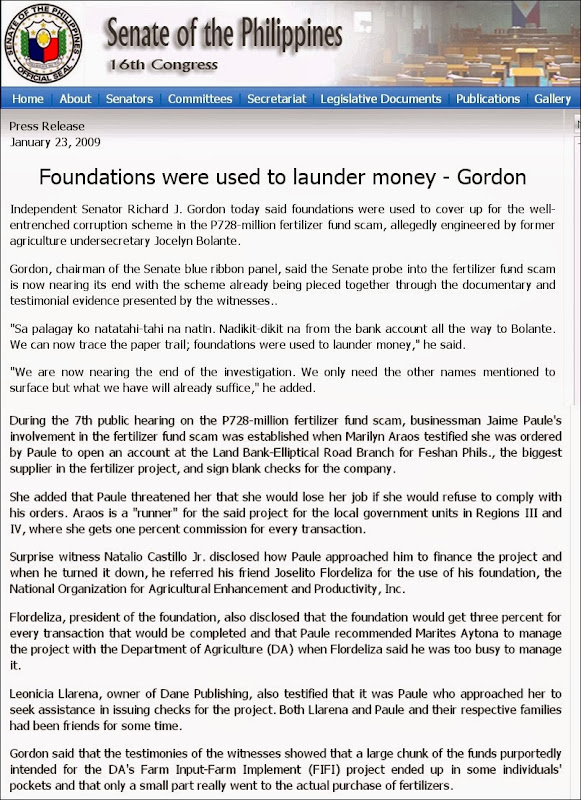 The next month, however, Gordon suddenly dropped his investigation of Janet Lim Napoles. Here is his press release to that effect: 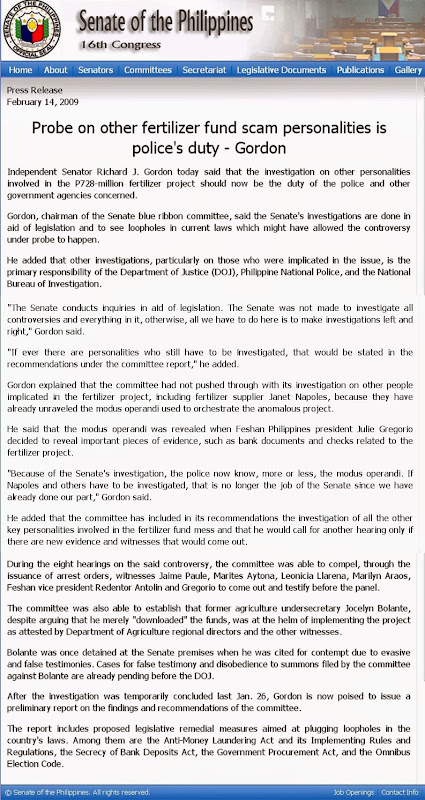 After the Napoles scandal broke out last year, former Senator Gordon (now the chairman of the Philippine Red Cross) told GMA News in a text message that his committee’s “principal focus (was) Bolante and other big fish.”

“At the time, we had a good lead against all conspirators specifically Bolante and the others, which was our mandate. If you look at our report, we said the Ombudsman can continue with the rest of the investigation. That is what they are supposed to do,” the former senator said.

I couldn’t buy that explanation and I thought there was something deeper because from what I personally know talking to him all these years, Gordon is a very smart man. Obviously, everybody knows by now that Napoles is a far bigger fish than Bolante. Did Gordon know it at that time?

I tried phoning Gordon several times to find out but his two mobile phones just kept on ringing.

Today’s Senate Blue Ribbon Committee hearing under Senator TG Guingona breaks one of those unwritten rules in Congress. And this is – you do not rat on your own colleagues. 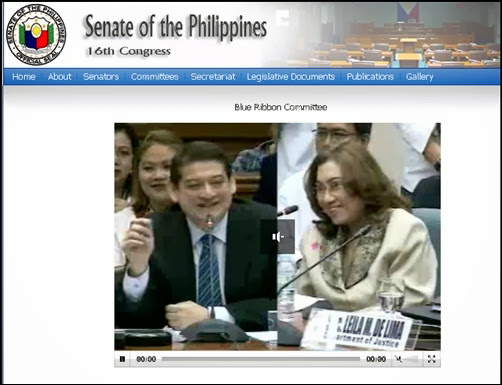 It is also an example of life’s irony – that the woman who could do serious political damage to allies of ex-President Gloria Macapagal-Arroyo is a distant relative of her husband.

Today’s whistleblower, Ruby Tuason, said she delivered commissions to both Enrile and Estrada at that time through their aides. Both senators have denied this saying Ruby is lying to save her own skin.

Can the Senate really be THIS CORRUPT? I don’t want to prejudge the Napoles case. But two things have been established by the unfolding scandal:

First, it’s fun to be a Senator and a senator’s aide. You are in the highest circles of power and wealth. It can make you giddy.

And second, it’s financially rewarding to be well-connected to senators and other top government officials.

The two videos below say it all. You might have seen both in the past but watch it again in the context of what the nation now knows about the Napoles pork scam. Please note though that the music is gone in both videos because YouTube said these were copyright material. Er, wasn’t it the Senate that helped pass the copyright law?

If Napoles did steal tax money, then we helped finance her daughter’s lavish 21st birthday party.

If Napoles did steal tax money with some senators’ knowledge, then we now know why the senators in the video below were very happy celebrating the birthday of Gigi Reyes, Enrile’s aide-lover (according to Senator Miriam Santiago).

Of course, because you as a taxpayer allegedly paid for both celebrations, you probably won’t be as happy.