For years, my hubby Alan could not update his satirical site because it was so tedious and mind-bending, using Dreamweaver.

But now, thanks to Drupal programmer Jeriel Lopez, Alan may soon be able to do regular updates.

Thank you, BenCy (Ruben Canlas Jr.), for recommending Jeriel to us.

Here’s the first update – an exclusive interview with two bacteria.

Because they felt so grossly offended by certain news reports, two of them broke an eons-old code of silence and disdained to be interviewed by Alan.

But because they both refused to be photographed, Alan had to call on artist Vincent Trinidad to do a kind of court sketch on one of the interviewees. We thank Vincent Trinidad for his rapid response. 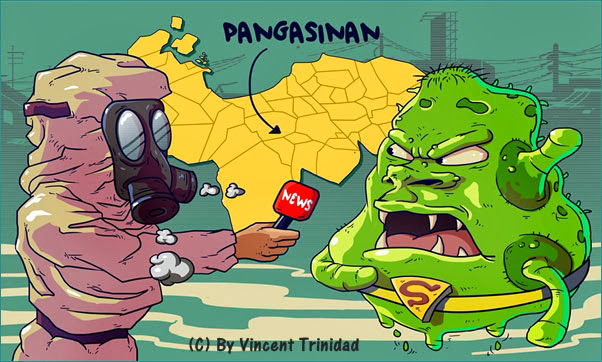 Flesh-eating bacteria yesterday denied they were invading the Philippines, dismissing news reports of such an attack as “a stupid hoax.”

In an exclusive interview conducted via microscope, two of the organisms — one of which identified itself as Sid Bafarges-Bacterium and the other as “just Duane” — scoffed at the sensationalist reports.

“Why would we invade the Philippines…what was that province again? Why would we go there? Is there something immunologically delicious there?”, Bafarges-Bacterium asked.

Early this week, a report by a TV network claimed an outbreak in Pangasinan province of the dreaded necrotizing fasciitis, a rare bacterial infection that destroys skin and muscle tissue. The story was based on a reporter’s interview of just two people with alleged “mysterious” skin ailments. To emphasize the medical seriousness of the report, the reporter wore a mask and what looked like a protective suit.