It was an offer that China thought the Philippines could not refuse. 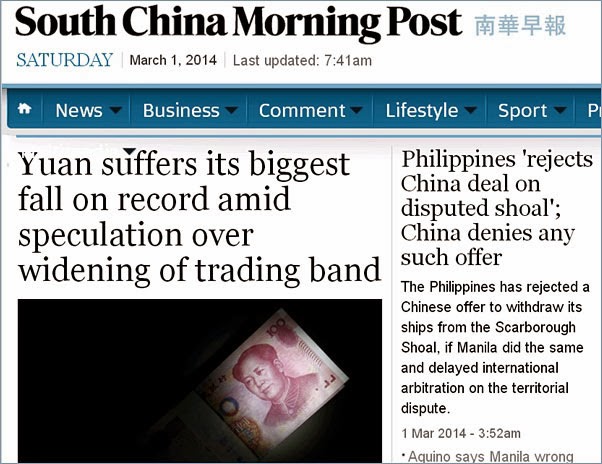 My sources knowledgeable with the offer said China was not even asking the Philippines to drop its filed arbitration case before the International Tribunal on the Law of the Sea. The only thing it asked was – miss the court-set deadline. That was all.

And in exchange, Chinese ships would stop harassing Filipino fishermen off Scarborough Shoal. Investments from Chinese state-owned banks and enterprises would once more enter the country. It would be the Golden Age of Chinese-Philippines relations all over again.

It would be lovelier the second time around.

The offer was actually discussed by President Benigno Aquino III in a cabinet meeting in January.

It took some time for Aquino to tell Beijing exactly what he thought of the offer. But when Aquino’s reply finally came, it was devastating – and splashed around the world, courtesy of a one-on-one interview with the New York Times.

But my sources stressed that the NYT interview was “mainly” directed at Manila’s long silent international allies. As Aquino jokingly said in one of his speeches afterward, the allies had reassured they were “behind” the Philippine move to resolve the South China Sea dispute through arbitration. But the problem was, no one was “beside” the Philippines in that effort.

Since the NYT interview came out, various officials of the United States have spoken out, questioning China’s Nine-Dash Line. The European Union has also spoken out, backing the use of the rule of law in resolving conflicts between nations.

Due to space constraints, a portion of my interview with former Congressman Roilo Golez had to be dropped. Here it is:

“Even If they withdraw now, they can always come back tomorrow, next month, just like what they did during the initial days of the standoff in Scarborough Shoal in April 2012. Despite an agreement that there would be mutual withdrawal, we withdrew but they stayed, Golez pointed out.”

Here is a portion of my story published today in South China Morning Post. Along with Beijing’s reply, courtesy of SCMP’s Teddy Ng.

Raissa Robles in Manila and Teddy Ng in Beijing

Chinese side reportedly offered to withdraw from Scarborough Shoal if Manila did not file document on dispute; Beijing denies any offer

The Philippines has rejected a Chinese offer to withdraw its ships from the Scarborough Shoal, if Manila did the same and delayed international arbitration on the territorial dispute.

Citing a “very reliable source”, Golez said: “The carrot is that there’s going to be mutual withdrawal [of ships off Scarborough Shoal] provided the Philippines will not file the memorial [a “memorandum” setting out the Philippines’ position on the dispute] on March 30.”

Another source said the offer had been made in January.

In Beijing, foreign ministry spokesman Qin Gang rejected claims that such a proposal had been made regarding Scarborough Shoal, known in China as Huangyan Island.

“China’s determination of upholding territorial sovereignty and integrity is unshakeable. We will not do any trade with our territory and maritime rights and interest,” Qin said.

“The Philippines side wants to file arbitration against China on the issue. We are opposed to that and we will never accept that. Our position has not change.”

According to Golez, Beijing was not asking Manila to scrap the arbitration case altogether, but that they postpone filing it until after the March 30 deadline set by the International Tribunal for the Law of the Sea (ITLOS).

Lauro Baja, a retired Philippine diplomat and former president of the United Nations Security Council, said that “missing the deadline will weaken our case because it means we are not ready. The [public] perception will be negative”.

Two Philippine sources familiar with China’s offer, who spoke on condition of anonymity, said that President Benigno Aquino had discussed the proposal, which included other incentives as well as the withdrawal, with his cabinet in January.

While Aquino has not publicly acknowledged the offer, the sources pointed to the president’s February 4 interview withThe New York Times as “partly” a response to the proposed deal.

“If we say yes to something we believe is wrong now, what guarantee is there that the wrong will not be further exacerbated down the line?” he told the newspaper. He later added: “At what point do you say, ‘Enough is enough’? Well, the world has to say it – remember that the Sudetenland was given in an attempt to appease Hitler to prevent world war two.”

To read the rest of the article, please click on this link.