A passenger on board the plane that was circling over the supply ship delivering provisions to Ayungin Shoal got the text message below on his Nokia phone while in that area: 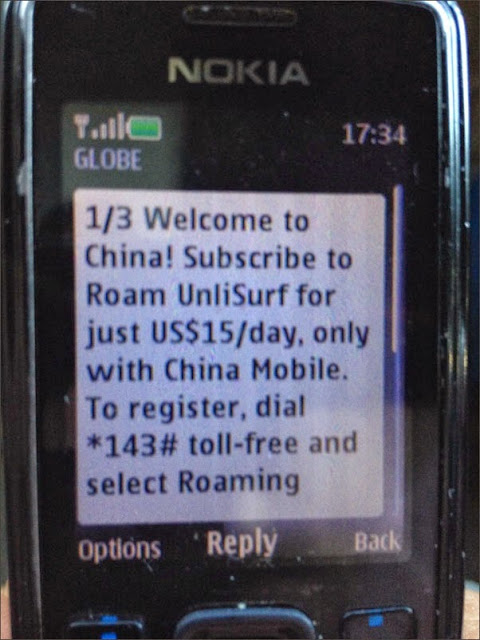 The Philippines is asserting sovereignty over Ayungin Shoal and has grounded an old ship, BRP Sierra Madre, there. Ayungin is within the Philippine exclusive economic zone.

Does the message mean that insofar as the Philippine telecom carrier Globe is concerned, the Ayungin area is indeed Chinese territory? Or does this mean Globe has no signal there but China Mobile’s signal extends all the way to that area?

I am eager to hear Globe’s explanation on this matter. I phoned the Globe spokeswoman just now but she was not picking up. I know. It’s a Sunday. Most people – except journalists – don’t work on Sunday.

All along I thought you had to activate roaming before you can get roaming.

I asked another person who was with the same passenger about the Globe text message. He told me there were actually three messages sent to the Nokia phone that was carrying a Globe SIM card. The first message is what you see above. The second message details the roaming rates. And the third message says – “Enjoy your stay.”

I wonder if the reporters accompanying the supply ship also got the same text message.