The multi-billion pesos corruption scandal was a Napoles family affair, documents from the Securities and Exchange Commission (SEC) show. 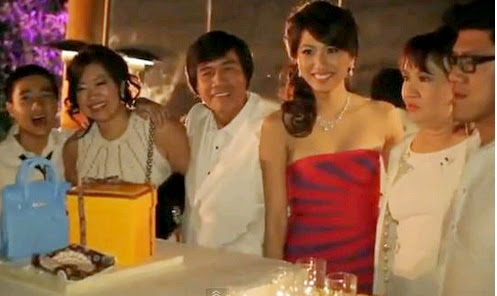 A family of bandits? You would never think that of this happy, happy family celebrating their daughter Jeane Catherine’s coming out party two years ago.  In the picture is Jo Christine Napoles (2nd from L), beside father Jaime, Jeane (in red) and the self-confessed Queen of Pork, Janet Lim Napoles.

Janet Napoles’ husband Jaime (nicknamed Jimmy) and her luxury brand and Hollywood-loving daughter Jeane Catherine were not included in the charge sheets. 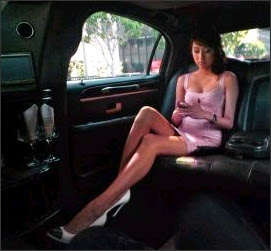 However, a close examination of the financial documents filed by Napoles’ flagship company JLN Corporation show rock solid grounds for charging father and daughter, Jimmy and Jeane. In fact, for charging the entire Napoles family of being co-conspirators in the plunder cases filed against the three senators.

The Ombudsman only indicted Jo Christine and James Christopher Napoles for “working for Napoles and (because they) served as officers of her NGOs which were selected and endorsed by Senator Enrile to implement his projects.”

But they were not indicted for their role inside JLN Corporation which was one of the mechanisms used to launder the pork.

Even under the Anti-Money Laundering Law, the Napoles family can collectively be charged because this law states that “if the offender is a corporation, association, partnership or any juridical person, the penalty shall be imposed upon the responsible officers, as the case may be, who participated in the commission of the crime or who shall have knowingly permitted or failed to prevent its commission.”

One of the “unlawful activities” punished by this law is theft of public money. The penalty ranges from seven to 14 years in jail plus a fine of “not less than P3 million but not more than twice the value” of the stolen loot.

But the Ombudsman appears intent on prosecuting the senators and their co-conspirators for the more serious crime of plunder which carries a life term.  For instance, in indicting Enrile, together with Janet Lim Napoles and two of her children, the Ombudsman said that “probable cause for plunder exists.”

However, Enrile – in his counter-affidavit submitted to the Ombudsman – appears willing to let Janet Lim Napoles take the rap without him. The Ombudsman quoted Enrile as saying that “it was Napoles and her cohorts ‘who persuaded and influenced the implementing agencies to violate their duties and functions’ ” without his participation.

An examination of the bank records and transactions of JLN might reveal a lot about the illicit transactions.

When the con was unraveling last year, Janet Lim Napoles started shuffling a lot of papers.

For instance, the financial documents filed by JLN to the SEC showed that something curious happened inside the JLN company that coincided with the period when Benhur Luy was detained by Napoles and her brother Reynald.

In the plunder charges it filed, the Ombudsman explained that Senators Enrile, Estrada and Revilla received kickbacks from Napoles from 2004 to 2010. The source of money was the pork barrel of the three senators. In other words, our tax money. This money was allegedly diverted to bank accounts of three Napoles-held corporations: JO-CHRIS Trading, the flagship company JLN Corporation and JLCN Global Properties Development Corporation.

The Anti-Money Money laundering Council can easily look at the cash going in and out of JLN’s corporate bank account. Do the fund flows reflect the expenses and income of the family “trading” business? Or do these indicate a serious case of money-laundering?

If the Ombudsman charge is correct, the massive fund flows in and out of JLN’s bank account will not be reflective of the modest “trading” business of the Napoles family.

If the Ombudsman charge is correct, JLN corporation and its board of directors can be held liable for massive money laundering.

Before I go on, I’d like to comment on what Janet Lim Napoles allegedly wrote in her unsigned affidavit.

She claimed that she never knew that what she was doing was illegal. On the contrary, her fraudulent transactions were “legitimate and righteous.” Janet Lim Napoles allegedly wrote:

“Honorable Ombudsman, please understand my situation. I am a simple person who wanted to earn for my family. As a person who is only a high school graduate, I then sincerely believe that what I am doing is a legitimate and righteous business.”

“Had I known that giving commission is illegal, I would have not done such thing. I was working in the premise that since I was delivering fully and in some instances more than what I should that it would even things out.”

I leave it to the reader to decide whether Janet Lim Napoles is lying or telling the truth. The modus operandi she used in the pork barrel scam was the same one she used in the earlier fertilizer scam – government money was allotted for buying fertilizer; diverted through her trading company, which either bought low quality fertilizer or made ghost deliveries; and commissions were paid to the government officials involved.

In 2006 and 2009, Janet Lim Napoles was summoned before a Senate investigation on the fertilizer scam. She managed to dodge appearing twice. It’s probably safe to presume that as early as 2006, she knew she was engaged in a fraudulent activity. You can read about this more by clicking here.

To claim that she is “only a simple person…only a high school graduate” is to insult all honest Filipinos who never went to college.

Honesty has nothing to do with educational attainment. Our most celebrated crooks are among the smartest and the most educated in the country.

Let me start from the beginning.

Janet Lim Napoles incorporated JLN in 1999 along with four others:

JLN told SEC its primary purpose was the “business of trading of goods such as marine supplies, and equipment, construction materials etc.”

The following year 2009, JLN filed a General Information Sheet (GIS) with the SEC showing three new corporate owners. Besides Janet Lim Napoles and Annabelle Luy , the rest of the shares were now owned by her two daughters Jo Christine and Jeane Catherine and her only son James Christopher. All three also sat in the corporate board.

In 2010, JLN filed another GIS with the SEC showing for the first time the entry of Janet Lim Napoles’ husband Jimmy into the corporate board. Jimmy Napoles assumed the chairmanship while Janet became the President. Jo Christine and James Christopher remained Treasurer and Secretary, respectively. While the fun-loving Jeane Catherine sat on the board without added responsibilities. By 2010, Janet and Jimmy owned 25% each of JLN; Jo Christine, James Christopher and Jeane Catherine, 15% each; and Benhur Luy’s sister Annabelle, 5%.

Recall that the Ombudsman charge sheets claimed that tax money was laundered through JLN Corporation from the years 2004 to 2010. Can the chairman of the board plead ignorance when the president of the board has already confessed to doing it? And what about the other board members?

Now here is where it gets very interesting and curious.

Recall that Benhur Luy was reportedly held against his will after a confrontation with Janet Lim Napoles on December 19, 2012. [NOTE: You can read about this through an eyewitness account of Merlina Sunas by clicking here.]

Through the efforts of his parents and his sister Annabelle, Benhur Luy was rescued by operatives of the National Bureau of Investigation on March 22, 2013. His family told authorities he knew a lot about the fertilizer fund scam.

Curiously, JLN Corporation submitted a GIS to the SEC on March 27, 2013 – or five days after Benhur Luy’s rescue by the NBI from Janet Lim Napoles’ control.

This new GIS dropped Benhur Luy’s sister Annabelle from the JLN board for the first time since JLN was incorporated. Annabelle was replaced by Janet Lim Napoles’ brother Jose Emmanuel Lim. Months later, Annabelle Luy would testify in court that Janet Lim Napoles and her brother Reynald illegally detained Benhur in order to pressure him into owning up to making pork deals with lawmakers behind Janet’s back.

As the news media started picking up Benhur Luy’s story, JLN Corporation suddenly filed an “amendment” at the SEC on May 15, 2013. The amended GIS retained Jaime Napoles as chairman but removed Janet, their children and Janet’s brother Jose Emmanuel Lim from the JLN board. The JLN board was reconstituted with the following directors:

However, on August 8, 2013 after the Philippine Daily Inquirer splashed Benhur Luy’s story on its front page, JLN Corporation again submitted a GIS to the SEC. The JLN Corporation no longer had Filemon Agustin, Andres Atan, Cheryl Jimenea, Peter Lavin and Anthony Dequina in the corporate board. The board had reverted control back to Janet and Jimmy Napoles, their three children Jo Christine, Jeane Catherine and James Christopher, together with Janet’s brother Jose Emmanuel.

It would be interesting for the Ombudsman to question Agustin, Atan, Jimenea, Lavin and Dequina about their sudden appointment and removal from JLN.

Did it have something to do with the public disclosure of the pork barrel scam?

In any case, JLN’s corporate records show that Napoles’ husband and three children can be charged for money laundering. 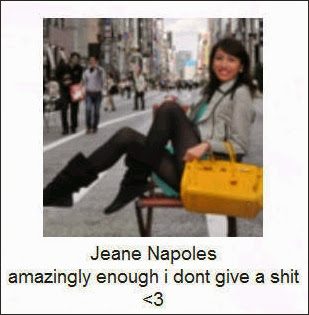 Jeane Catherine posted this on her Tumblr account when pics of her designers bags went viral on the Internet.