Philippine Vice-President Jejomar Binay and Interior and Local Governments Secretary Mar Roxas were spied on last year by the United States National Security Agency (NSA), according to the prestigious French newspaper Le Monde. The spying lasted for a month but Le Monde did not say which month.

Le Monde said it contacted both Binay and Roxas for comment but neither responded to the newspaper’s questions. I’d like to thank “Observer”, one of the commenters on this site, for alerting me to Le Monde’s May 8, 2014 piece entitled Révélations sur les écoutes sous-marines de la NSA. The newspaper is among the publications doing an extensive coverage of the leaks from former intelligence contractor Edward Snowden. 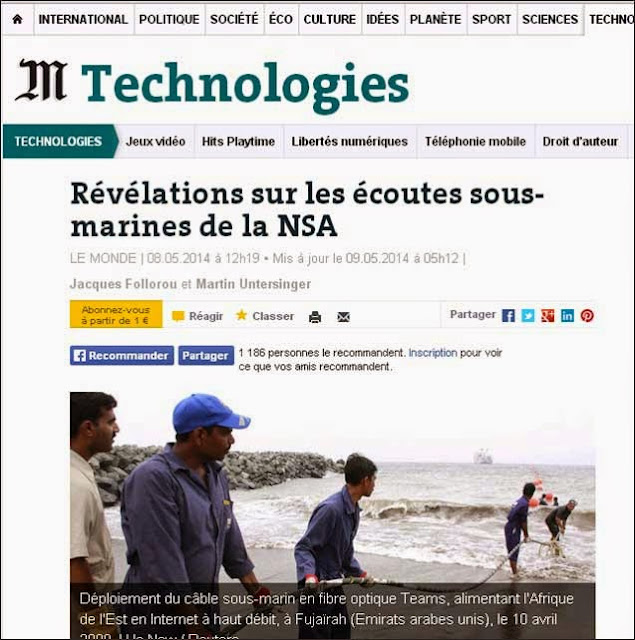 Interestingly, the article describes Binay as a “cacique“. In French, it means a very important person. In Spanish, it means a local political boss. In the Philippines, it means a rich oppressive hacendero.

As for Roxas, Le Monde made this observation: “As a senator he distinguished himself by his militant attitude against the signing of government procurement contracts with Chinese partners, especially in telecommunications.”

Le Monde writers Jacques Follorou and Martin Untersinger wondered why the two politicians had been targeted for spying. Their piece pointed out: “Nothing in the careers of these two men, who have not responded to questions from Le Monde, seems to threaten Washington. On the contrary, they seem to defend institutions built on a model that is very close to that of their former colonizer.”

Le Monde was perhaps not aware that both Binay and Roxas share a common ambition – to become president in 2016.

It is understandable that the US, which was then negotiating a long-term agreement on troops and equipment, would be curious to know more about the two presidential contenders. But to go to the extent of secretly monitoring them is not what one expects from a treaty ally.

That is also what German Prime Minister Angela Merkel thought when she found out that she was being spied upon, on orders of the US President Barack Obama.

Besides, all along the US has told the world that such spying is in aid of America’s war against terrorism.

I would like to thank a French-speaking Filipino who kindly translated for me what Le Monde published about Binay and Roxas. Below is the French text followed by his translation:

The addresses of two Philippine personalities appear on the NSA list. Jejomar Binay, Vice President of the Philippines and Manuel Roxas, Secretary of the Interior, are not well known for their anti-American positions. Elected in 2010 in the wake of the election of the Benigno Aquino as the head of the country, Jejomar Binay occupies an important place in the political landscape. This cacique who was for a long time Mayor of Makati, Manila’s business district, is a figure in the economic sphere. Manuel Roxas was a senator before occupying several posts as secretary including those of transportation and communication. He’s a former investment banker, the son of a senator and the grandson of a former Philippine president. As a senator he distinguished himself by his militant attitude against the signing of government procurement contracts with Chinese partners, especially in telecommunications. He was defeated by Jejomar Binay in the race for the Office of Vice-President in 2010.

Nothing in the careers of these two men, who have not responded to questions from Le Monde, seems to threaten Washington. On the contrary, they seem to defend institutions built on a model that is very close to that of their former colonizer. The two countries are bound by a defense agreement concluded in 1951. The trip in April to Manila of the American President Barack Obama is possible to reformulate this political and military alliance. The Republic of the Philippines is an important regional relay for the United States , a non-negligible ally that Washington is trying to keep in its sphere in the face of Chinese power.

Here is the link to the Le Monde article.

Last year, when Le Monde broke the news that the US NSA had been intercepting French phone traffic on “a massive scale”, the US Ambassador to Paris was summoned by the “shocked” French Prime minister Jean-Marc Ayrault, according to the British publication, The Guardian.

When Binay and Roxas dined with US President Barack Obama at the state dinner last month, it is reasonable to assume that they knew of the NSA intercepts of their most private phone calls or correspondences. Did they ask Obama about it?

Most probably not. but I’m curious to hear their side.

Plus, I would not mind if someone gave me the data that the NSA mined from their their “addresses.”