And how Bayan Muna justifies its use of pork

College student Pio Mijares was arrested on Independence Day for publicly calling President Benigno Aquino the “pork barrel king”, demanding his ouster and shouting that nothing has changed in the country.

I personally think Mijares is wrong in what he said. But I also think he has the constitutional right to say it.  The authorities over-reacted and could do even more damage to the body politic if they pursue the criminal cases they filed against Mijares.

He was charged with violating Article 153 of the Revised Penal Code. It punishes those who cause “tumultuous disturbance or interruption liable to cause disturbance” with two months to six years in jail and a P1,000 fine. This section further defines the crime as causing “any serious disturbance in a public place, office, or establishment.” A person is considered liable if he “shall interrupt or disturb public performances, functions or gatherings, or peaceful meetings.”

“Tumultuous” means “loud, deafening, thunderous or uproarious.” Can the sound of one voice be considered “tumultuous”? Can Mijares’ yelling be considered a “serious disturbance”?

According to our Revised Penal Code,

“The disturbance or interruption shall be deemed to be tumultuous if caused by more than three persons who are armed provided with means of violence.” [Underlining mine]

Based on this definition, Mijares’ shouting cannot be called “tumultuous.”

Now let’s see if Mijares all by himself even committed a crime. He can only be deemed to have violated Article 153 of our Penal Code (as claimed by the police) if in a public place he “shall make any outcry tending to incite rebellion or sedition or in such place shall display placards or emblems which provoke a disturbance of the public order.”

And he waved a banner that said:

“Oust P-Noy and Free Benito Tiamzon and all political prisoners and scrap all forms [of] pork! DAP, Ibasura.”

From these statements, we can surmise he is a left-wing activist who believes in communist leader Benito Tiamzon and wants all political prisoners released. But there is nothing illegal about that since the Anti-Subversion Law was repealed and belonging to a communist group is no longer a crime.

Although I believe Mijares’ statement is wrong, there is also nothing seditious about saying “Patalsikin ang Pork Barrel King!” because there are legal ways of ousting a president, for instance through impeachment.

The police are also trying to pin him with the charge of violating Article 148 or “direct assaults”. Seriously? One element of the crime is the use of “force or intimidation”, which the police said resulted in torn clothing.  Resisting arrest also falls under this crime. Punishment is up to four years in jail.

The police might still make a case out of this charge but the political repercussions could be serious.

Why Mijares’ case could have serious political repercussions

The message that the arrest and and criminal charges are giving is that if you heckle the President, he will have you jailed, instead of explaining to you why he disagrees with what you said.

The message it is giving is that Aquino has something to hide.

The very strong message it is giving is that you are not the boss. He is. And President Aquino did not really mean what he said when he said – “Kayo ang boss ko.” (You are the boss.)

I can even understand why Mijares was arrested and dragged away the moment he shouted. Aquino’s closed-in security wanted to make sure he was no security threat. 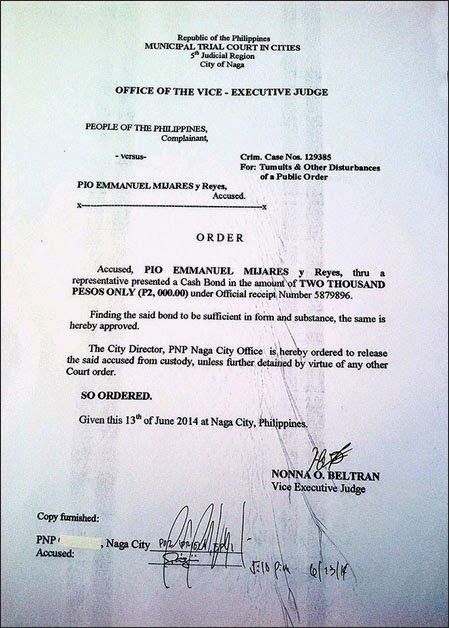 The news stories coming from Naga City didn’t say how President Aquino reacted to Mijares’ heckling. Or if he was even aware of it. If Aquino did hear Mijares interrupt him, he should have reacted with grace and calm.

Like what US President Barack Obama did when he was rudely interrupted. Obama even prevented his closed-in security from removing the heckler from the premises. Watch this video. The heckler comes on 24 minutes into Obama’s speech:

Another video that shows the heckler and the security detail trying to bring out someone can be watched by clicking on this link.

Aquino’s predecessor, President Gloria Macapagal-Arroyo, was also heckled. For shouting “Oust Gloria!”, nine activists were charged with the crime of “alarm and scandal” (Article 155 of the Revised Penal Code). It’s a lesser crime compared to what Mijares was charged with, but still a crime that carries a jail term.

Why Mijares is wrong

When Mijares shouted against the pork barrel and implied that this was a very bad thing, I wonder if he had thought the issue through and examined it from every angle.

For starters, is he aware that left-wing Congressmen like Teddy Casiño and Satur Ocampo also got multi-million pesos worth of pork barrel?

In contrast, Benigno Aquino never got pork while a senator. And yet there’s now a move to pin the scandal all on him, and to oust him.

The Development Acceleration Program (DAP) was baptized by Senator Jinggoy Estrada as “presidential pork.” But there’s a huge difference between the DAP and the legislators’ pork barrel which I will explain in a later piece.

On the militant congressmen’s pork, I remember Arroyo’s former national security adviser Norberto Gonzales railing against Ocampo and Casiño and accusing them of using their pork to further the cause of the communist New People’s Army. Gonzales never showed proof for his allegations but he was correct when he said that the Bayan Muna Party congressmen were also getting pork.

Both lawmakers have defended their pork saying everything went to their constituents and nothing to their pockets.

Still, how does Bayan Muna explain its stand now on pork?

I asked both of them how they reconciled their having received and used pork while they were congressmen to the current stand of their political party Bayan Muna to scrap all pork.

This is how Satur Ocampo explained the contradiction:

“When we got in Congress in 2001, we were opposed to pork. But then we realized we cannot do away with it. There was pressure from our constituents .

We wanted to remove the pork. What we were told by the leadership – hindi puwede yan, suntok sa buwan yan. [That won’t happen. That’s like punching the moon.]

So we designed guidelines. We will recommend projects only as identified as most needed in the area. For instance – farm-to-market roads, classrooms, medical facilities, day care centers.”

So, in that way pork is good, I asked Ocampo.

“Yes, yes, in fact you won’t see our names involved in any questionable allocation.”

So why do you need to abolish it, I asked further.

He said that due to the “disclosures of large scale misappropriations we went back to our original position.”

I asked Ocampo if he had ever heard of Napoles and other scams like hers. He said,

“Marming ganoon.  Actually we enjoyed the pork, we were only able to avail of the pork only up to about our first term. When we opposed GMA (President Gloria Macapagal-Arroyo), we got cut off from pork.”

”When Bayan Muna availed of PDAF (pork), we made clear to the beneficiaries that the funds used for our soft and hard projects were public money we return to them in the form of public facilities or services.”

I discussed the DAP (President Aquino’s Development Accelration Program) with Ocampo, but I will write that for later.

“Kami naman, we used it . Pero hindi kami pumasok sa mga schemes . [We did not enter into any shemes.]We didn’t deal with any broker. It was available to be tapped for our constituents, ginamit namin nang maayos [We used it properly].”

I asked Casiño if there was an inconsistency in their present demand to scrap all pork. He replied:

“Parang sa akin it was a compromise at that time. Government resources are there. Puwede namang gamitin nang tama.”

I told him that their experience in using pork showed that pork was good.

Casino surmised that from suppliers and contractors, the kickback to lawmakers was at least 10%.

He said he had never met nor heard of confessed pork barrel queen Janet Lim Napoles:

“Never ko yan na-encounter. Ang feeling ko, they didn’t try at all. Our reputation insulated us from offers.”

Casiño also gave me a link to his website explaining why Bayan Muna now wants to scrap all pork after using pork. It is entitled – Proper use by a few can’t compensate for plunder of the many (Or why, despite using it in the past, we want the pork barrel abolished)

In closing, I want to point out one curious thing about Mijares’ call. He wants President Aquino ousted. And who will benefit if Aquino is ousted, do you think? The next in line, of course.