A tearful Lani Mercado faced veteran entertainment writer Mario Dumaual to defend her husband from charges of grand theft of the people’s money.

With very little makeup, except for some eyeliner, the actress who is also now a lawmaker in Congress said:

I could not help but notice, though, the large gem winking on her right ear lobe as she moved her head expressively on cam. Were those real diamonds or just swarovskis? Look for yourself below: 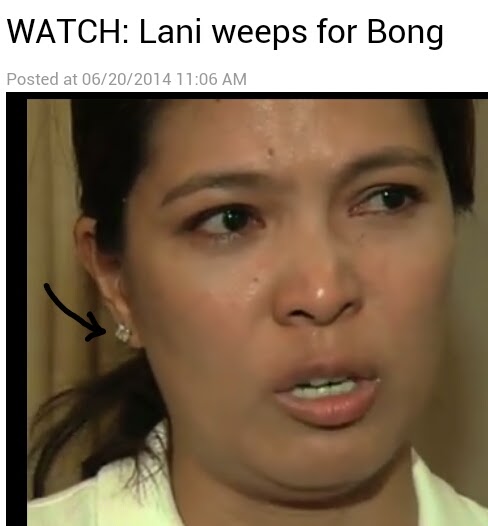 If they were real diamonds, what a jarring piece of jewelry to wear on such an occasion.

I was unsure, though, whether to write this, until I saw a piece on Lani Mercado and her apparent love for designer handbags. It’s entitled “Lani’s Luxury bags” by a blogger who calls herself Goldee Luxe.

“This made me me wonder what she likes to spend her money on so I did what any normal person would do?I googled her.

Like most women in this day and age, she is definitely into luxury bags. She has been seen carrying Chanel (at a party with Janet Lim Napoles, no less!) and Louis Vuitton bags.”

Click on this link to see the photos of Congresswoman Lani Mercado.

However, Senator Bong Revilla was arrested and detained on the charge that he stole P517 million of the pork barrel that was allotted to him so he could help the very poor directly.

Seeing that his declared net worth of P82M is much, much less than the P517 M he is accused of stealing, it is quite understandable that he and his entire family, including his young children, are being subjected by authorities to a lifestyle check.

Why subject minors to a lifestyle check? Isn’t that cruel, inhuman and stupid?

In this case, the minors are not being accused of committing the crime; only their father is. He may have stashed the loot using their names – in various bank accounts and various instruments such as insurance policies, bonds, condominium titles, etc.

You can read more about the charges against Senator Bong Revilla by clicking on this link.

I am posting below, the previous stories I have written about Sen. Bong Revilla, his father and the murder of his half-brother. Another half-brother is still in a regular jail cell awaiting trial while a half-sister remains missing, having fled abroad.

Is PNoy’s meeting with Sen. Bong Revilla like GMA’s phone call to Garci?