Old age and declining health are reasons the former Senate President Juan Ponce Enrile cited for the court to grant him bail.

The request was accompanied by a May 16, 2014 medical certificate from a Dr. Claver Ramos of Makati Medical Center.

Dr. Ramos, an internist specializing in nephrology listed a long list of ailments that the 90-year-old Enrile has:

Meanwhile, Enrile’s doctor is saying Enrile’s health would be greatly at risk if he were to be confined at the police custodial center all by himself. It has a single bed, a bath and shower, a ceiling fan and a small window. But it is much better than the bunkhouses built for the families of the Yolanda typhoon victims.

And how about Golden Acres?

I’d like to invite other doctors to explain what Enrile’s illnesses are in laymen’s terms and how serious these illnesses are.

The evidence out there, however, speaks louder than the doctor’s medical certificate.

Journalist Melo Acuña, my colleague at FOCAP (Foreign Correspondents Association of the Philippines), chanced upon Senator Enrile today at Hotel Intercon, and they chatted awhile.

Here is what Melo wrote on Facebook about Enrile:

“While waiting for the EU-MAG-TFD event at InterCon’s Bahia, I opted to have coffee at the Jeepney Coffeeshop and chanced upon Senator Juan Ponce-Enrile. Asked him of his bp, he said it’s 130/70 with a pulse rate of 96. He seemed relaxed.” 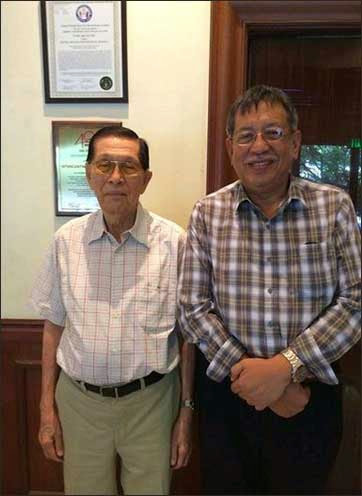 Only last November, Enrile delivered a 31-minute privilege speech on the floor of the Senate standing up, without a 24-hour nurse interrupting him to take his bp (blood pressure).

Besides, Enrile himself was strong enough for the grueling jobs of presiding over an impeachment court while personally writing his own memoirs – at least if you believe his own words.

“Writing my memoirs proved to be an emotional roller-coaster ride for me.”

And on the next page, he also wrote:

This means, Enrile himself believed at the time of his writing his memoirs that he was in good health. It would be interesting to ask Dr. Ramos how long Enrile has had those illnesses he enumerated.

Was it before 2012 when Enrile published his memoirs?

Finally, you can see how vigorous and healthy Enrile is by watching this video of his privilege speech delivered only last November: