Something is definitely happening to Hong Kong and its residents.

They want what you and I in the Philippines have – one vote per adult to elect who will lead them.

In the sticky heat of July and the sudden downpour, thousands have elected to march in the streets to tell Beijing what they want in no uncertain terms. Despite the threats. Despite the possible blow back on their careers and their future.

As of 10:08 PM today [Hong Kong and Manila time], July 1, 2014, the protest is still going on. You can watch it livestream by clicking on the YouTube video below: 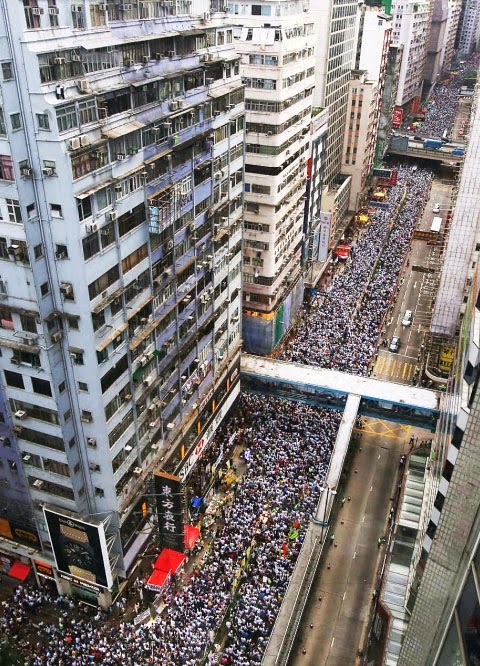 The size of this crowd reminds me of the protests after the August 21, 1983 assassination of Senator Benigno “Ninoy” Aquino Jr. up to the downfall of the dictator Ferdinand Marcos in 1986. Not even the protests that unseated President Joseph Estrada produced such numbers.

Which leads me to ask this question: Have Filipinos forgotten to be outraged?

I remember that during the presidency of Gloria Macapagal-Arroyo her national security adviser Norberto Gonzales kept telling the foreign press that she would not be toppled like Estrada because the outrage was no longer there. As evidence, Gonzales would point to the fact that the Left could hardly get a decent crowd together for their street protests. The number of rallyists out in the streets were simply pathetic.

But last year, Filipinos shocked themselves by suddenly coming together in tens of thousands at Manila’s Rizal Park to protest the theft of the people’s money by some elected officials. They demonstrated that the outrage was still there, though more controlled and tempered by sad experience.

For the people of Hong Kong, it is the beginning of a long, long journey. 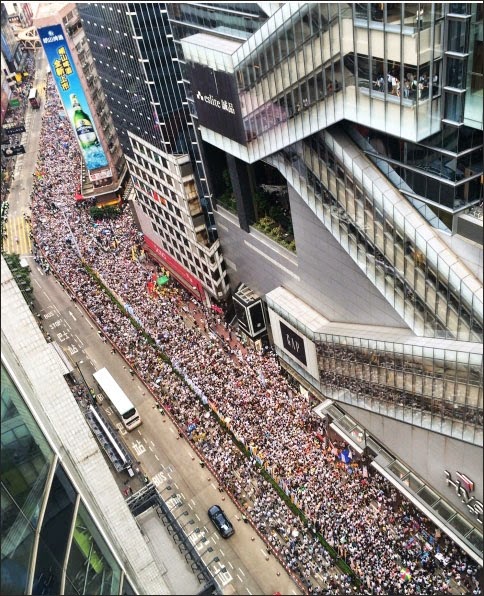 Many, many Filipinos wish you Godspeed and good luck, don’t lose hope, we are rooting for you.

Below is an excerpt from South China Morning Post on what’s happening in Hong Kong:

Johnson Yeung Ching-yin, convenor of the Civil Human Rights Front, said the city did not need to take orders from the “dictatorship thousands miles away”. “Tonight, [the young people] would kick off the prologue of the fight … our fate should be decided by the people, but not Leung Chun-ying, [development chief] Paul Chan Mo-po and the central government,” he said.

Civic Party barrister Tanya Chan, a former legislator and rally host, urged the police on duty tonight to show restraint. “We might look like standing on the opposite sides today, but afte rall, you are also Hongkongers,” she said. “What actions you take against the protesters tonight might affect the city’s future.”

The hosts also briefed the protesters on the principles of non-violent resistance, such as not hitting back and being friendly to police.

9.28pm: Civic Passion leader Wong Yeung-tat tells the Post: “We will start a rally outside Wanchai Methodist church after the tail has passed by. And we will see how the students sit-in goes and decide what are we going to do.”

The League of Social Democrats’ vice chairman Avery Ng Man-yuen says some League members will join the students’ protests, although the League will not stage a demonstration of its own tonight.

9.10pm. Chater Road is occupied. Hundreds of students are sitting in the road under the glare of spotlights, stretching back several hundred metres. It is unclear how long they will stay or whether police will move them on. The protest was organised by the Federation of Students and Scholarism and was billed as a practice run for Occupy Central.

Another loud hiss from the crowd as one of the rally organisers reads out the government’s statement on the march, which once again said public nomination would not be allowed – one of the key demands of protesters.

Police say they will take decisive action to ensure law and order and public peace are maintained. Senior superintendent of Police Public Relations Branch, Kong Man-Keung, said the force had not issued a notice of no objection in relation to the planned sit-in by students in Chater Road after the march.

He said such activities at night may be dangerous as people gather in dim light. He urged demonstrators to follow police instructions and take part in the rally peacefully, adding that media reporting the event should also be careful.

8.45pm: Protesters in Chater Road give out a loud hiss in unison after organisers reveal the official police turnout figure of 92,000. Official figures given by the police and protest organisers usually vary wildly as both sides attempt to score points with high or low turnout figures. Actual figures nornally fall somewhere between the two.

8.30pm: Civic Party barrister Alvin Yeung is briefing protesters on what to do and what rights they have if they are arrested.

Albert Ho Chun-yan of the Democratic Party says he has not seen such a large turnout since the rally in 2003. “It shows Hong Kong people demand real ‘one country, two systems,'” he says.

Meanwhile Apple Daily’s Facebook page says it has been under severe cyber attack since mid-afternoon. Their site first went down shortly before 3pm, recovered at 5.30pm, and crashed again at 7pm.

Officers say a 22-year-old man was arrested in Causeway Bay for vandalism when he threw a metal barrier at a bus.

8.05pm: Hundreds of protesters have gathered at Chater Road, where students have pledged to spend the night in rehearsal for Occupy Central. Police say they will give a press briefing at 8.15pm.

Hosts of the rally at Chater Road blasted the police for stationing police cars at Jardine’s Bazaar which blocked marchers from proceeding.

Singer Denis Ng led the protesters singing the cantonese version of “Do you hear the people sing?”

7.40pm: There are reports a convenor of the student activist group Scholarism, Joshua Wong Chi-fung was assaulted, leaving scratches on his face. Oscar Lai, a member of Scholarism who was alerted to the alleged incident, was unable to confirm the whereabouts and the condition of Wong.

7.37pm: The rally has lasted longer than even organisers expected. As the sky turns dark, street lamps are switched on in Victoria Park. “I have been a master of ceremonies for the march for 10 years,” said Lit Ming-wai, an organiser of the annual demonstration. “It is the first time for me to see people still waiting to leave Victoria Park when night falls.

Meanwhile, Cantopop singers Anthony Wong Yiu-ming and Denise Ho Wan-si, who have both come out as gay and been outspoken on many political issues in the past, are cheering for marchers in Causeway Bay near Sogo.

7.06pm: Avery Ng of the League of Social Democrats said chairman “Long Hair” Leung Kwok-hung wanted to join the march but was frustrated by his jail term.

“Treasure the chance you can to march today. Don’t let me see you exit and give up when you reach Wan Chai,” Ng urged fellow protesters

6.55pm: In its official response to the public procession today, the government says it respects residents’ freedom and right of expression and has always encouraged the public to express their views via legal channels and in a peaceful manner.

But in case of any contravention of the law and breach of public order, “law enforcement agencies will handle such a situation strictly in accordance with the law to ensure that law and order and public peace are maintained in Hong Kong”, a government statement said.

It reiterated that proposals on political development should be, legally, strictly in accordance with the Basic Law and relevant Interpretation and Decisions of the NPCSC.

The government is aware that a host of other public aspirations are expressed in today’s procession, it added, and will continue its endeavour to tackle various problems including those related to economic development, housing, poverty, ageing society and the environment, it added.

6.34pm: Crowds in Victoria Park are becoming increasingly angry at being hemmed in, with protesters again stopped from leaving. Shouts of ‘make way’ go up from demonstrators. When the MC on stage providing entertainment asks who voted in the unofficial Occupy Central poll a sea of hands shoots up.

6.29pm: Police warn march organiser, the Civil Human Rights Front, that they may take legal action for failing to heed police instructions. Wan Chai District Commander Leung Sai-kau says: “The organisers’ car that is leading the procession has been progressing very slowly and at times stopped We have repeatedly asked the organisers to keep moving but we were ignored.

“The police expressed extreme disappointment with the un-cooperative attitude of the organisers and may pursue legal liability in accordance with the law.”

Leung also rejects calls by the front to open up the entire Hennessy Road to accommodate the protesters, saying doing so could seriously affect emergency services or other road users.

6.15pm: Mainland shoppers are going about their business in the stores of Causeway Bay despite the hours-long protest outside. Annie Yen of Shanghai, who was looking at dresses on Hennessy Road, said she wasn’t fazed by the demonstrators, but opposed divisions between Hong Kong and China.

“Freedom is very important but I think we should unite together,” said the doctor, visiting the city for a short holiday and fearing a potential escalation in violence. “We shouldn’t do anything to separate from our big family of China,” she said. “War is not good. We shouldn’t have a war.”