I had not expected this.

I thought few would be interested in reading about the Marcoses at a time when the Binays are the hot topic.

To all those who shared and read my piece, I would like to thank them all. One thing the Internet has done for writers is to give us almost instant reader feedback. Until I started this blog, I had been used to writing in isolation.

But as I said, I wasn’t expecting that many people to read it. I thought it would be treated as just a period piece to mark a dark anniversary.

Possibly, interest on the Marcoses has been revived by Imelda Marcos’ announcement that she wants her only son Ferdinand Bongbong Jr. to run for president in 2016. Bongbong believes his boyish appeal and the windmills being built in his home province will make young voters go for him.

Before I go on to another topic, I would just like to answer MC who wrote in the Inquirer as a comment to my piece:

MC
Tell me a country with no bloody history. More than a million people were killed during the Cultural Revolution of Chairman Mao. A large part of the American population were killed during their civil was notwithstanding the obliteration of the indigenous American Indians who are the real Americans. Russia killed more than a million people during the Stalinist era. We just have to move forward. WHAT IS TO BE DONE?

What was written by the lady was better reserved for academic discussion in the halls of the academe where continuous dissection can be made in an ambiance of pure scholarship. But the problem at hand is economics. What are we gona do to create jobs, stimulate investments, increase agricultural productivity and restore peace and order? Those are the missions that have to be accomplished. What has the Marcoses got to do with the present lack of mining policy up to now; absence of car manufacturing roadmap or deteriorating peace and order condition? Don’t tell me that it is still Marcos who is to be blamed for the construction of the White House for Mr. Purisima or it is Imelda who is to be blamed for the mess of the MRT. What is the concrete technicallt and financially feasible proposal of Ms. Raissa to solve the daily EDSA traffic jam would be a better piece of journalism that can be written.

This is what I would call Marcosian logic that Filipinos were constantly bombarded with during the dictatorship.

The first paragraph actually justifies the use of bloody violence: Why, russia killed over a million during Josef Stalin’s one-man rule. And MC concludes – “We just have to move forward.”

My reaction to MC – you are A BLOODY COWARD. If you really believe in what you say, you will not hide behind those initials.

You want me to reserve my writings “for academic discussion..in an ambiance of pure scholarship.”

Try again, MC. You just want me to shut up, right?

My answer is, we should discuss BOTH. Why does it have to be one or the other? Why not both? Ooooh. Unless you are pro-Marcos, of course.

As for me, I like discussing the Marcoses and the present economy and a lot of things besides. On the economy, see my previous article where I discussed the laws that need to be passed in the final years of the Aquino administration. It’s entitled Pass the Freedom of Information Act – the Right, the Left and Center all urge President Aquino

Thank you, Sunstar, for inviting me to lecture on journalism before students in Cebu

I would also like to thank Sunstar publications for giving me a chance to lecture in Cebu.

The Sunstar reporter who wrote a piece on my lecture got the facts right. I commend Kevin A. Lgunda for his piece. You can read Lagunda’s report entitled “Journalist says opinion should be based on fact” by clicking here.

I also finally met Sunstar opinion editor and columnist Bong Wenceslao in person. He looks fierce in his photo. In person, he’s gentle. I knew he was closely following my blog during the trial of former Supreme Court Chief Justice Renato Corona.

Bong Wenceslao also wrote about my lecture and I’m glad he pointed out one of the gems of my blog – the many insightful commenters who congregate here and discuss in our Cyber Plaza Miranda. You can read his column entitled Freedom and responsibility by clicking here.

As a keepsake, I have this photo taken with the Sunstar editors and officials of Smart Communications – the company that sponsored my Sunstar lecture. 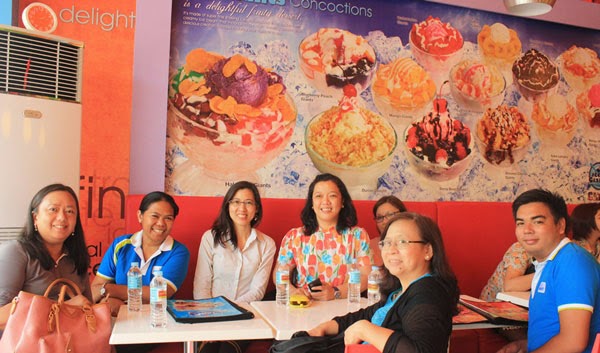 I learned a lot in turn from all of them, including some very juicy gossip I’m not allowed to publish.

And I had ice-cream with them. One of the best ice cream I’ve ever tasted in my life and that includes the gelato in Venice.