Vice-President Jejomar Binay promises that if he becomes president, he will do for the whole country what he did for Makati.

This promise has tantalized many poor Filipinos.

But what exactly does that mean?

In June 2010, I examined in my previous blog site Binay’s achievements in Makati because he was pressing President Benigno Aquino Jr. to appoint him Secretary of the Department of Interior and Local Governments (DILG) instead of then Naga City Mayor Jesse Robredo. This is an update of that post. I’ve added paragraphs based on my interview with Binay weeks after the piece came out. [NOTE: My blog – with the same name but with a different design – where the original piece was posted crashed because of a malicious virus. ]

To understand Binay’s brand of governance, I compared and contrasted it to that of another politician – the late mayor of Naga City Jesse Robredo.

I came away with the following conclusions. Both were qualified for the DILG post. But they represented two contrasting – even opposite – approaches to transparency and governance.

Mayor Jojo Binay turned Makati into a fine welfare state. The poor who comprise its majority would probably die for Binay, who has doled out to them free services. One social worker of a foreign NGO, who has lived in Makati for nearly as long as Binay was mayor there, told me for instance that under Binay, Makati’s public schools look like private schools and all the students are given free books.

But Mayor Binay runs Makati like “an urban warlord,” a fellow journalist also told me. This observation was separately documented in an investigative report published by the Philippine Center for Investigative Journalism (PCIJ) in the 1990s, which showed how Binay had taken over the network set up by his late predecessor Nemesio Yabut.

It was for this reason that I asked Binay during a one-on-one interview in 2010 whether he considered himself an urban warlord. He denied to me that he was one because he said he had no “imported” people – meaning – guns-for-hire, which he said is the mark of a warlord.  You can read his answers in the transcript of my interview which I posted here.

Binay also told me in the same interview that he had a participative style of management. He uses a bottoms-up approach. He elaborated: “I dialogue with the people. I read a lot of newspapers.”

But when I asked him whether Makati during his term as mayor had People’s Organizatons participating in city governance – which is an innovation found in the Local Government Code – VP Binay replied that for a time “we had that …it had a natural death. In the first place, nobody insisted for [sic] it.”

This is a marked contrast to the participative style of management that the late Mayor (later Local Governments Secretary)  Robredo practiced in Naga City. He institutionalized citizens’ participation in governance. Early on, Robredo persuaded the City Council to pass an Empowerment Ordinance that required citizen representation in various city government committees. I have included at the bottom of this piece my previous articles written for Asiaweek magazine to explain this.

I think this is the most basic difference between Binay and the late Jesse Robredo. While Robredo innovated with citizens’ participation, Binay innovated with giving the poor freebies. I’m not saying freebies are bad. All I’m pointing out is the great contrast between the two men in their approach to development.

Another big difference between the two was  Robredo’s transparency and Binay’s lack of it.

This could be seen in the two websites of the city

The Makati City website during Binay’s tenure as mayor was not at all transparent. Fortunately, I was able to take some screenshots of the website before his son replaced it with a new one.

Binay was not much for transparency. The Makati City website razzle-dazzled. 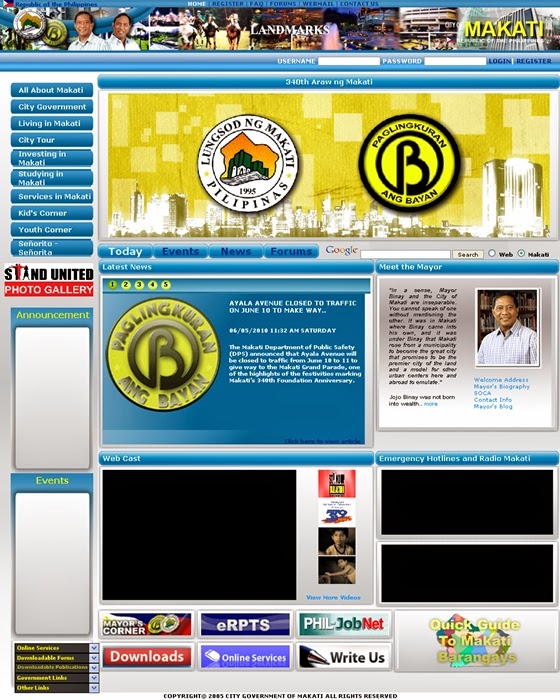 But nowhere could you find a detailed breakdown of  its income.

Nor get an idea of its yearly expenses.

In other words, you do not really know where exactly one of the country’s richest cities was deriving its income and where it was spending it.

This is in contrast to the Naga City website under Mayor Robredo. It was simple. Easy to navigate. 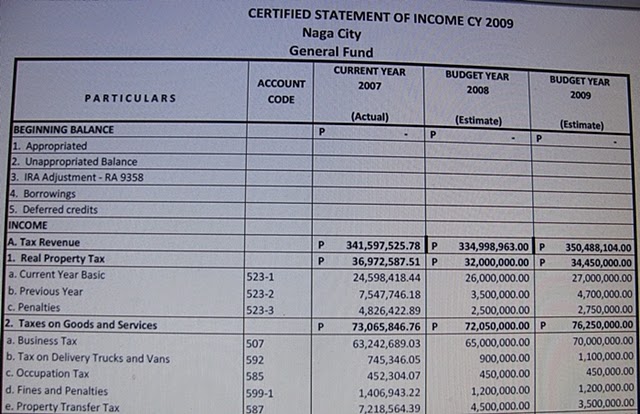 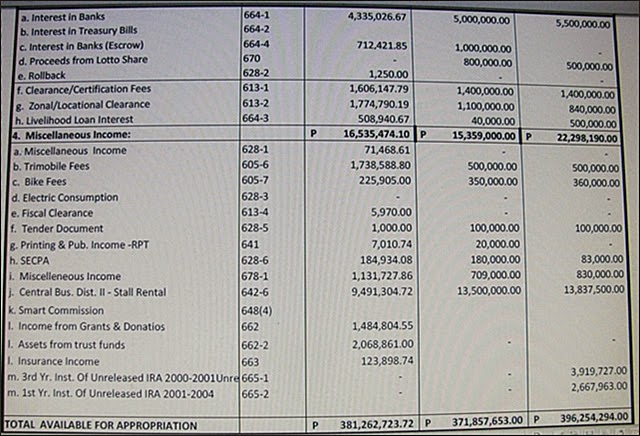 Now compare that to how Makati City under Mayor Binay disclosed its income. 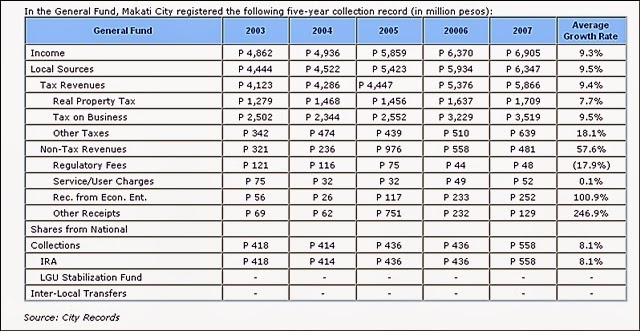 I copied this from the Makati City website when Jojo Binay was still the mayor.

Perhaps the DILG Secretary Mar Roxas could require all local government units to use a standard format for disclosing income and expenses. Perhaps, that of Naga City can be used as the template.

Now notice that despite its being income-rich and the premiere business district, Makati City under Mayor Binay was in fact spending more than it was earning from 2004 to 2007:

Deficit – Or spending beyond its income – P666 million

Deficit – Or spending beyond its income – P1.337 billion

Deficit – Or spending beyond its income – P2.485 billion

This shows that from 2004 to 2007, Makati under Mayor Binay spent more than it earned. But it didn’t say how it filled the gap in those four years.

This means that Mayor Binay went into deficit spending. But there was no explanation given what this was for.

Also, please note that in 2007, close to half of its revenues came from business taxes (P3.5 billion) and only P1.7 billion pesos came from real property taxes despite the stupendous number of office buildings and mansions there. And the deficit spending amounted to P2.485 billion.

Most local government units only post the bid notices online. But they do not post the winners.

In Naga City, Robredo posted even THE RESULTS OF THE WINNING BIDS. 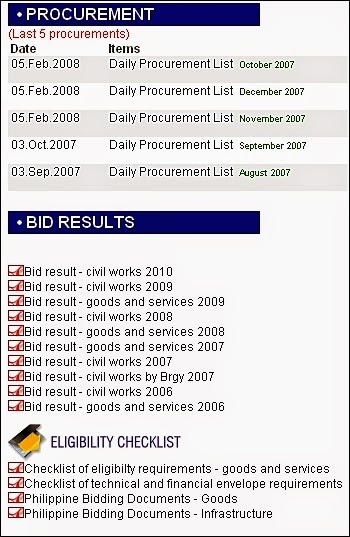 Quezon City government also doesn’t have this feature. Just like many other cities and towns and other government websites.They are all opaque and mysterious. Posting the actual bid results should be a standard feature in all government agency websites.

Perhaps if Makati City had this feature, it would have been obvious early on that Hilmarc Construction was winning many major construction projects.

When I wrote this piece in June 2010, my hope then was that if Jesse Robredo could require every province, every city and town – including Makati – to be this transparent, then ordinary citizens can monitor any attempts at corruption better.

Robredo was never implicated in any corruption scandal.

In contrast, Binay has been the subject of an investigative report by Miriam Grace Go of Newsbreak entitled “The Lord of Makati: Can Binay explain his wealth?” It won first prize in the 2002 Jaime Ongpin Award for investigative journalism.

When I wrote the original version of this piece in June 2010, Robredo had not yet been appointed DILG Secretary. He and Binay were vying for the post. And I said Robredo would have to ask himself the following hard questions:

The post of DILG would require him to skip lunch with his family – a ritual he has been able to maintain as mayor of Naga. Can he do that?

As head of the DILG, he would also assume the post of chairman and presiding officer of the National Police Commission, which exercises administrative control over the entire police force. Can he be tough enough for this? Knowing that one of his predecessors, Col. Jaime Ferrer, was assassinated while doing this job? (I was covering Ferrer when he was gunned down.)

Finally, the post would require him to be the government and the Liberal Party’s eyes and ears in the countryside and control the grassroots state network – the same one that President Gloria Macapagal-Arroyo mobilized to try to amend the Constitution. Can he stomach the wheeling and dealing that goes with that?

Shortly before PNoy launched his presidential bid I was able to have a chat with Robredo. I asked him why he had not run for Congress, which he told me years ago was part of his plan for when his children reached college age.

“Plans change,” he told me.

Looking back, I sometimes wonder whether Jesse Robredo would be alive today had he not gotten the DILG post. But I also feel he wouldn’t have had it any other way.

Below is my Asiaweek magazine report in the year 1999 on how Jesse Robredo changed Naga City.

I do hope the next President of the Philippines can duplicate what Jesse Robredo did in Naga in most of the cities and towns of the country. Which is why I batted for Robredo to become DILG Secretary. 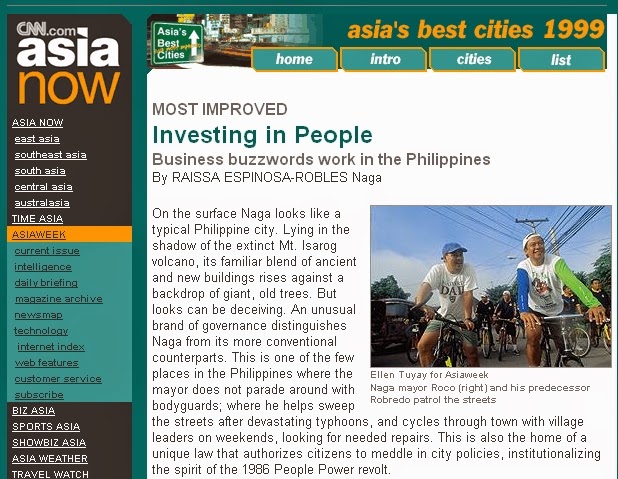 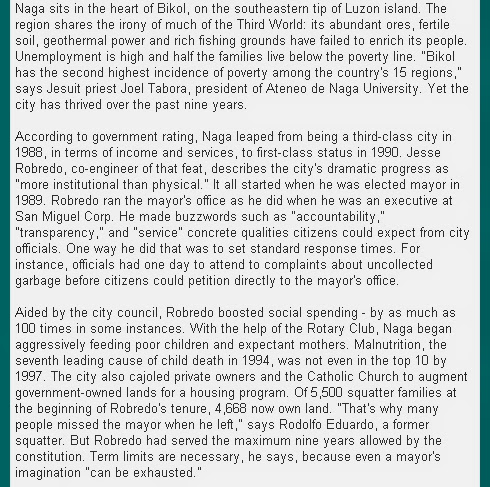 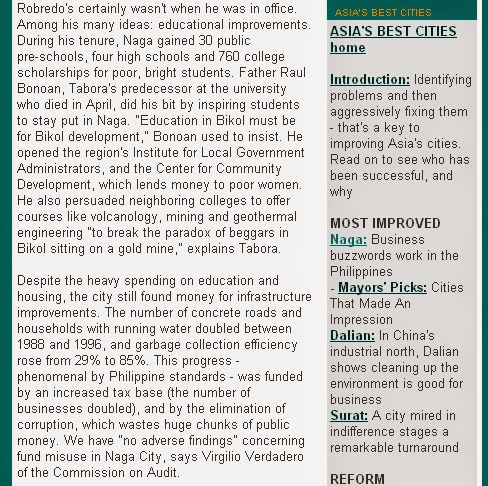 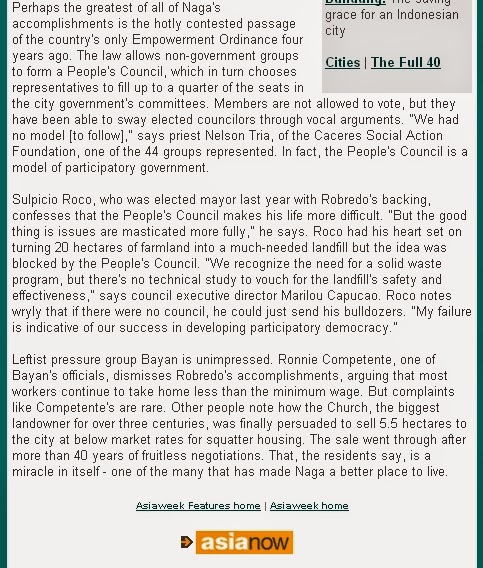 When Robredo was hand-picked to receive the 2000 Magsaysay Awards, Asiaweek asked me to do a profile of him without knowing it was for that. Here it is: 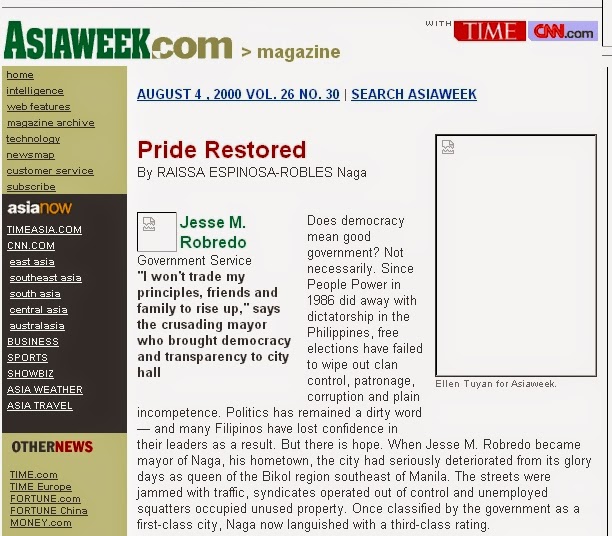 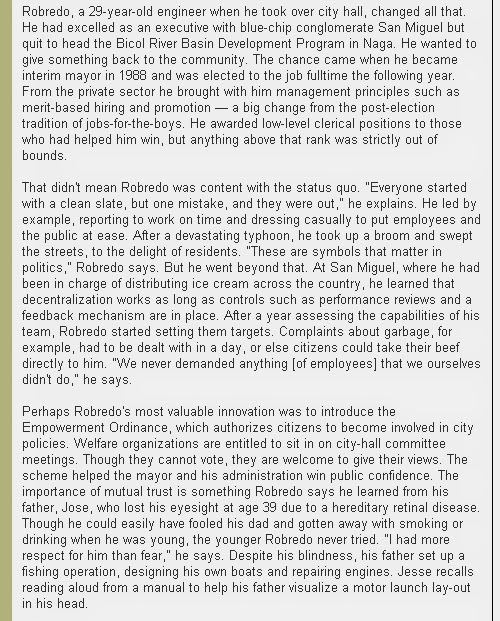 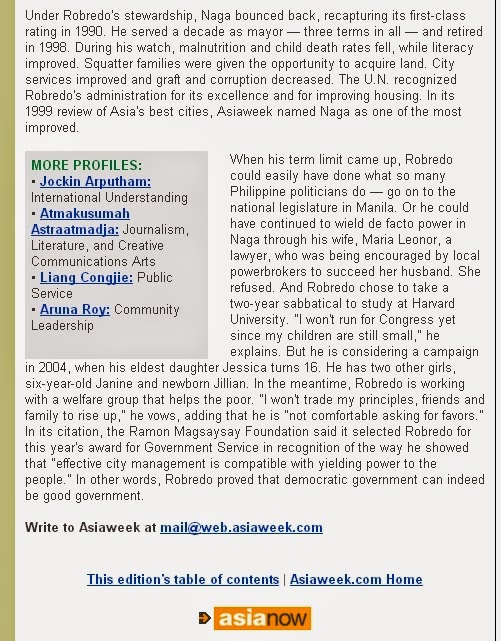 How was VP Binay able to buy three properties even as a young and poor law student?

Binay fan wants his “idol” to explain the building

Isn’t this laying it on too thick, VP Binay