When Jette Po and her medical colleagues went to Samar last year to help victims of Typhoon Haiyan they were stunned by a realization. Most of the residents had never had any medical or dental treatment.

“Meeting people who have never seen a doctor in their entire life is something incredible for us,” Jette told me then as she narrated her experience in the aftermath of what we locally call Typhoon Yolanda.

“Yolanda was just an eye opener of how bad the health situation is in a lot of barangays and provinces. This is just a sample of what’s actually going on in the provinces,” she said.

As I write this, I cannot help but think of the late Senator Juan Flavier who started a movement for doctors from top medical schools to serve even for a while in the rural areas.

It was in this spirit that Jette – a dentist born in Manila – went to Samar on November 21, 2013  as part of a medical team of five doctors, a nurse and her.  They tended to the residents of the most badly hit towns – Basey, Lawaan, Balanggiga and Giporlos. 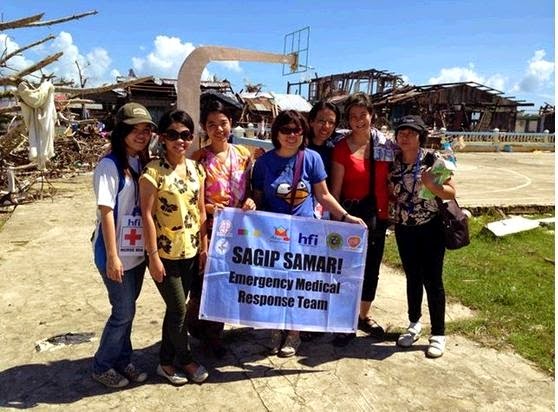 Jette recalled how the landscape changed from green to brown to black as they walked into a devastated town. “It was like you entered into a color film that became sepia.”

“And everyone just walked around with blank stares. None of the babies cried.” This was probably due to dehydration from lack of milk and water.

A sixty-year-old doctor, a veteran of medical missions to the poorest provinces, broke down for a moment at the scene of devastation. 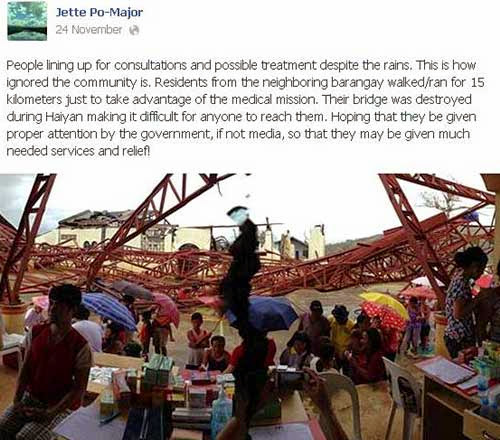 “As a dentist I didn’t see a single patient without any cavity.  I’m talking about broken down teeth, gum disease.”

“I suspected oral cancers – I don’t know how they are going to have those diagnosed,” said Jette, who took further studies in oral cancer at Hokkaido University.

She could not tell a male resident to have a further check-up. “They are dirt poor – how do I tell him he has cancer when he doesn’t even have any money to feed himself?”

In a land which boasts of at least 50 US dollar billionaires, most Filipinos are treated like throw-away people.

In a land where wealthy politicians accused of high crimes avoid jail cells by taking refuge in gleaming, luxurious, plush and state-of-the-art hospitals, very few beds are reserved for the vast majority who are poor.

The typhoon merely placed a spotlight on the vast inequity. 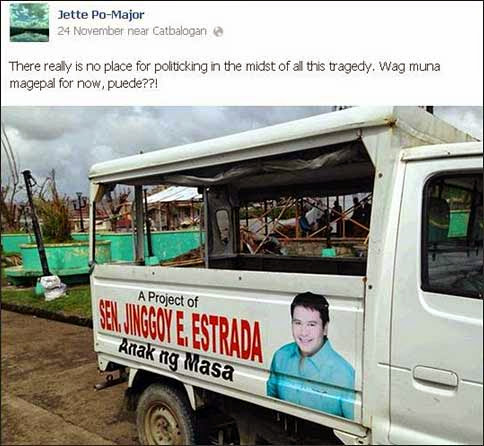 While Jette Po was in Samar, she spotted this vehicle passing by.

Let’s not move on until we correct this imbalance in a big way. It’s the only way to honor the thousands who died a year ago.