And my other experiences while testifying at the Senate

When I testified at the Senate Blue Ribbon sub-committee on Oct 30, a clutch of nuns in white and grey habit quietly sat in the rear gallery of the Senate session hall. Well, maybe they weren’t TOTALLY quiet.

During the testimony of businessman Antonio Tiu, some of the nuns went “tsk, tsk, tsk” and shook their heads, according to a friend of mine who sat with them.

The Senate Sergeant-at-Arms, who has the job of keeping order in the hall at all times, would raise a sign that said “Silence” in order to shush the up. The nuns would subside. But then they would go “tsk,tsk,tsk” again upon hearing more from Antonio Tiu.

And the Senate Sergeant-at-Arms would once again raise the sign that said “Silence.”

When I talked to them before the session started they told me they were members of the Association of Major Religious Superiors of the Philippines (AMRSP).

Those who know what the Association of Major Religious Superiors of the Philippines is would understand the significance of the nuns’ presence at a politically charged event. During the dictatorship of Ferdinand Marcos, the nuns of the AMRSP were at the front lines fighting human rights abuses. Today the AMRSP is one of the vanguards of the anti-corruption movement within the Catholic Church.

During the recent closed-door meeting of Vice-President Jejomar Binay with the Catholic Bishops, some nuns were also present according to news reports. I wonder if some of them were the same ones who had attended the Senate hearings and went “tsk, tsk, tsk.”

Here’s a short video I took of the listening nuns. The video shows the view from inside what we reporters used to call “The Cage” – the area where “resource persons” and “witnesses” stayed, which was off limits to reporters.

When businessman Antonio Tiu was testifying I realized the stark difference between the first post-Edsa 1986 Senate and the Senate today. Tiu was actually being allowed to talk back to the senators. That was a no-no before. The likes of Senators Ernesto Maceda and John Osmena would have eviscerated him.

But I also realized that blasting Tiu would not have resulted in the kind of answers that he gave Senator Alan Peter Cayetano. Answers that could later be used against him and against VP Binay before a court of law.

During the interrogation of Tiu as a “resource person”, Senator Cayetano was more patient and diplomatic toward Tiu than Senator Antonio Trillanes. Trillanes accused Tiu several times of lying to his face.

Which is perhaps why VP Binay backed out of the debate with Trillanes that he had proposed in the first place. Trillanes would not have hesitated to tell Binay to his face on prime time TV that he was lying.

And Binay himself has a short temper.

Our row faced the senators directly. The row on my left had the resource persons who belonged mostly to the Binay side: The vice-president’s legal counsel Martin Subido, Antonio Tiu and Hillmarc Construction Corporation chair Efren Canlas. I knew that Atty JV Bautista and UNA spokesman Toby Tiangco were gate-crashers that day because there was no name plate neatly prepared for them on any table.

Again, that kind of behavior would never have been tolerated by previous senators.

One advantage I had testifying at the Senate was that I was inside The Cage for the first time.

I took the opportunity to hook up with sources exchanging business cards and phone numbers as I could from among the other witnesses and resource persons.

When I asked the dreaded Tax Commissioner Kim Henares for her business card, she asked me sharply “Who are you?” She was refreshingly blunt.

When I gave her my card, she softened and told me she didn’t recognize me because my hair was now long, compared to my photo (on the Internet, I guess) where my hair was shorter.

My seat mate that day was Securities and Exchange Commission Chair Teresita Herbosa. Perhaps, had I met her during coverage we wouldn’t have been as comfortable chatting with each other. But there’s a certain invisible bond generated among witnesses and resource persons – at least in the middle row where I sat. 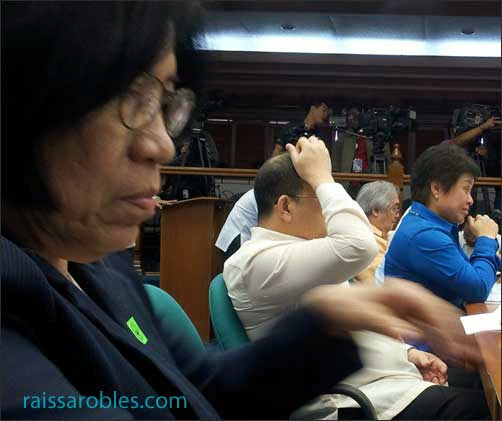 I noticed that BIR’s Henares, Agrarian Reform Secretary Virgilio de los Reyes and SEC Chair Herbosa used the breaks in the Senate probe to compare notes and impressions with each other on VP Binay’s case. Probably for the first time. They also said they would get in touch with each other on certain documents. 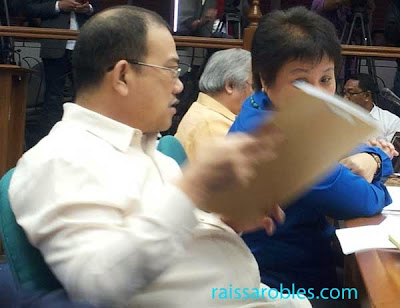 Here below is a snippet of a video I took of the Senate session hall. The voices in the background are those of Henares and the other officials discussing the case.

Someone asked me what the food was like at the Senate.

The short answer: “Tough”. Whatever it is the Senate is spending its budget on, it isn’t on fine food.

The food – brought to the witnesses and resource persons by uniformed waiters – was well presented on a plate and covered with Saran plastic wrap to keep the heat in. I was debating whether or not to eat lunch because I knew the audience and the journalists would not be getting any. But feeling faint with hunger, I decided to eat. The cream soup was promising, not outstanding but well seasoned.

The meat was bland and gnarly. Except for the nice cutlery, It reminded me of the food at Vinzon’s Hall in the days of gastronomic nightmare at the University of the Philippines

After the Senate hearing, I met for the first time Senator Cayetano and we shook hands. His hand was very cold, I realized, from the central air-conditioning. I wondered how he could stand the cold in his barong.

He joked he wasn’t sure he wanted to be interviewed by me because he noticed that all those I had interviewed later met their downfall.

I don’t know why a word balloon persisted in my mind while talking with Sen. Cayetano. It consisted of two words – “yung kahoy”. The words that former Senate President Juan Ponce Enrile told Cayetano. Anybody who can reduce the former Defense Minister Juan Ponce Enrile to uttering such memorable lines is an interesting subject for me.

Plus, I would like to see for myself “yung kahoy” that Enrile said he had supplied the Cayetano family home that should have earned him their life-long gratitude and loyalty.