Thirty one years after leaving the Marcos government, former senator Vicente  Paterno finally broke his silence about what he really thought of the dictator Ferdinand Marcos in a memoir which he personally launched a week before dying peacefully in his sleep.

Earlier, just before his November 11 book launching, I was sent a copy of the draft manuscript and I had noted the glaring absence of his personal assessment of Marcos’ heinous crimes. I therefore wrote:

I would have wanted to read Paterno’s assessment of the late dictator and thief Ferdinand Marcos. But he did not include that. He merely said:

“I left the Marcos cabinet in November 1980 because I wanted no part in the anomalies that his cronies were bent on perpetrating.”

However, when I read the book On My Terms, I saw he had tacked at the end an additional chapter. It was entitled “Appraising Marcos”.

Paterno had decided to tackle the very issue head on. Paterno started the chapter by hemming and hawing about how Marcos was kind to him and his family and gave him all the leeway to perform his functions as Board of Investment Chairman,then Minister of Industry and Minister of Public Highways. Then on the second page, Paterno tentatively began his revelations about his former boss of 13 years:

“In late 1978 I began to experience increasing pressure from Marcos cronies to accommodate crooked projects; I wanted to leave his government since then…

Unfortunately, he did not go into details – who these cronies were and what the pressures were.

But he detailed the rise of Imelda Marcos as the Philippines’ de facto president, as her dictator-husband became afflicted with lupus and “would disappear from public view for days.”

“Marcos’s illness and Imelda’s bad national governance brought on negative economic growth in 1981-1986. This was also the period when it was observed by critics that loans by international agencies and foreign banks were doing a U-turn. Incoming loans from foreign sources were being remitted outward, presumably to Marcos’s coffers abroad. During 1983-1984, loan interest rates reached 60%, while price inflation surged to 40%…”

“An image of Imelda that stays in mind is her employing a video-camera man in her party to train his lights and camera on her sailing through the crowd in formal dress, ladies in her evening gowns and their escorts in frock coats (white tie and tails), entering the halls of the Opera Ball in Vienna.”

“The amount of theft perpetrated by Marcos’s regime was probably less than that by Suharto on Indonesia, but harmed our country more because the sums stolen by Marcos were sent out of the country, whereas Suharto’s loot mostly were invested in Indonesia. Both were condemned for violations of human rights, about which I only heard, but had little personal knowledge of.”

Paterno is the only Marcos cabinet minister who has ripped away Ferdinand Marcos’ emperor clothes and judged him for what he truly was: a world-class thief.

To this day, none of the other ex-Cabinet ministers or high ranking technocrats has come forward to condemn Martial Law for what it was – a vicious dictatorship intended to plunder the Philippines and keep the Marcoses in power. And that includes Marcos’ cousin and Philippine Constabulary chief Fidel Ramos and his Martial Law administrator Juan Ponce Enrile, who went on to become Philippine President and Senate President, respectively.

And of course, Marcos’ children – two of  whom are elected officials – and wife Imelda, also an elected official, all continue to deny the reality of the Marcos’ crimes against the Filipino people. In fact they have dedicated themselves to erasing his misdeeds from collective memory. What does that make of them?

Now let them publicly deny what Paterno wrote. Especially those parts where Imelda Marcos tried to make him do unsavory acts as a Public Highways Minister and eventually eased him out from that post.

Aside from finally conceding that Marcos was a thief, Paterno’s memoir should be read by Filipinos for other reasons.

First, it gives a sweep of Philippine history from just before World War II to the present but in a very human and personal way.

Second it delves into the nature of corruption, explained by someone who proved incorruptible many times over. And Paterno suggested practical solutions for reducing state corruption.

Third, it gives the story of how to grow a business even if the current political leadership is mad at you ad you don’t have the right political connections.

Fourth, it is probably one of the most honest and truthful books I have read of Philippine contemporary history by a trustworthy source.

Fifth, Paterno tackles subjects that continue to bedevil us as nation today: the high cost of transporting agricultural products from the farms of Mindanao to the markets of Manila. The need to bring progress across regions outside Manila. The need to decentralize the powers of Manila over politics and the economy.

Sixth, Paterno unmasks the betrayal of his father by someone who has been lavishly praised as the first pre-war Filipino industrialist. So deep was the wound left by the late industrialist Vicente Madrigal that when Madrigal tried to visit the wake of Paterno’s father, Paterno wrote:

But the family grudge, he said, did not extend to other members of the Madrigal family. And I saw proof of that because I bumped into a college classmate of mine – Gizela Madrigal Gonzalez-Montinola. In college, I had no inkling she was wealthy because she dressed grungily like the rest of us. When I saw her at Paterno’s book launching, she still was the same Ging I met in college. We had a picture taken together.

I would like to think I was among those who had prodded former Senator Paterno to write down his story.

In 2006, Paterno was my main whistle blower for my story on then President Gloria Arroyo’s nearly successful attempt to change the 1987 Constitution so that she could stay on in power. The documents that accompanied my story for the Philippine Center for Investigative Journalism (PCIJ) all came from Paterno. You can view them here. http://pcij.org/stories/arroyos-charter-change-moves-copied-from-the-marcos-book/

It was also around that time when I first asked Paterno about his stint in the Marcos cabinet. He told me his anecdote about the banyan tree and the young female singer from whom he fled in the night. And I enthusiastically told him that he must write his memoir. But I don’t recall seeing in his book his story about the diamonds he was offered as a bribe to approve a project in Mindanao.

As a former senator, Paterno was entitled to have his body lie in state at the Senate session hall.

But he chose to be cremated swiftly.

When I went to his book launching last November 11, I knew he was ill but I did not know he was dying. The book launching started late because it took some time for Paterno to be transported to the Manila Polo Club and be wheeled in with a tiny oxygen tank.

I touched his sleeve to say hi. He turned, saw me, pulled me strongly and kissed me firmly on the cheek. No words. Just a kiss. Now Paterno is not a touchy-feely guy. He never bussed me on the cheek in all the years I covered him. With the kiss I knew he was saying goodbye.

And so I decided we should have a selfie together, which I took. He managed a smile. 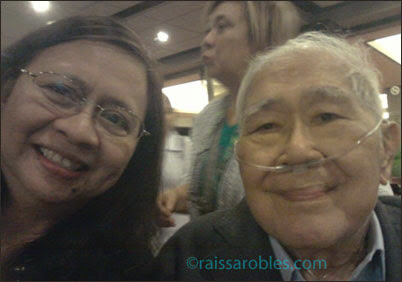 The book launch was a rare event. Here was a dying man who was lucky enough to get an advanced hearing of what the eulogies on him would sound like.

And then Paterno spoke. Here is a video I took of a part of his speech. Sorry I could not go up front. The room was so crowded.

I didn’t always agree with Paterno’s stand – for instance, he voted to have the US bases retained. I also didn’t agree with the way he had deodorized the Marcos dictatorship with his presence in the Marcos cabinet. But I think his memoir – dedicated to his grandchildren – is like an atonement for that.

He and former Senator Rene Saguisag were the only ones who did not seek re-election in 1992 because they could not live honestly on a senator’s salary. And for that I salute them both.

I shall miss Paterno as a source because he was always blunt and what he said had substance.

There is something I still need to do, which I told him I would do after he told me about it. But more on that later.

Meanwhile, here are some more photos I took during the book launching.

The first one below is a selfie taken with another source – Oscar Lopez of the Lopez Group. I had enjoyed interviewing him for a South China Morning Post piece on the fall and rise of the Lopez business empire. Paterno had a lot of interesting insights to say about his on and off relations with the Lopez family: 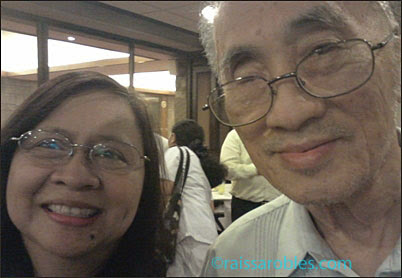 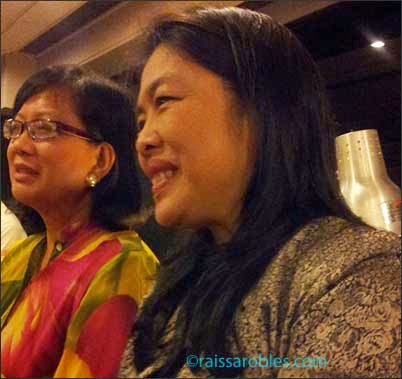 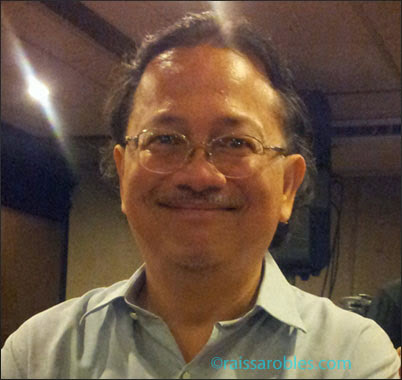 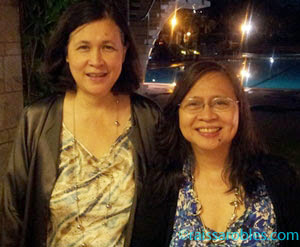 I bump into a former classmate, Gizela Gonzalez, one of Vicente Madrigal’s grandnieces. This showed that Vicente Paterno did not completely shut out the Madrigal side despite Vicente M’s betrayal.

And by the way,the book editor is Nancy Pe Rodrigo, widow of the late historical writer Raul Rodrigo. The layout is by poet Ramón RayVi Sunico of Cacho Publishing House. Those who want to order the book can e-mail [email protected] or [email protected]