Hotmanila, the satirical political website of my hubby Alan has been hacked, ostensibly to deliver this message to President Benigno Aquino III:

“We are watching you, Mr. President.”

The hacking apparently took place after Aquino was severely criticized by netizens for showing up late at the wake of the police commandos yesterday. [A fact-check showed that PNoy was late at the site of the wake for four minutes, since his appearance was required at 10 a.m. But the ceremony before his arrival had finished at around 9:38 a.m. so the emcee had  announced that they will wait for PNoy’s arrival. During the 22-minute gap between his scheduled arrival and the early end of the rites before that, netizens sharply criticized PNoy for his seeming tardiness. ]

In any case, the hackers placed on Alan’s site the hash tag #NasaanAngPangulo (Where is the President) at the bottom of their message.

Here are screen captures of what they posted on Alan’s site: 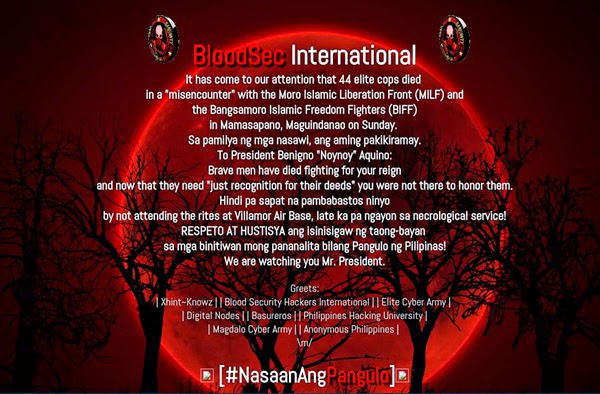 I discovered the hacking late this morning while drinking my coffee (because I had stayed up late in the night working).

Alan’s reaction was one of amusement.

“I was hacked for at least two possible reasons. No 1, I’m famous and a lot of war-loving walter mitty fascists hate me. Apparently, my very minor site makes an impact.

Or more depressingly, number two, my site is easy to attack by script kiddie amateur kindergarten hackers because I never protected it and it can easily be exploited by untalented pretend- hackers who probably don’t have many computing skills and probably use downloaded scripts.”

The day before the hacking, Alan posted an article entitled – “Mamasapano: What happened?” – which drew from his vast reservoir of knowledge as a student of military history. I had posted this link to his piece.

Because of all the recent revelations on the tragic Maguindanao operation, I wanted to reread Alan’s post this morning and so I clicked the link I had placed in my post entitled – Questions on the police commandos’ death in Mindanao from a student of military history.

Like me, Alan is also a freelance journalist who writes for South China Morning Post and other foreign and local publications and is a member of FOCAP. He has a satirical column on abs-cbnnews.com.

At first my bleary eyes thought my fingers had pressed the wrong URL link. I pressed the link again – this time  slowly and deliberately – and that was when I realized his site had been hacked.

As for my own site, I know that there have been many attempts to try to hack it. Which is why I have been very careful about posting comments with links. Please bear with me if your comments seem to disappear for a while. It is one of the built-in safety features to keep my blog from getting hacked.

This is what I know so far about what happened, I have no doubt more info will come in.

3. The SAF declined to ask for AFP assistance and support. It seems there were no plans and provisions for support, extraction and rescue in case everything went south.

5. “Wolverine” had no armor, air and artillery support. I’m not even sure the commandos brought heavy weapons such as HMGs and/or light mortars or recoilless rifles.

6. The target area is open marshland with swamps and a river. Tukanalipao is a village accessible only by a rickety bamboo bridge. The commandos were apparently not familiar enough with the terrain to have set up a safe withdrawal route, which goes against the grain of standard commando ops where units know every detail of their operational area.

7. It seems there was no contingency plan detailing steps to be taken if the operation went wrong.

8. Both terrorists had a combined bounty of US$9 million, offered by the US Federal Bureau of Investigation, for their capture

9. The SAF commander only informed his immediate superior of the operation only when it was well underway – and presumably, a recall order was impossible.

10. It was a night/early morning operation (giving the advantage to commandos with night vision gear).

11. The commandos apparently arrived at the area of operations and didn’t immediately go into action, but waited at least an hour. Did they walk and wait? Were they flown in?

12. I suppose the force would have been divided into at least three elements: assault, support and cover/blocking. The assault element attacked the target village and — reportedly — neutralized one target (Marwan). It took DNA samples, then decided to bring the whole body with it

13. At this point things aren’t clear. Did the assault element safely withdraw away from the town, leaving the blocking force to delay pursuit, or was it trapped? One report says it was the covering element that was pinned down in a firefight that lasted nearly 12 hours. What happened to the other platoons?

15. The trapped force called for military support but this was initially ignored: the soldiers who received the message had not been informed of the operation and thought the call for help was a prank. By the time action was taken it was either late in the day or there was difficulty identifying the commandos and therefore a real risk of firing on them.

17. It was a “massacre” in the sense that the SAF detachment wound up outnumbered, outgunned and pinned down. At some point they ran out of ammunition. Perhaps they tried to break out of the trap individually. Ther is no word if they tried surrendering.

Both sides have a lot of explaining to do. On the part of the government, who gave authorization for the operation? Were the commanders aware that the operation was a possible provocation and violation of the ceasefire? If the terrorists had to be caught, why didn’t the government forces move in with sufficient, fully supported strength? And who were those foreigners — allegedly Americans — spotted in the area? It has led to speculation the operation was US-directed. As for the MILF, what were two notorious terrorists doing in its area? Is this an indication of how things will be once it gets its autonomous zone?

What would an ‘All-Out War’ in Mindanao cost us?

Haiku on the death of 44 police commandos

The slain police commandos and the “Moro problem”

What would Pope Francis say about avenging the policemen’s death in Mindanao?