Even as I write this, political forces against the Aquino administration are furiously plotting how to exploit the Mamasapano fiasco in order to bring down the government of President Benigno Aquino III.

In the light of this, let me share with you a think piece which my journo-husband Alan wrote about coup attempts.It’s time to refresh our knowledge about coups. 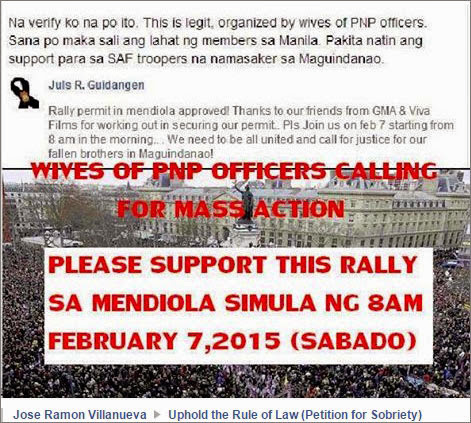 Just In: I believe that the more information the public knows from all opposing sides, the better. Which is why I’m posting this: [NOTE – Alan’s think piece starts below the press statement.]

We, party list representatives from the Makabayan bloc, add our voices to the mounting call for Pres. Benigno S. Aquino III to resign.

Aquino must resign! The President must resign for the sake of the nation, to save our nation from further disasters, moral bankruptcy, and massive poverty.

President Aquino is unfit to rule and has betrayed public trust. This is evident in the bloody Mamasapano fiasco and the unconstitutional Disbursement Acceleration Program (DAP) as affirmed by the most recent Supreme Court decision.

Aquino’s hand in the unconstitutional DAP was affirmed with the final ruling of the Supreme Court. He and Abad authored DAP and used billions of people’s money as “pork barrel” — to bribe senator-judges to impeach Corona, provide compensation for landlords including his family, fund his pet projects, and give patronage to favored politicians. With DAP, Aquino took away precious funds intended for social services for the people and the benefits of government employees.

We must not wait for another transgression or disaster to happen. Give the nation a break, a chance for renewal. Aquino, resign! ###

Military takeover: Can it happen here?

On May 2014, Thailand’s military took over the country, shoving politicians aside, grabbing control of government agencies, rounding up people it considered threats and suppressing free speech.
Could it happen here? Yes.

Wait, you say, aren’t Philippine coups a thing of the past? Isn’t the Armed Forces of the Philippines (AFP) now a disciplined, well-behaved group that obeys the Constitution and assures the public that it respects civilian authority?

To begin with, it’s worth remembering how in the past, military officers had a habit of declaring their respect for civilian authority and fealty to the Constitution — just before gearing up and driving off in assorted trucks and /or armored amphibious vehicles to stage a power grab.

Then consider this: the Thai military have staged 19 coups d’etat (12 of them successful) in eight decades, a putsch roughly every four years. The Philippine military have mounted at least 13 coup attempts (all of them failures) in 21 years — a coup every year and a half. The violent coups from 1986 to 1990 killed dozens and inflicted billions of pesos in catastrophic damage on the economy.

You might want also want to recall that the country’s last military uprising attempt didn’t take place in the late 80s, it happened seven years ago. Granted, that affair consisted of two dozen armed soldiers holing up in a five-star hotel and calling for Gloria Macapagal Arroyo’s ouster. Taking mere hours to break up (government forces fired tear gas then sent an armored personnel carrier smashing through the plate glass of the lobby), it was a pale and farcical shadow of the bloody and murderous attempts of the late 1980s. But it showed that groups of soldiers were still ready for adventurism.