E-mails between the slain bomber Zulkifli Abdhir, alias Marwan, and his brother Rahmat Abdhir bare a brisk trade in weaponry in the south, even between rebels and soldiers.

“Commander A Wahid says that there is a soldier who wants to sell a new .50 caliber, for US$5,000. He said that he can only afford 2K, and asked to find the remaining 3K hehe…”

The e-mails are part of the 40-page indictment filed against Marwan in California on August 1, 2007.It was initially sealed and later made public. I have attached the indictment at the end of this piece.

The e-mails give a rare glimpse of the conflict from the Muslim rebel side.

They also show the ease with which one can order magazines (for guns, not reading materials), scopes and radios from the United States to Mindanao, the way women in Manila order makeup and clothes by mail.

Here’s an example of the actual contents of a box posted to Marwan by his brother in California who is now detained facing charges for aiding a terrorist. You can see Marwan had “stateside” taste. He liked to wear Fruit of the Loom briefs and eat Snickers and Hershey chocolates: 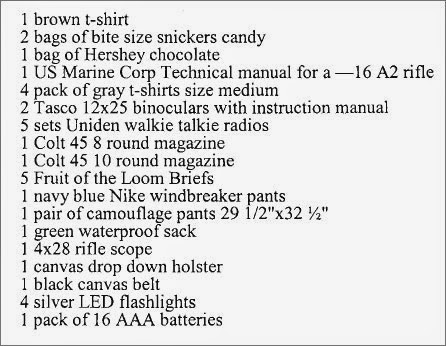 The e-mails have a very matter of fact tone, even when talking about the deaths of “martyrs”.

There is no question from these e-mails that Marwan was engaged in bombings and in teaching snipers.

Or that he was close to at least one Moro Islamic Liberation Front commander – Abdulwahid Tundok who heads the 118th Base Command. It is also Tundok who is being accused of firing at Special Action Force commandos in Mamasapano last month which resulted in numerous deaths. Almost a year ago, Tundok was arrested at a military checkpoint  but released to “a politician” who remains unidentified to this day.

Cayetano was even quoted to have said:

You are fighting a people here, and not just a group of armed men. You can rail all you want but that’s the truth.

And the longer the negotiations take, the more Marwans you are bound to attract in Mindanao.

Can you simply erase the Muslims from Mindanao with an all-out war?

Well the Spaniards tried that for 333 years and did not succeed. They only managed to gain a foothold in certain places like Zamboanga City (which explains the enmity between the locals there and the Muslims).

Marcos also tried that and almost lost Mindanao, according to retired General Fortunato Abat who told me a fascinating tale about the day he nearly lost Mindanao.

And there’s another problem. A take-no-prisoners, all out war will open the government to charges of genocide before the International Criminal Court. Which could give Filipino Muslims the needed ammunition to petition for secession.

What I believe the Philippine government can do is to place safeguards in the planned autonomy law that would make Mindanao a much less hospitable place for extremists and discourage secession.

And make them swear by the Quran that the Isis-brand of Islam and similar beliefs will be barred from taking root in the south.

You can read the indictment against Marwan below: