The unprecedented case filed by Amal Clooney for Gloria Macapagal-Arroyo could backfire on the detained ex-President, according to the director of the Reparative Justice Programme of the International Centre for Transitional Justice in New York. 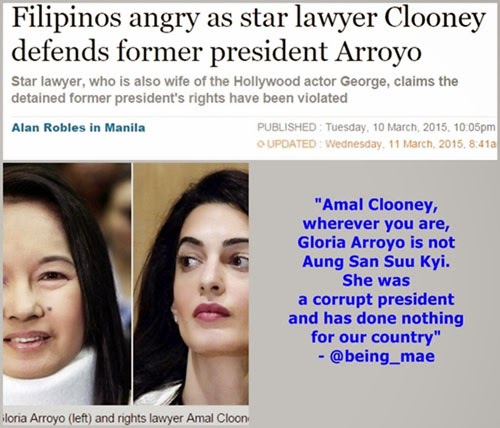 Hollywood actor George Clooney’s high-powered lawyer-wife has submitted a complaint before a unit of the United Nations dealing with human rights accusing the Philippine government of violating Mrs Arroyo’s civil and political rights by keeping her under hospital arrest and barring her from going abroad to seek treatment.

UPDATE: The UN office in Manila has just issued this statement on the case

Contrary to some of the media reports, this case was not filed with the Human Rights Committee which is the individual complaints mechanism under the Optional Protocol of the International Covenant on Civil and Political Rights (ICCPR). Please note that this case is not being handled by the U​nited ​N​ations​ ​
in country – all is being done through the Working Group on Arbitrary Detention.

Please find below a statement from the Secretariat of the Working Group on Arbitrary Detention:

“We can confirm that the Working Group on Arbitrary Detention has received a petition in relation to Ms. Gloria Macapagal-Arroyo, and that the case is now confidential. The confidentiality rule is part of a normal process adopted by the UN Special Procedures mechanisms in order to protect all parties. Consequently, none of the Working Group’s five members can comment publicly on a case until the Working Group issues an opinion. Once they issue an opinion, only the Group’s experts can talk about their decisions; no one at OHCHR can talk on their behalf. At the moment, there is no specific date scheduled for the experts to adopt an opinion related to this case. For more information about the Group’s mandate and activities, log on to: http://www.ohchr.org/EN/Issues/Detention/Pages/WGADIndex.aspx

Special Procedures – the largest body of independent experts in the UN Human Rights system – is the general name of the independent fact-finding and monitoring mechanisms of the Human Rights Council that address either specific country situations or thematic issues in all parts of the world. Special Procedures experts work on a voluntary basis; they are not UN staff and do not receive a salary for their work. They are independent from any government or organization and serve in their individual capacity.”

But Ruben Carranza, who works as program director for the highly influential NGO that assists victims of repressive regimes, told me and Alan that Arroyo’s special treatment in Manila may in fact violate the very treaty that Atty Clooney is invoking in behalf of Arroyo.

“The violation that may have in fact been committed is a violation of the ‘equal protection’ clause in the [Philippine] Constitution (which her lawyers know is also in Art. 26 of the human rights treaty -the ICCPR – they invoke.”

ICCPR stands for the International Covenant on Civil and Political Rights to which the Philippines is a signatory.

Its Article 26 states that:

Carranza, who was once an assistant secretary of national defense under the Estrada administration and a commissioner of the Presidential Commission on Good Government under President Arroyo, pointed out that “like Estrada before her, Arroyo has received privileges in detention denied other similarly-situated detainees.”

Arroyo’s lawyers, who lauded the filing of the case before the UN, also probably forgot that during the Arroyo presidency, her justice secretary had a woman with a similar rare bone disorder also barred from traveling abroad.

I wrote about it in a piece entitled:

You can read about it by clicking here.

Again, this would be a telling argument that Arroyo is asking the UN to back her request for special privilege, which she herself did not extend to Ms Yogie Martirizar, a co-accused in the same poll sabotage case now pending in court.

You can read an excerpt of Alan’s piece below:

Star lawyer, who is also wife of the Hollywood actor George, claims the detained former president’s rights have been violated

Filipinos have reacted with disbelief to reports that star international lawyer Amal Clooney had filed a complaint to a UN human rights body on behalf of detained former president Gloria Macapagal Arroyo, who has been repeatedly denied medical treatment abroad for a rare bone disease.

The 67-year-old former leader Arroyo has been under hospital arrest since 2011 on charges of vote-rigging and corruption and is being held in a government hospital where she is receiving treatment for her spinal problem.

Earlier this week Arroyo’s lawyers announced that the wife of Hollywood movie star George Clooney had filed the case last month at the Geneva-based UN Working Group on Arbitrary Detention, a unit of the UN Commission on Human rights.

Attorney Modesto Ticman said Clooney argued Arroyo’s rights were being violated because she has been repeatedly denied bail and the chance to travel abroad to get treatment.

However, other legal experts in the Philippines criticized Clooney’s move.

Meanwhile, the first two parts of my review of Jose Almonte’s book Endless Journey has appeared on ABS-CBNews.com

You can read them by clicking here:

I am submitting later today the third part, which is all about military coups and the military mindset – a topic that is very relevant today. Please watch out for it.