Thanks for this @Deadspin –

Here, have a GIF of Floyd Mayweather getting punched in the face. pic.twitter.com/ViL6cVVYPU 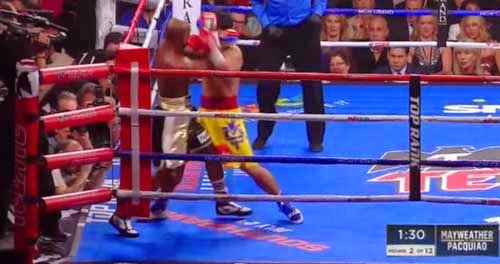 Courtesy of one of my favorite sites – Mashable

And here’s WHY Pacquiao lost to Mayweather. It’s all very scientific. Unlike our Comelec count. [this pic is courtesy of DZMM] – But here’s what many people think of the fight –

“The fight of the century” #MacPac pic.twitter.com/pHghBETXIX

I have a confession to make. I have never watched any of the fights of Manny Pacquiao, although I consider him a great boxer. And I’ve seen clips of his fight.

I can’t bear watching a blood sport, I guess. The frenzy, the excitement and the violence transports me back to the Roman times of the gladiators. Which is why the place where they are fighting now is so aptly named – the Arena.

You know that there is always that possibility that one of them might end up seriously injured.

You know that being punched by Floyd Mayweather is like being hit by a truck at breakneck speed.

You know that they are mauling each other until only one man is left standing and the other too bloodied up and dazed to care for the crown.

And so I would rather watch the crowd watching the fight. And in this case, the crowd happens to be pretty much the entire nation. Except for me and a few others who feel like me or whose hearts are too weak to take the excitement.

I will be posting here, for posterity, some of my observations of what’s happening. And link it to how the fight could possibly affect the political climate in the Philippines.

Minutes  ago, I asked on Twitter who were the Filipino politicians who have been spotted at the MGM Grand.

And filipinas @v_vangogh retweeted to me this photo I wonder if Vice-President Jejomar Binay is there too at MGM.

You can really tell that Manny Pacquiao is Pinoy.

Just before the fight, Mommy Dionisia prayed over him in all her finery. The photo is courtesy of my FOCAP colleague, Jamela-Alindogan-Caudron of Al Jazeera. A blessing in this feverish atmosphere.

I can follow the Pacquiao bout without watching the fight, just by listening to my neighbors erupt in screams and cheers. @Dave Tabaniag retweeted this photo from @BleacherReport Pacquiao seems to have the upper hand right now. But my hubby Alan told me that Mayweather is a methodical fighter who plans his moves and fights defensively. He may be trying to tire his opponent before going in for the kill.

This morning I got a call from my sister all the way in Canada asking me if I was going to watch the Pacquiao fight live. I said I wasn’t. It turned out she was. She had shelled out around 100 Canadian dollars to follow the excitement.

She also told me that she heard a TV announcer say that Pacquiao had bought 900 tickets for the fight. that’s around US$1 million she said.

Well, I told her, Manny Pacquiao must have wanted to bring his own cheering squad to counter Floyd’s home court advantage. And he can afford to pay.

Come to think of it, that expense must be tax-deductible for Pacquiao.

If Manny Pacquiao wins, he’s a step closer to the presidency.

If he loses, he could still make a go of it.

I am looking at his presidential prospects in an impartial, analytical way.

His problem would be – how to make his money last long enough for a shot at the highest office. Because like billionaire ex-senator Manuel Villar, he may have a hard time soliciting campaign funds since the wealthy businessmen will say that Pacquiao has enough money to finance his campaign. My hubby Alan is asking, can we call this fight “The Flight of the Century”?