I am deeply honored to attend next week’s Global Media Forum in Bonn by Deutsche Welle, courtesy of the Federal Republic of Germany.

The invite to me as a journalist-blogger came out of the blue. I’d like to thank those in the German Federal Foreign Office who recommended me to attend this forum because I am not officially employed by any news publication or outfit. I’m basically a creature of the digital age – a freelancer who has added her voice to the multifaceted discussions on global issues, thanks to the Internet.

And of course I could not have gone through this digital journey alone. We are all in this together.

Looking at the forum program, I find most of the topics exciting. They have mainly to do with working as a journalist in the digital age, reporting on freedom of speech, the digital jihad now going on even as I write this, religious radicalism, climate change, the plight of refugees, frozen conflicts, the need for access to cheap medicine, etc.

I understand over 2000 participants are expected from all over the world, many of them journalists, academics, officials of international organizations. It will be one huge cross-pollination of ideas.

Deutsche Welle has crammed so many events — 40 workshops and events in just a few days– that it is pretty hard to choose which ones to attend physically.

Fortunately, DW has promised to put all the forums and workshops in the cloud.

Just to give you an idea, there will be a session on “Reporting on post-conflict societies and frozen conflicts”.

I must confess, it’s the first time for me to think of a conflict as “frozen”. But that’s exactly what we have been having in Muslim Mindanao since 1976 – a frozen conflict.

There will be five speakers for this session – four senior journalists from Germany, Iraq, France, Bosnia And Herzegovina and Cambodia and an academic from France. I am curious to hear what the journalist from Phnom Penh will say.

The forum’s description of the journalist’s dilemma in reporting on frozen conflicts is right on the money. It states:

Over time, media consumers tend to lose interest in frozen conflicts. But a number of recent examples demonstrate that frozen conflicts can reignite from one moment to the next, and without sustainable conflict management and conscientious media coverage, they can quickly flare up again.

How can frozen conflicts be dealt with journalistically and how can media help to ensure that balanced investigative reporting is not replaced by bilateral propaganda? Journalists are frequently subjected to two contradictory criticisms: on the one hand they are expected to monitor conflicts, and their processes of transformation, that are no longer the focus of public attention; on the other hand, they are accused of stoking the fires of such conflicts and keeping them alive.

Personally, I have been reporting on the peace negotiations between Muslim rebels and the Philippine government since 1987. Finding fresh angles and new developments got harder and emotionally draining after a while. But thanks to South China Morning Post (HK) which sees itself as a regional paper, I got to report on the many twists and turns of the conflict and the peace talks.

I wonder if the local communist rebellion can also be classified as a “frozen conflict.”

Another highly interesting topic is – “Foreign policy in 140 characters: How technology is redefining diplomacy.” Matthias Lüfkens, founder and author of the study of “Twiplomacy”, will be a speaker. Lüfkens pioneered a study on how world leaders use Twitter to engage ordinary people. But he will be speaking on how the UN can yank itself into the digital age.

If the Internet permits, I will be tweeting during the forum.

To make all these happen, DW partnered with Amnesty International, the Grimme-Institut, the United Nations, the OSCE, Reporters Without Borders Germany and the Carnegie Endowment for International Peace. And of course a financial institution, the Foundation for International Dialogue of the Savings Bank in Bonn is co-hosting the event, along with the German Federal Foreign Office, the Federal Ministry for Economic Cooperation and Development, the City of Bonn and the Robert Bosch Stiftung, one of Germany’s largest private foundations that promotes the social and natural sciences. .

DW’s Global Media Forum is a stark contrast to another forum I once attended in Libya 28 years ago. That forum was attended by all the rebels in the world that then Libyan Leader Muammar Khaddafy wanted to thrust at the face of the United States and the western world. In short, those who were then considered “radical” by the west.

I wrote about the Khaddafy forum here.

I’ll keep you up to date on the Global Media Forum.

I’d like to apologize for not updating my blog as often as I would want to. I have many pending stories :(

I needed to finish certain assignments and to get together the documents for this trip.

Last month, I got to meet Michael Hasper, the Deputy Head of Mission of the German Embassy in Manila and Carmina Barcelon of the German press and cultural section. We talked about history, including German history. But I clean forgot to ask Hasper what he thought of President Benigno Aquino’s allusion to Sudetenland in relation to the South China Sea conflict.

Although he did have some very interesting observations about China.

Hasper is a history major, specializing in Prussian history. 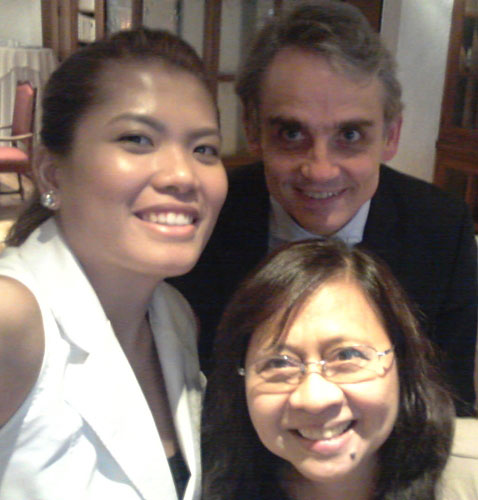 Before meeting Michael Hasper and Carmina Barcelon I had lunch with the lovely and very persistent Georgia Lovell, Second Secretary of the Australian Embassy.

She asked me about Philippine politics. I asked her about Australia and its politics. Such a huge subcontinent only has around 26 million people. But of course, my hubby Alan reminded me, a lot of it is desert and uninhabitable. 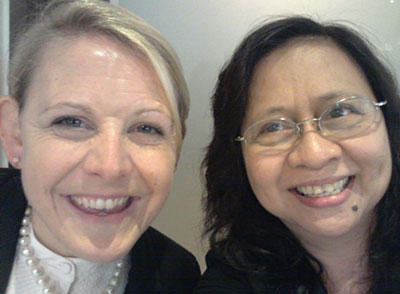