He also offers government a truce by year-end 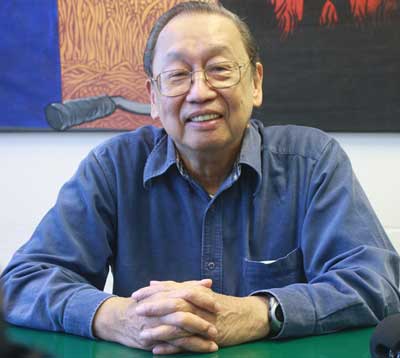 When I interviewed Jose Maria Sison in Utrecht recently, I decided to ask him about his thoughts on present day China and its ownership claim of the South China Sea.

It was my first time to interview Sison, of whom I’d heard a lot about from my late English professor Concepcion Dadufalza. Sison came from the English Department and not from the Political Science Department of the University of the Philippines.

Below is an excerpt of the piece I wrote today for South China Morning Post. I wonder what Beijing thinks of Sison’s statements.

Communist Party of the Philippines founding chairman Jose Maria Sison has turned on his former benefactor, China, amid the South China Sea territorial dispute between Beijing and Manila.

“China is obviously being greedy, claiming 90 per cent of the South China Sea,” Sison told the South China Morning Post in his office in Utrecht, the Netherlands, 43 years after his fledgling rebellion was secretly sent weapons and cash by China’s late leader, Mao Zedong.

Sison called China’s territorial claims “foolish” and “false” and added that “it would be like India claiming the whole of the Indian Ocean or Mexico claiming all or most of the Gulf of Mexico.”

Eight hours into the interview, when we were both slightly groggy from the lateness of the hour,  Sison told me he was willing to forge a truce with the government before the New Year and maybe even sign an agreement on political and social reforms.

I asked the founding chairman of the Communist Party of the Philippines (CPP) how this would be doable when President Benigno Aquino was about to step down from the presidency. He said he and former President Fidel Ramos did it before the latter stepped down in 1998 just by communicating through the fax machine and the telephone.

This should be easier to do now with digital technology, he said.

He also mentioned in passing that NPA rebels could later turn into forest guards and corporate guards to give them a means of livelihood.

And so, I wrote the story below regarding his offer. 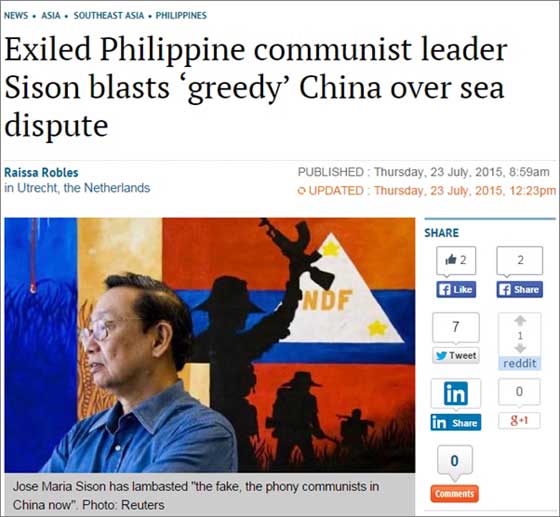 Just a backdrop on this issue. When I interviewed President Aquino one-on-one three months ago, I asked him about the peace negotiations with the CPP-National Democratic Front-New People’s Army. Here is that portion of my interview with President Aquino:

Raissa Robles: No? And you don’t feel bad, I mean, you don’t take it against them?

PRESIDENT AQUINO: Again, I really believe I sincerely dialogue with anybody so long as the other party also wants a really dialogue. But, we were exploring that special track that was proposed by Jose Maria Sison. They left the negotiations—the informal track and the formal track. Now, they say they are ready for it again. I think they have to demonstrate sincerity first.

Raissa Robles: I see. So there is a chance that negotiations can resume?

PRESIDENT AQUINO: I’m having a briefing on that this afternoon.