I would like to share with you all a digital Christmas card I received from Michael Hasper, the deputy head of mission of the German embassy in Manila.

It’s a monument of our national hero Dr. Jose Rizal “in winter”. [NOTE: This may not be a monument in Germany, but in Madrid or Manila, with digital snow added :). In any case, it looks pretty.]

Hasper, by the way, is a historian by training. I had a very interesting lunch with him and Ms. Carmina Barcelon of the embassy’s Press and Cultural Section.

I think of all heroes of that period I like Rizal, followed by General Antonio Luna. Rizal, because he had all the chance to compromise, and he didn’t. Luna, because he was the most passionate, the most irascible, the most hot-tempered man of that period, who tried to mould a citizen army.

I’d like to give special thanks to those who continue to hang around in this site. I know I have not been posting much and joining you much, but soon you will know the reason.

And we will all have a very exciting, BP-rising time next year. 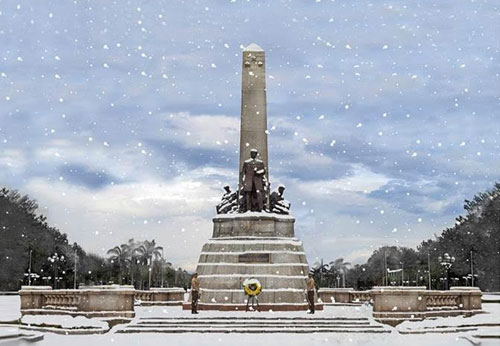